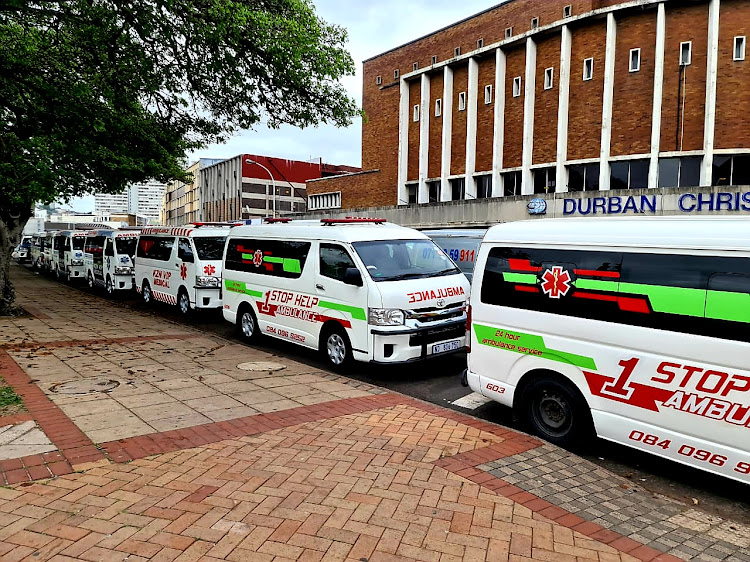 On Friday, the KwaZulu Natal Private Ambulances Association (KZNPAA) handed over a memorandum to the Road Accident Fund demanding that it paid up close to R10-million, owed to its members.
Image: supplied

The Road Accident Fund has been given until Saturday to pay close to R10m owed to private ambulance operators in KwaZulu-Natal — or services will be cut.

In a memorandum handed over to the RAF on Friday, the KwaZulu-Natal Private Ambulances Association (KZNPAA) threatened to withdraw its ambulances — belonging to more than 25 emergency medical services — unless its demands were met.

“Should you fail to meet our demands and deal decisively with this economic sabotage, we shall have no option but to return here on a more radical programme. Also, we shall withdraw our ambulances, without any further notice. Our right to approach courts to enforce our rights is duly reserved,” KZNPAA chairperson Andile Nduli said in the memorandum.

He explained that KZNPAA members were owed close to R10m in unpaid claims since the RAF “arbitrarily stopped processing payments”.

“We are informed [that] Covid-19 is the culprit. Strangely, the 'discriminatory Covid-19' only affected our claims. Is this how a caring government behaves?”

“KZNPAA members are serious business operators, providing employment to 450 employees. These employees in turn, support families. Private ambulances receive no financial assistance from the state or government. Our operations are funded from the funds primarily claimed from RAF. Considering that the last payment was received in February 2020 and no formal communication ever received from RAF about this, we hold the view that this is an economic sabotage,” he said.

Nduli said lack of payment from March had caused extreme harm and suffering to the businesses.

“Yet we still provide the service, for we understand that the victims are not responsible for this negligence. Many lives would have been lost, unnecessarily. However, “free service” can’t continue forever.”

He said KZNPAA was the collective voice of private ambulance owners in the province and was the “new kid on the block” as it was formed on September 1.

On Friday, KZNPAA members gathered in Durban to hand over the memorandum after driving in convoy through the city centre. It also suspended services to those, who did not belong to a medical aid scheme, for 24 hours.

KZNPAA spokesperson Garrith Jamieson told TimesLIVE on Sunday that the organisation had not yet heard from the RAF.

“We have not heard back as yet. We did hand over the memorandum and await the said timeline. If that is not adhered too we will then decide a way forward,” he said.