Another plastic nurdle scare in SA

Eastern Cape department calls for reports of any sightings 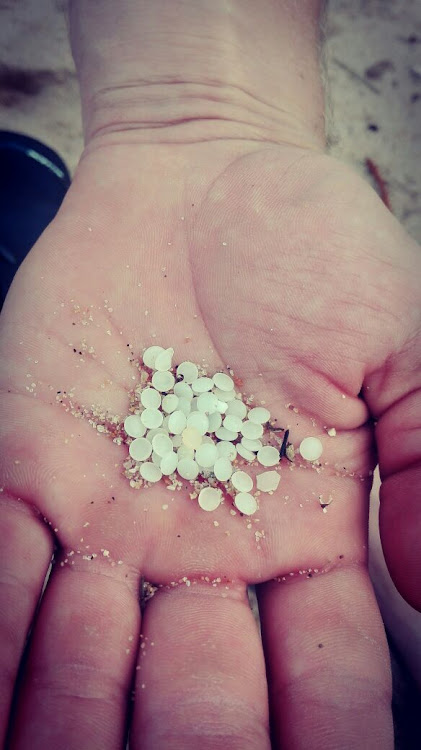 The Eastern Cape environment department says the little plastic pellets that caused a near-crisis in 2017 have been appearing on beaches in the Southern Cape and the authorities are trying to establish the source of the pollution and how far it has spread.

Provincial department of economic development, environmental affairs and tourism coastal zone management official Xolani Nikelo said on Monday he had discussed the matter with colleagues at the national environment department.

“Over the past couple of days, there have been reports of plastic nurdles washing up in the Southern Cape and on Cape Town beaches.

“It would seem there is a possible spill and these are not linked to the 2017 one that took place in Durban.”

Nikelo said nurdles were plastic pellets used in the manufacture of a wide range of plastic products.

“They are a huge ecological threat as they can be mistaken for food by marine animals and after being eaten can block the digestive system of these animals,” he said.

The department’s various coastal units had so far reported nothing but the call was now being disseminated to all the department’s public and private sector partners, he said.

“We would request to be made aware of any sightings or clean-ups of nurdles along our coast, to co-ordinate reporting thereof.”

On October 10 2017, nearly 50 tonnes of nurdles, imported from Saudi Arabia and set to be offloaded in Durban to distribute to the local plastic manufacturing industry, pitched overboard during a fierce storm.

The pellets were packed in bags in two shipping containers on a Mediterranean Shipping Company (MSC) vessel, which broke its moorings as the storm raged.

The containers and packaging ruptured, ejecting hundreds of millions of nurdles into the sea.

The Durban-based SA Association for Marine Biological Research warned at the time that, exposed to seawater, the nurdles would absorb pollutants including pesticides and would be consumed by marine animals.

While they would break up, they would never disappear and the concern was that these toxic particles could be ingested even by filter feeders, and become embedded in the food web.

Under instructions from the SA Maritime Safety Authority, MSC led a huge cleanup and large volumes of nurdles were removed from the sea and coastline.

Any new nurdle sightings should be reported to NMU Institute for Coastal & Marine Research research assistant Liza Rishworth (073-377-8851), who will forward these to Nikelo and his team.

Environmentalists head back to court to save Vaal River from neglect

Who will conserve conservation in Africa?

The DA are calling for Transnet to be held accountable for a catastrophic environmental disaster this week after a “pipeline theft incident” saw ...
News
7 months ago