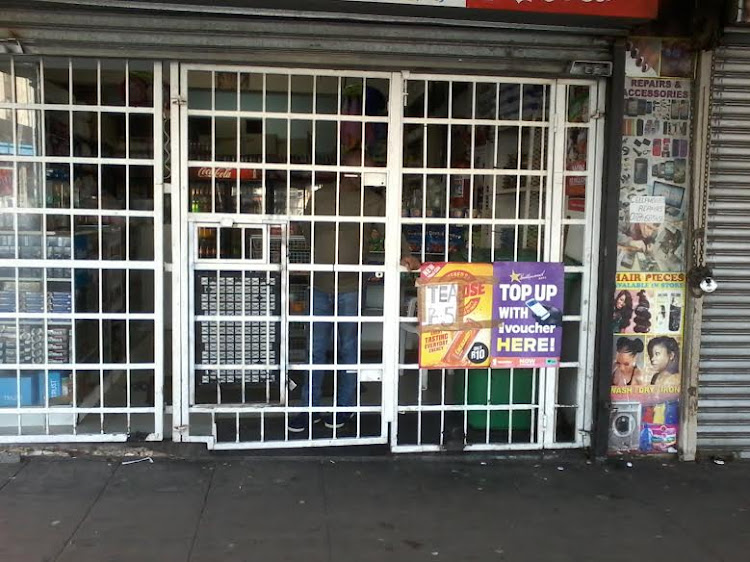 Shop owners in central Durban kept their doors closed on Wednesday after protests and looting this week.
Image: GroundUp/Nokulunga Majola

Immigrant shop owners in Durban say they fear for their lives after looting and vandalising of their businesses on Monday and Tuesday.

On Tuesday, protesters who said to be Umkhonto we Sizwe military veterans, known as MK Vets, with members of the People’s Revolutionary Movement, shut down businesses owned by immigrants in the Berea area, demanding that the owners go back to their countries of origin.

Zibuse Cele, leader of the protest group, said the protesters wanted immigrants to go back to where they came from so that there could be job opportunities for local youths.

Some of the shops were looted. Shop owners said the looters did not seem to be MK protesters but known drug users from the area who had joined the protest.

Military veterans who embarked on a campaign to “rid” Durban of foreigners blame ANC secretary-general Ace Magashule for failing to heed their cries ...
Politics
1 year ago

Garemu Askowu, who has a shop in Park Street, said looters came into his shop on Tuesday around 10am and took a TV, his cellphone, cigarettes and R8,000 cash.

“They told me to go back to my country. The total value of everything that was taken is close to R35,000. I was here in 2015 during xenophobia [violence]. I am scared that it might happen again. We don’t bother anyone; we are just trying to feed our families,” said Askowu, who is from Ethiopia.

Severin Byanngu, who owns a salon on Lancers Road, said a group of people entered his shop and took dryers, cellphones, and the handbags of staff and of two customers.

They took everything we own, we now have to start from scratch.

“I saw them come behind me and I told my brother to close the shop but it was too late. They started to take things and assaulted my brother. They took everything we own, we now have to start from scratch.”

Byanngu came to SA from the Democratic Republic of the Congo in 2005, and started the salon five years ago. He said he had experienced xenophobia before but he had not thought it would happen again.

“We cannot do anything without our equipment. We are scared. We don’t know if this is going to continue,” Byanngu said.

Most shop owners who spoke to GroundUp say the people who looted their shops were drug users. “They just got into the shop and took whatever they wanted. There was nothing we could do about it,” said a Malawian who did not want to be named.

A laundromat owner from DRC on the same street said protesters had used a hammer to break the burglar bars at the door but had not taken anything. “All they said was, 'Go back to your country.'”

On Wednesday, most shops were closed. Some shop owners were trading but only through bars.

The Africa Solidarity Network has slammed the attacks. Director Byamungu Dunia said the preamble to the constitution stated: “SA belongs to all who live in it.”

“The South African constitution protects the right of everyone to have their dignity respected and protected ... Being proudly South African cannot be faulted. However, marching under the South African flag while invoking slogans based on stigmatisation and false statements should be faulted,” Dunia said.

“Crime has no nationality. It is wrong to target people from particular countries or label them as criminals, drug dealers or people responsible for social ills. Law enforcement agencies need to hold accountable anyone who instigates violence based on anti-migrant rhetoric and xenophobia, following due process as South African law requires.”

He said non-South Africans had suffered wave after wave of xenophobic violence and lived in constant fear of being targeted.

“Protecting non-nationals from further attacks and ending impunity for xenophobic violence requires a long-term strategy and not just words on paper.”

With over 200 immigrant-owned shops in Thokoza and the Phola Park area of Ekurhuleni, Gauteng, protection rackets are big money.
News
1 year ago