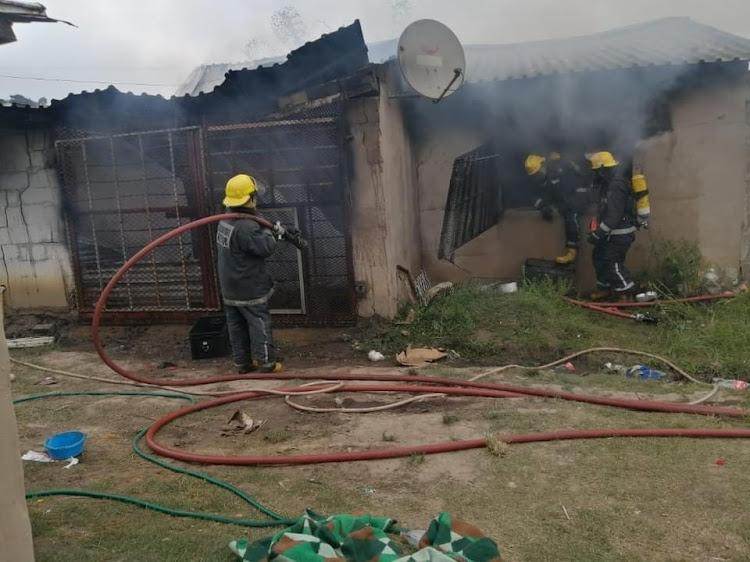 Once the blaze at a house in Ndwedwe was contained, hydraulic tools were used to pry open a solid security gate before firemen entered the home. The bodies of a 45-year-old male and four children aged between 13 and 16 were recovered.
Image: supplied

A Durban community tried to break windows and remove burglar guards of a home on fire in Ndwedwe, but they could not save a 45-year-old man and four teenagers on Sunday afternoon.

The anguished screams of the man and four teenagers, aged between 13 and 16, could be heard as flames engulfed the house.

“One caller also informed the operator that people were trapped in the home and they could be heard screaming for help.

“Reaction officers and paramedics were immediately dispatched to the location at 13:25  and, upon arrival, found the SA Police Service in attendance,” said Rusa director Prem Balram.

The house was completely engulfed in flames.

“Members of the public were attempting to force their way into the home by breaking windows and attempting to remove burglar bars, however the fire was too intense."

Balram said it was alleged that a tuck shop was being run from the home, where paraffin, diesel and petrol were also being sold.

The Ethekwini Fire department arrived and firefighters battled the blaze.

“Once contained, hydraulic tools were used to pry open a solid security gate before firemen entered the home and recovered the bodies of a 45-year-old male and four children aged between 13 and 16.

“All the bodies were recovered in the same room,” Balram said.

An 11-month-old baby boy has survived a dramatic crash late on Saturday night on the intersection of Kingfisher Road and William Nicol Drive in ...
News
7 months ago

Zimbabwean socialite and businessman Genius Kadungure, commonly known as “Ginimbi”, died instantly in a freak road accident in the early hours of ...
News
7 months ago