'I was called a demon': chilling testimony about Joburg church leader 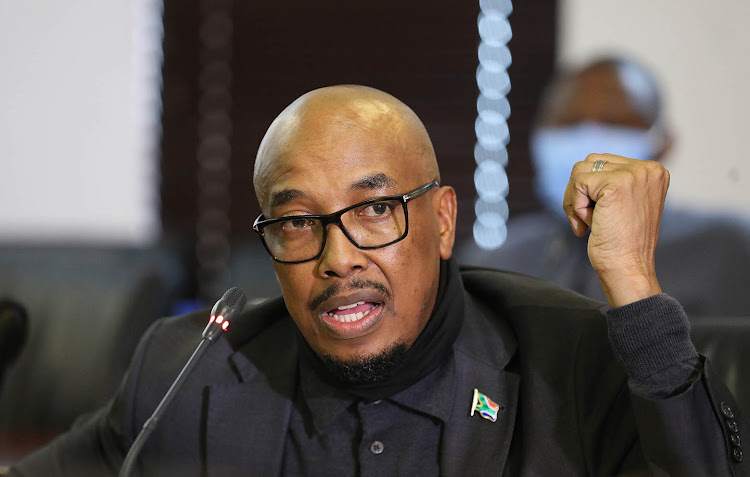 Solly Poopedi, who was a member of Rivers of Living Waters Ministries for five years, gave explosive testimony at the CRL Right Commission.
Image: Veli Nhlapo/Sowetan

Sexual abuse and money laundering allegations against pastors Tim Omotoso and "prophet" Shepherd Bushiri are "nothing" compared to those levelled against bishop Stephen Zondo, leader of Rivers of Living Waters Ministries.

That's according to former church member Solly Poopedi, who has embarked on a mission to "expose" Zondo. He was speaking during investigative hearings at the CRL Rights Commission, where several other witnesses gave explosive testimony on Tuesday.

"If people think Omotoso has done something bad, they must wait until victims of Zondo come forward," he claimed.

Poopedi told the commission he and his wife worked closely with Zondo and witnessed many "questionable" things. These included the alleged rape of women and men, endorsement of divorce, use of drugs and money laundering.

In some instances, people were allegedly paid to give false testimonies at church, including claiming they had been healed of HIV, and pensioners were asked to hand their hard-earned money to Zondo.

Zondo is expected to appear on a date yet to be confirmed to refute the allegations and give his version of events.

SowetanLIVE reported that Zondo declined to comment on the allegations when approached on Tuesday.

A former KwaSizabantu mission resident who joined the church in KwaZulu-Natal while in prison for arson has offered chilling insight into alleged ...
News
1 year ago

"When I started questioning things, I was called a demon. A lot is happening in that church. If I were to detail everything, it would take up the entire day," he said.

Poopedi said he was in a position to furnish the commission with evidence of some of the shenanigans, including messages in which sexual advances were made towards young women.

He said several cases had been opened against Zondo, but none had progressed.

He claimed many things had happened to those who questioned the ways of the bishop,  including him. He said he had survived an attempted assassination.

Among the witnesses was a woman who broke down in tears when she alleged  she was repeatedly raped by the prophet when she was just under the age of 10.

She said her childhood was stolen.

Detailing the first alleged rape encounter, she said she had been playing with other children when she was called inside to wash Zondo's socks.

I disguised myself as a boy. I never wore skirts like other girls. I felt strong and safe that way.

"He locked the door and I went to the bathroom to look for the socks. There were no socks to wash. He called me into the room. He was dressed in blue underwear and a white vest."

She could not share nor explain what had happened because the subject was taboo at the time.

She recalled having to avoid weddings and funerals because she feared she would bump into Zondo, who, at the time, was a cameraman or sometimes sold sweets.

"My journey was really difficult," she said when she detailed how she took defence classes from boys in an attempt to defend other young girls.

"I disguised myself as a boy. I never wore skirts like other girls. I felt strong and safe that way," she said.

Bushiri says the truth will come out one day.
News
11 months ago

Another witness who gave explosive testimony was a woman who sought refuge at the church after leaving an abusive relationship of five years.

"I went thinking I would get assistance because I was introduced to him by a family member. We had a father-daughter relationship, or so I thought," she said.

She recalled how she was once called to Zondo's office. On arrival, an usher asked her to undress so an anointing oil could be applied all over her body.

"I was shocked and I questioned this. Even though it did not make sense, I agreed because of desperation to get assistance," she said.

The incident destroyed me. I started drinking, wanting to numb my pain.

She recalled having strange dreams, including ones in which she had a sexual encounter with Zondo.

"I informed him of the traumatic dreams. He asked me to tell him each time I had one, and I did. Things got strange because he asked me not to tell my family."

She alleged that Zondo tricked her into attending to a church errand, which ended with her being raped at a hotel.

"I was confused on the road and kept asking where we were going. He never answered. When we arrived at the Formula One [hotel], he handed me keys and instructed me to walk straight and not answer any questions from anyone," she said and broke down in tears.

She alleged she was promised R75,000 in exchange for her silence.

"The incident destroyed me. I started drinking, wanting to numb my pain," she said.

Two months later she lost her mother and sister in a tragic car accident.

"I confronted him and asked him to wake my mother up from the dead because he claimed he was able to wake dead people. He told me he can't."

The commissioners were at times lost for words during the hearing. Chairperson Prof Luka David Mosoma said victims would be provided with counselling.

The hearings are due to continue on Wednesday and Thursday.

More details of abuse and negligence emerge at KwaSizabantu Mission

Allegations of sexual abuse and negligence at the controversial KwaSizabantu Christian Mission again surfaced on Tuesday.
News
11 months ago

After 35 years, KwaSizabantu rape accuser at last has some hope of justice

Rape and human trafficking accused Timothy Omotoso has lost his application for leave to appeal a decision by a Port Elizabeth high court judge not ...
News
11 months ago