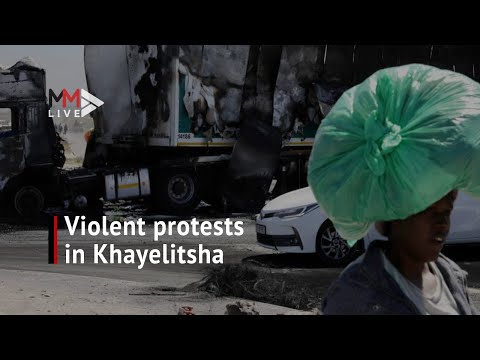 Residents of Khayelitsha in Cape Town took to the streets in protest on Thursday. They were reportedly protesting about housing and service delivery issues.

Three Golden Arrow buses and a truck were allegedly set alight by the angry mob.

Cape Town officials said that one of its Dial-a-Ride buses was stoned and that two excavators belonging to contractors were set alight.

"These were being used for the city’s Baden Powell to Khayelitsha water supply project. As a precaution, many services have been withdrawn, including the Covid-19 enhanced services water delivery trucks to areas in Khayelitsha," the city said.

Community leader Alex Madikane says the community is after “the simple things”.

“Today, tomorrow and Monday - we want water. If the water doesn't come, we'll still close this road. Take it or leave it,” he says.

Commuters travelling between Cape Town International Airport and the CBD were disrupted as the protest spilt over to the N2 highway.

The provincial education department raised concerns that some matriculants would be unable to get to exam centres to write their papers.

The police are monitoring the situation.

In a statement on Thursday afternoon, the city said that it would "not tolerate intimidation, violence and the destruction of public and private property and the infringements of rights of law-abiding residents in general".

The statement said the protesters were demanding services "after they illegally occupied land in recent months".

It said that there were "organised unlawful land occupations" during the Covid-19 lockdown, which saw new settlements being set up in many parts of the metro, including Khayelitsha, Kraaifontein and Mfuleni.

"These areas are now demanding immediate services. The city has been communicating for months that it is unable to provide immediate services, if at all, to all newly formed settlements at the expense of the existing services and programmes planned in accordance with its budget. The city does not have unlimited resources," the statement read.

It added that "some activist groups, political instigators and others in leadership roles" were condoning the land-grabs.

"Illegal occupations have a negative affect on planned projects, community facilities, basic services, beneficiaries of housing projects, and infrastructure expansion and maintenance. It also severely affects those who have illegally occupied land. Those who occupy land illegally knowing there are no services do so at their own risk.

"The city will continue to do everything in its power to prevent the illegal occupation of land, which is a criminal act and which hurts us all,’ said the mayoral committee member for human settlements, Malusi Booi.