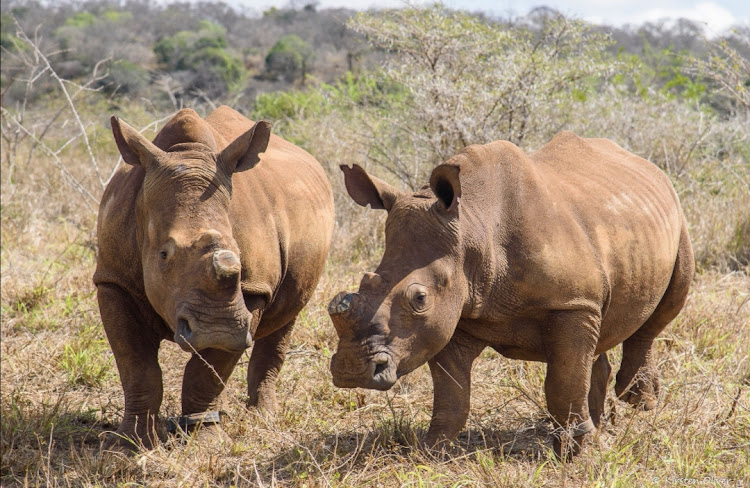 iMpilo and Makhosi have been returned to the wild.
Image: Kirsten Oliver

Considering that poachers have butchered more than 7,500 rhinos in SA in the past 12 years, rescuing every surviving orphan has become critical.

So there was good reason to celebrate recently when two orphaned rhino calves were given a second shot at life in the wilderness after being released into Somkhanda Game Reserve, a community-owned wildlife refuge in northern KwaZulu-Natal.

The first rhino calf, now named Makhosi, was rescued in 2016 after she was found dehydrated and starving in a local game reserve in the aftermath of a severe drought that dried up water resources and grazing.

Both calves were taken to a rhino orphanage in KwaZulu-Natal, where they were nursed back to health.

Because of previous attacks on orphanages and other rhino-holding facilities where rescued animals have been killed for their horns, the name and location of the orphanage is being kept confidential.

Now, nearly four years after the first calf was rescued, the animals have been returned to their wild habitat — both fitted with tracking devices for security reasons.

Today was a historic day at Somkhanda Community Game Reserve when two rhino orphans were released back into the wild,...

“Rehabilitating the two calves was not an easy task as rhino are highly dependent on their mothers for the first few years of life, but the staff at the orphanage are excited that we have finally reached the stage when we have to let them go back into the wild, where they belong,” said Megan Lategan who leads the rehabilitation team.

“This is a proud moment for us, this is our mission — to release animals back into areas where they can begin to replenish wild populations,” she said.

The operation to return them was made possible through the conservation group WILDTRUST, with financial support from Albus Environmental and the Aspinall Foundation.

Lategan said that having survived such traumatic experiences the two calves later formed a close bond.

By keeping them together as a pair they were likely to draw on each other’s strengths while adapting to a wild environment.

“Since 2007, when rhino poaching saw a sudden and dramatic increase, it has been taxing on all involved to stay motivated and to believe there is light at the end of this dark tunnel fuelled by international greed and crime syndicates,” said Dr Roelie Kloppers, CEO of WILDTRUST.

In preparation for their release the two sub-adult animals were dehorned and then habituated in a boma at Somkhanda for over a month.

All human interaction and contact was completely stopped and their safety was closely monitored by wildlife rangers and the anti-poaching unit until their release earlier this month.

Kester Vickery, head of the Conservation Solutions group which helped to capture and transport the animals, said: “Given the current poaching pressure facing the white rhino population in SA, every animal is important no matter the cost or effort involved.

“It’s an example of how a tragic beginning can have a positive ending.”

As international borders reopen, the government has warned game reserves around SA to prepare for a possible resurgence in rhino poaching.
News
6 months ago

The Covid-19 pandemic has brought an unexpected benefit to rhinos and other wildlife - a decrease in poaching during the first half of the year.
News
7 months ago
Next Article