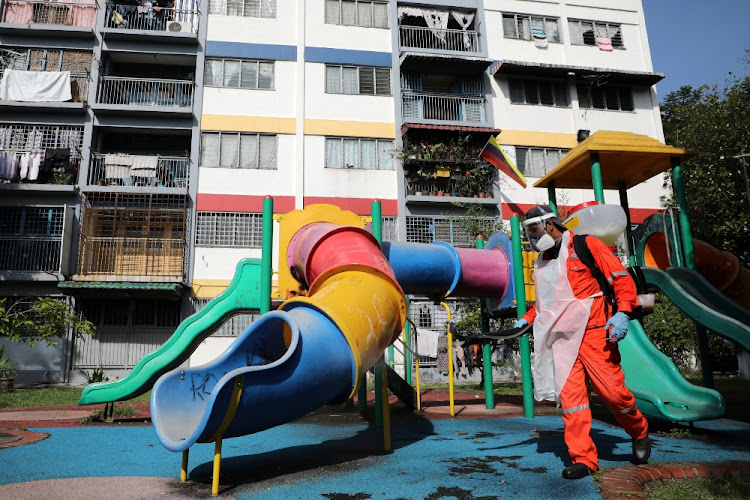 A worker sprays disinfectant at a playground amid the coronavirus disease outbreak in Kuala Lumpur, Malaysia on November 15 2020.
Image: REUTERS/Lim Huey Teng

France has registered 27,228 new confirmed cases of Covid-19 and a further 302 deaths from the disease in the last 24 hours, health ministry data showed on Sunday, although there were signs of a fall in the rate of new cases.

France has now recorded 1,981,827 confirmed Covid-19 cases in all, while 44,548 people have died from the virus - the seventh-highest death toll in the world.

Nevertheless, the data marked a slight decrease compared with the previous day's Covid-19 figures in terms of new confirmed cases and deaths.

France is in the middle of its second lockdown aimed at curbing the spread of the virus, following its March-May shutdown.

President Emmanuel Macron's government has set a December 1 deadline for this lockdown, although the government has said it could extend it beyond that if it feels the numbers are not falling fast enough.

US CDC reports 244,810 deaths from coronavirus

The CDC reported its tally of Covid-19 cases as of 4pm ET on November 14, compared with its previous report released a day earlier. The CDC figures do not necessarily reflect cases reported by individual states.

Eswatini Prime Minister Ambrose Dlamini has tested positive for Covid-19 and is self-isolating at home, he said in a government statement on Sunday.

Dlamini is asymptomatic and feeling well, he added.

Second wave has not arrived yet, says Zweli Mkhize as he heads to 'partying' Eastern Cape

This was announced by health minister, Dr Zweli Mkhize, during a media briefing on the country's response and readiness to deal with a possible resurgence.

Covid-19: Second wave has not arrived yet, says Zweli Mkhize as he...

India to fly in medical staff, ramp up testing amid rising cases in Delhi

India will fly doctors in from other regions, double the quantity of tests carried out and ensure people wear masks in efforts to contain the coronavirus spread in the capital New Delhi, home minister Amit Shah said on Sunday.

"Amit Shah also directed that the hospital capacity and availability of other medical infrastructure should be ramped up considerably," the ministry of home affairs said in a statement on Sunday.

While India's daily increase in cases has been under the 50,000 mark for eight straight days, around half its record peak, the city state of Delhi has recorded over 7,000 cases a day over the last five days - a record level.

The daily number of new deaths reported within 28 days of a positive test fell to 168 from 462 on Saturday, taking the cumulative total to 51,934.

Italy has registered 33,979 new coronavirus infections over the past 24 hours, the health ministry said on Sunday, down from 37,255 on Saturday.

The ministry also reported 546 Covid-related deaths, from 544 the day before.

Tebboune, 75, was flown to a German hospital 19 days ago after he tested positive for the coronavirus.

Catholics held an open air mass in the western French city of Nantes on Sunday to protest against Covid-19 restrictions, under which masses are banned in churches.

Some Catholics also gathered by the Saint Louis Cathedral in Versailles, near Paris, but police banned a demonstration planned by Catholics in the capital.

In Nantes, which is home to one of France's best known cathedrals, dozens of people, wearing face masks, knelt down with umbrellas in pouring rain to pray in the central Graslin Square, and to support calls for public masses to resume.

The Chinese city of Jinan said over the weekend it had found coronavirus on beef and tripe and their packaging from Brazil, Bolivia and New Zealand, while two other provincial capitals detected it on packaging on pork from Argentina.

China is ramping up testing on frozen foods after repeatedly detecting the virus on imported products, triggering disrupting import bans, even as the World Health Organisation says the risk of catching Covid-19 from frozen food is low.

They entered through ports in Shanghai, it said, without naming the companies that shipped the products to China. More than 7,500 people who may have been exposed tested negative for coronavirus, it said.

The frozen pork cases were reported in Zhengzhou, capital of central China's Henan province, and Xian, capital of Shaanxi. It was not immediately clear if the two cases were connected.

New coronavirus infections in Iran have risen by 12,543 in the past 24 hours, a record high, taking the cumulative total to 762,068, the health ministry said on Sunday.

Ministry spokeswoman Sima Sadat Lari told state TV that 459 people had died in the past 24 hours, pushing the death toll in the Middle East's worst-hit country to 41,493.

Germans should brace for another 4-5 months of severe measures to halt the rise in coronavirus infections and should not expect the current rules to be eased quickly, economy minister Peter Altmaier told weekly Bild am Sonntag.

“We're not out of the woods yet”, he said referring to infection numbers. “We cannot afford a yo-yo shutdown with the economy constantly opening and closing.”

Germans should brace for 4-5 months of severe Covid-19 measures, says...

French police stepped up controls in Paris over the weekend to ensure residents were complying with strict lockdown rules imposed to curb the spread of Covid-19, amid signs that some people were breaching them.

Prime Minister Jean Castex has said people are not abiding by the rules as strictly as during the first lockdown back in the spring.

Police had to break up an illegal party hosting up to 400 people at Joinville-Le-Pont near Paris early on Saturday.

Under the lockdown, in force since the end of October, people must stay indoors apart from trips to buy food or other essential goods, or for a brief hour of exercise. They must also carry signed documents to justify why they are outside.

Police were checking motorists travelling through the Bois de Boulogne in western Paris to make sure they had the necessary signed documents and were wearing masks, as required by the law.

The European Commission's Competition Commissioner Margrethe Vestager said on Sunday she would self-isolate next week and work from home after one of her co-workers tested positive for Covid-19.

"I have been informed that a working relation has tested coronavirus positive," Vestager said on Twitter. "Luckily, he has no symptoms and I wish him all the best. I have been tested, am now in quarantine and will work from home the coming week."

SA's Covid-19 related deaths stood at 20,206 on Saturday evening, after 53 more deaths were recorded, the Department of Health said.

It said the cumulative number of detected Covid-19 cases was 749,182 by Saturday evening, with 2,267 new cases detected.

“The cumulative number of tests conducted to date is 5,110,384 with 23,497 new tests conducted since the last report. Regrettably, 53 more Covid-19 related deaths have been reported,” the department said.

Tesla Inc CEO Elon Musk said on Saturday he "most likely" has a moderate case of Covid-19, as he continued to question the accuracy of the tests.

"Am getting wildly different results from different labs, but most likely I have a moderate case of covid. My symptoms are that of a minor cold, which is no surprise, since a coronavirus is a type of cold," Musk wrote in a tweet.

He did not mention whether the results were from polymerase chain reaction tests, which are more accurate than rapid tests.

Am getting wildly different results from different labs, but most likely I have a moderate case of covid. My symptoms are that of a minor cold, which is no surprise, since a coronavirus is a type of cold.

Don’t pin your hopes on the Covid vaccine announced this week, South Africans have been told.

The chance of SA getting a significant volume of the vaccine in the next few months is “extremely unlikely”, said Wits University professor of vaccinology Shabir Madhi. “The most highly optimistic projection is that we’d be fortunate to get any by the end of the second quarter next year.”

He said the announcement by Pfizer and BioNTech that their vaccine was 90% effective was exciting because “other vaccines using the same target may also show similar efficacy”.

A leading medical expert has called for the banning of this season’s matric rage parties, saying he would consider it “criminal and utterly irresponsible” if the government allowed them to continue.

Shabir Madhi, a professor of vaccinology at Wits University, said in the context of Covid-19 the organisers should be held accountable for the resurgence of infections he predicted within three to four weeks of the events.

Madhi’s comments come in the wake of President Cyril Ramaphosa’s coronavirus update this week, in which he again warned against large gatherings.

'People’s lives matter more than a custom': Would-be initiates want to cut to the ritual chase

Thousands of boys desperate to undergo the traditional rites of passage marking entry into manhood are praying the lockdown ban on initiations will be lifted in time for the summer season.

Even if it is, the age-old ritual for the transition to manhood faces drastic changes to eliminate the sharing of food and drink in an attempt to minimise the risk of Covid-19 transmission.

The traditions of drinking traditional beer from a communal calabash and eating meat from a shared platter, which signify oneness, respect and consideration for others, are set to make way for individual cups and disposable plates.

The UK recently announced plans to conduct Covid-19 human challenge trials to accelerate the development of vaccines and treatments.

In these trials, researchers can test a vaccine's efficacy in a matter of weeks by giving young, healthy volunteers (who receive the best medical care) a vaccine candidate and then deliberately exposing them to the coronavirus.

This is far quicker than conventional Phase III trials, which rely on incidental exposure to the virus and take months or even years to return useful results.

G20 finance ministers have agreed for the first time on a new joint framework for restructuring government debt, anticipating that the coronavirus pandemic will leave some poor countries in need of deep relief.

The Covid-19 pandemic is straining the finances of some developing countries and the G20 ministers said on Friday they recognise that more will need to be done to help them than the current temporary debt freeze, which will be extended until June 30 2021.

Major creditors, including China, will be expected to follow the common guidelines laying out how debt that is deemed unsustainable can be reduced or rescheduled.

Commenting on the latest official unemployment figures this week, President Cyril Ramaphosa said he was encouraged that 600,000 more people became employed between the second and third quarters.

"This shows that green shoots have emerged as economic restrictions were lifted and the epidemic brought under control," said Ramaphosa.

He was gilding the employment lily just a little. The figures from Stats SA show, in effect, that of the 2.2-million jobs that were lost in the hard lockdown second quarter of this year, 539,000 returned in the third quarter, as the lockdown began to be lifted.