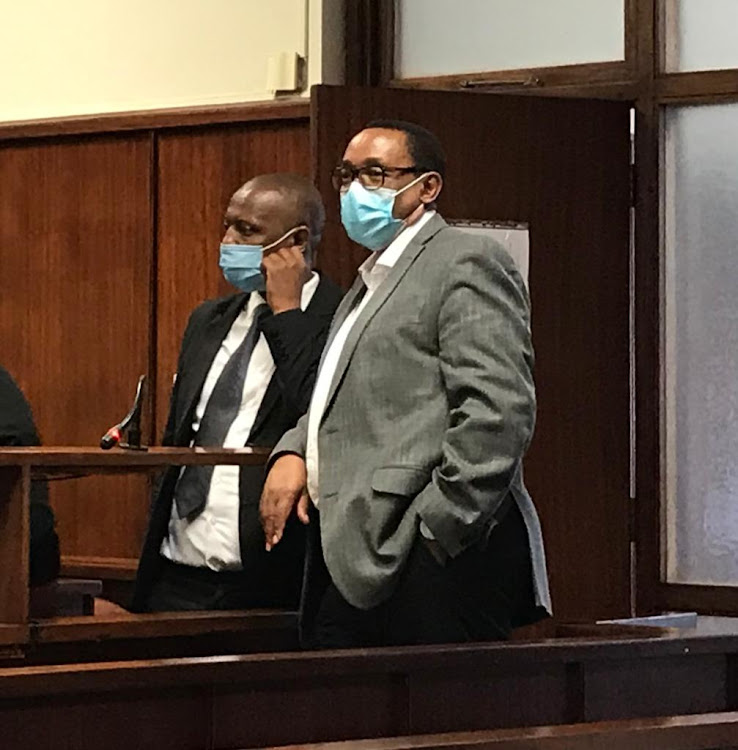 Embattled eThekwini city manager Sipho Nzuza was released on Monday after handing himself over to the Hawks earlier in the day for violating his bail conditions in the ongoing R430m Durban Solid Waste (DSW) tender fraud matter.

Nzuza, out on R50,000 bail, handed himself over to members of the Hawks' clean audit task team after they were made aware that he had violated certain aspects of his strict bail conditions after his suspension.

According to the state, a warrant of arrest was granted for Nzuza last week after he violated at least three conditions, in that:

eThekwini city manager Sipho Nzuza (right) appears in the Dbn specialised commercial crimes court for violating his bail a conditions related to the R430m ongoing 2016 DSW tender fraud case he has been implicated in. He is seen here with his defence @TimesLIVE @SundayTimesZA pic.twitter.com/SS0BloUkew

After a lengthy court session during which the matter was stood down to allow magistrate Garth Davis to attend to other proceedings, the court heard that the defence and state had come to an agreement to amend Nzuza's bail conditions.

Nzuza's attorney Doda Madonsela said during a discussion with the state that  the defence agreed that it would not be necessary to waste judicial time.

“As a result we have agreed with the state with what appears to be grey matters relating to two bail conditions.”

Senior state prosecutor Hazel Siraramen said among the amendments of the conditions, Nzuza would now not be allowed to have anything to do with eThekwini tender processes, no matter the value of the tender concerned.

Davis warned Nzuza and said should he breach his conditions he runs the risk having his  bail cancelled and being placed in custody until his trial.

“History tells us that corruption matters take a long time. At least now, the die is cast, and you know exactly what is expected of you. You need to understand that the court is trying to prevent something from happening that will undermine the administration of justice,” said Davis.

Nzuza was released from custody and his bail extended until his next appearance on December 10.

The state has agreed to finalise its forensic audit report into the R430m corruption scandal involving former eThekwini mayor Zandile Gumede and her ...
News
1 year ago