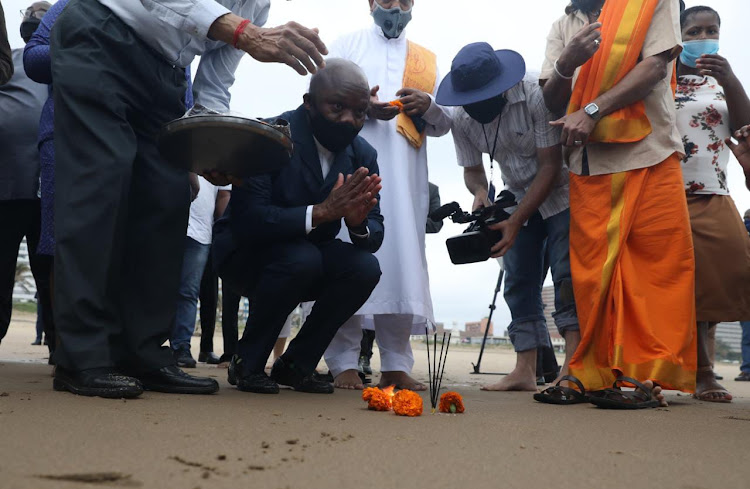 KwaZulu-Natal premier Sihle Zikalala at Monday's commemoration of the arrival of Indians in SA 160 years ago. The event was held at Durban's Addington beach.
Image: Sandile Ndlovu

Indians who are born in SA have no other home.

That's the word from KwaZulu-Natal premier Sihle Zikalala, who led a commemoration for the 160th anniversary of the arrival of Indians in SA on Monday.

Zikalala was joined at Durban's Addington beach by a delegation of government, religious and community leaders to mark the historic event, which included a small inter-faith prayer and the dispersing of marigolds into the sea as a symbolic gesture.

"As a South African society, we are quite diverse, with different origins and different cultures, but we are one nation.

"We are here as part of the commemoration of the arrival of the Indian community in SA, who arrived here in 1860 as slaves brought by the British.

WATCH:KZN premier Sihle Zikalala paid homeage to the arrival of the 1860 indentured Indians in Durban on Monday
Video:Sandile Ndlovu@TimesLIVE pic.twitter.com/lvYleMsZ2k

He said Indians who originated here "have no other home except SA".

Zikalala encouraged communities to draw from their cultures and heritage to build a united country, "which would not be described by discrimination in terms of race and gender, but a nation where there would be development and prosperity for all its people".

The commemoration continued at the city's 1860 Heritage Centre.

The Hindu Maha Sabha says the move is proactive, while calling on Hindus to mark the festival virtually
News
1 year ago

An ad blaming bunny chow for indigestion is offensive because of the dish's roots in the days of indentured labour, a consumer told the advertising ...
News
1 year ago