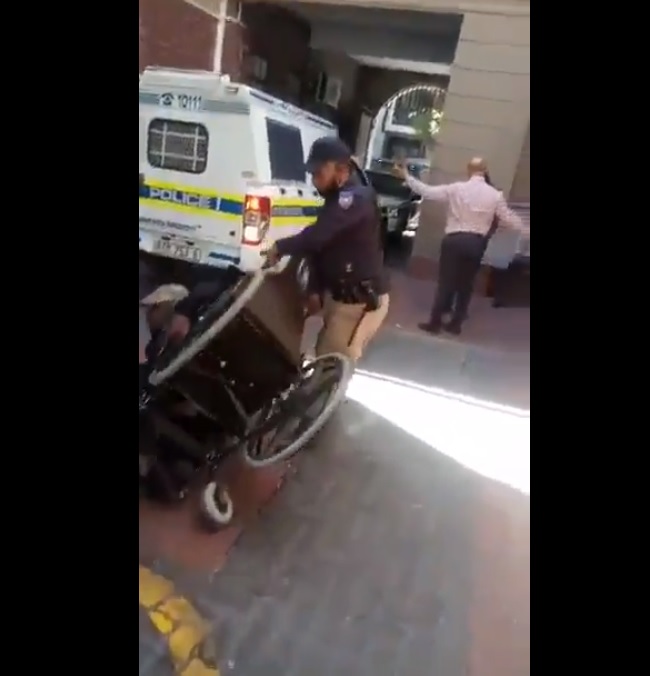 Two of the city's metro police officers have been suspended over the incident.
Image: Screengrab of video

Cape Town mayor Dan Plato has apologised for the conduct of two metro police officers caught on video throwing a man from his wheelchair during a verbal altercation on Thursday.

The officers, employed by the city, were suspended pending the outcome of a full investigation.

In the footage, shared widely, one officer is seen placing his leg against the wheelchair. A second officer grabs the wheelchair and tips the man on to the ground.

The man hangs on to the wheel of the wheelchair before the officer pulls it further away during an apparent verbal altercation.

“Why are you doing this to this old man?” asks an unidentified man in the clip.

Before the video ends, a man walks towards the person filming the incident and says: “Get out, because you are recording at the police station ... otherwise we are going to arrest you. You better get out.”

No matter what the circumstances were here this is unacceptable pic.twitter.com/47zWqDxcm7

Plato said in a statement that he discussed the incident with the city’s safety and security executive director Richard Bosman, who confirmed the officers were immediately suspended pending the outcome of an investigation.

“I want to apologise unreservedly to the member of the public, whose name is not yet known to me, for what he experienced this morning,” said Plato.

“The manner in which this situation was handled is not what we expect from our staff.”

Cop arrested for molesting victims - while 'investigating' their rape cases

A Free State police captain accused of sexually assaulting a child while asking her if she missed her rapist is now under arrest over this, as well ...
News
1 year ago

The case against the three police officers accused of killing Eldorado Park teen Natheniël Julies has been postponed to December 8 for further ...
News
1 year ago

The man who was dragged naked from his Cape Town shack on Wednesday has appealed to President Cyril Ramaphosa to help him reclaim his dignity.
News
1 year ago