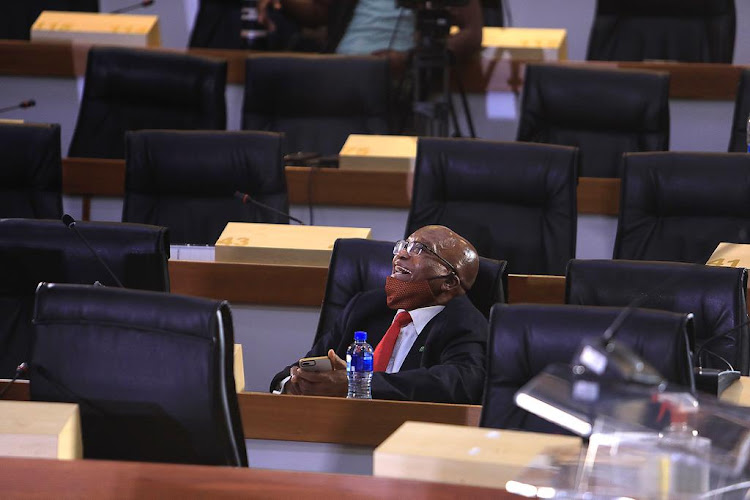 The Jacob Zuma Foundation has issued a statement in support of the former president's decision to walk out of the state capture inquiry.
Image: Alon Skuy

The National Association of Democratic Lawyers of SA (Nadel) has been left perplexed by the Jacob Zuma Foundation's statement that the former president “would rather face jail” than appear before the state capture inquiry.

On Monday, Nadel said the foundation's statement, released a day after Zuma and his legal team staged a walkout from the inquiry — is “an affront to our constitutional order”.

“The foundation’s assertion that former president Jacob Zuma would rather go to jail than face up to the inquiry is perplexing, bearing in mind the commission was set up by Zuma. When he established it, he was unequivocal in expressing his confidence in all judges in the country.”

It said Zuma's decision to “excuse himself” from the inquiry, without asking for permission from chairperson deputy chief justice Raymond Zondo, despite a valid summons having been issued and without a court order setting aside the summons, threatens the rule of law.

It said the inquiry should not be distracted from the important task by transparent attempts to undermine its legitimacy.

“Nadel expresses its confidence in the chair of the commission and has no doubt he is an independent judge who will always abide by the constitution in conducting the investigations and hearings.”

On Friday, the Jacob Zuma Foundation issued the statement supporting Zuma and his legal team's decision to walk out of the inquiry.

Zuma gets away; will petrol bombers too?

If, by the time this column appears, Jacob Zuma has not been arrested and charged with contempt of a legal subpoena, then deputy chief justice ...
Opinion & Analysis
1 year ago

State capture: Time not on Zondo's side as he deals with Jacob Zuma