But Sassa beneficiaries still have to queue for hours 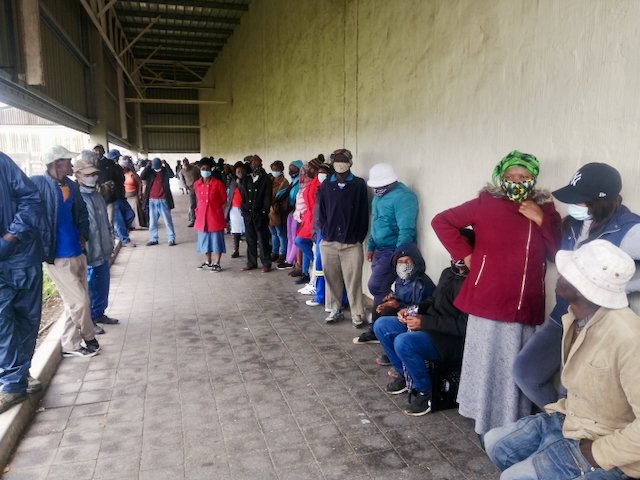 People are still having to queue for hours, and sometimes all night, for social grants or documents from the department of home affairs, in spite of warnings by health officials that this is contributing to the spread of Covid-19 in the Eastern Cape.

In their epidemiological report for November 12, the Eastern Cape health department and the National Institute for Communicable Diseases warned that “self-defeating tendencies or practices by government departments, including long queues with no social distancing during the payment of social grants, at the department of home affairs and full-load taxis are all contributing to the fast spread of the virus”.

When GroundUp visited earlier this month, about 300 Sassa beneficiaries queued at Kenako Mall’s post office in Port Elizabeth with no social distance between them. It was raining and everyone took cover next to the shops. Some people were chatting with their masks under their chins, while some had no masks at all.

Joseph Ngeyana from KwaDwesi Extension said, “I left my house at 3.30am and walked here to get my R350. The nearest post office to me in KwaDwesi is always full.”

The impasse between traditional leaders and government over reopening initiation schools nationally ramped up on Wednesday as the national working ...
News
1 year ago

Lindile Tyali from Soweto-on-Sea said, “I have been in this queue since 6am. There is no food at home. People are frustrated and are more concerned about their money than keeping social distance. Almost everybody here is wet because we don’t have taxi fare to come here.”

Some people had slept outside the main entrance to the Motherwell Shopping Centre to collect their Covid-19 grant from the post office, braving the drizzle through the night.

Most had face masks but there was no social distancing and when the office opened, people jostled each other to hand over their IDs to officials.

Anele Gaba and his brother had joined other beneficiaries to huddle around a fire made from old car tyres collected from a nearby business.

“I am concerned that many people will get infected with Covid-19 due to the exposure to the bad weather and most people did not wear masks when we were around the fire,” said Gaba.

“People are dying in Motherwell and other areas around the metro from the Covid-19 pandemic but poverty and desperation are forcing people to risk contracting the disease. The conditions are very bad and expose beneficiaries to the risk of contracting the disease and spreading it to their families and communities,” said Gaba.

Gaba, who works as a security guard, said some people were going out of Motherwell to places where queues were shorter but he and his brother did not have money for transport.

“Sassa is concerned and will continue to make efforts to minimise the spread of the virus. Beneficiaries are urged not to come to post offices without having received a text message calling them to collect their grants on a specified date and branch,” he said.

SA recorded more than 3,000 Covid-19 cases on Wednesday, as the country deals with an apparently rising infection rate.
News
1 year ago

He said Sassa had come up with a system where people could apply for a grant, have their application approved and be paid without having to visit an office. But “on payment we were faced with numerous challenges chiefly emanating from the population we seek to serve. The majority of this targeted group does not have bank accounts nor do they have cellular phones.”

He said this had compelled Sassa to use the Post Office to pay these beneficiaries.

In East London, when GroundUp visited, people said they had been queuing outside the department of home affairs since 5am. There was no social distancing. Everyone had masks because entry without a mask was prohibited, but in the queue few people were wearing them. People said they couldn’t breathe properly or couldn’t talk with a mask on.

This is the only home affairs office in East London that issues IDs.

Sizeka Ndontsa, from Mooiplaas just outside East London, said there were already people queuing when she arrived at 5am. She was there to collect her ID book which she has been waiting for since July. There were no marks on the ground and no social distancing.

“The sad thing about this home affairs is that their system is always down now. Instead of standing in a line we ended up sitting on the pavement. Hence you find us all sitting close to each other. We want to be closer to the door so we can hear when the staff comes out to talk to us,” she said.

She said she would only wear her mask when she went inside.

GroundUp travelled in two “amaphela” taxis which carry four people. Neither driver was wearing a mask, and not all the passengers. One driver said he only put his mask on when he saw police officers.

Another insurance company has failed to defend its decision not to pay a client for losses incurred due to the Covid-19 lockdown.
News
1 year ago