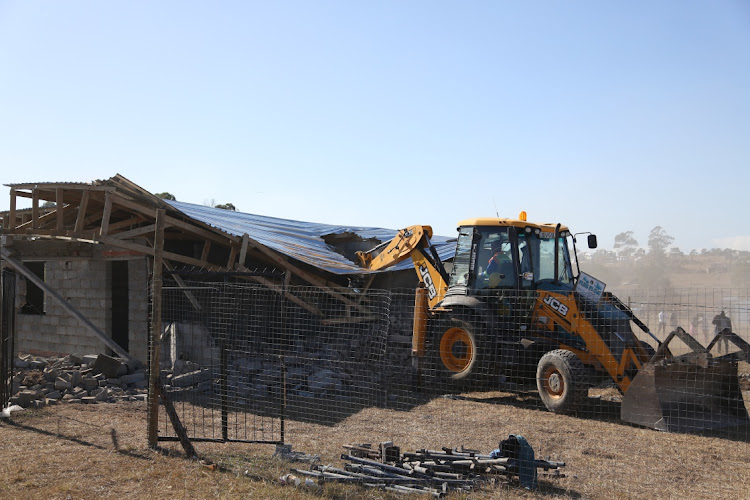 Residents of Airport Park next to the East London Airport who lost their homes and possessions during government demolitions are waiting to hear when a court-ordered rebuild will take place.

It has been more than a month since the high court in East London ruled that the department of public works and infrastructure carried out an illegal eviction when it demolished 108 lived-in shacks and brick houses on July 27.

Judge Belinda Hartle’s ruling means government departments and municipalities that falsely claim shacks are “unoccupied” before bulldozing them without an eviction order are breaking the law. They will be forced to replace everything they have destroyed.

Hartle rejected the testimony of Vuyani Maqetuka, the public works department’s head of security in the Eastern Cape, who said only certain “incomplete and unoccupied structures” had been demolished. Video evidence clearly showed it was a lived-in community.

Asked if the provincial department would abide by the order, spokesperson Thami Mchunu said the court order was unclear and that “the implementation of the order is a challenge”.

Mchunu stands by the department’s argument, which Hartle rejected. “The department maintains that no eviction was done, but our actions [were] purely in line with an existing court order, which authorised the department to demolish and dismantle unoccupied structures illegally erected on our premises. The judge, however, appears to have a different interpretation of dismantling and demolishing ... The applicants are yet to provide actual title deed ownership as part of their defence.”

Airport Park residents have not been asked to provide a defence, and Hartle’s order is clear: the structures must be rebuilt to the same standard, even without title deeds. Hartle added that residents whose homes were demolished did not have to provide further proof that they were living there. “In my view, the applicants need to do no more than [confirm] that these structures which were demolished by the [government’s] own admission among the 108 targeted were their homes. What more should they say?”

Mchunu said the department would not meet the Airport Park residents until it had more clarity, adding that residents had not provided any specifications or details about the homes that were demolished. “This, therefore, renders the judgment open to any claims relating to the size and structures to be reconstituted.”

He did not respond when asked if public works would appeal the judgment.

Eviction by another name

Hartle rejected the argument that destroying so-called “unoccupied” structures means no actual person was evicted, so no eviction order was necessary. “The dismantling or demolishing of a residential structure is tantamount to an eviction, and calling it by another name does not change the fact that it remains an eviction.”

Public works was granted a court order in 2017 permitting it to destroy any new homes built in Airport Park. But Hartle said that did not give the department permission to arrive with bulldozers without any notice and without a new eviction order granted under the Prevention of Illegal Eviction from and Unlawful Occupation of Land Act. This gives alleged “unlawful occupiers” 14 days’ notice and the chance to contest the eviction order.

Hartle added that the Disaster Management Act prohibited evictions while SA remains under a national state of disaster, which has been extended to December 15.

Residents of Airport Park say it is a peaceful community of people longing for their homes to be rebuilt. Some had to leave the area after the demolition while others had to squeeze into shacks with relatives.

“It is not like a location here. It is like a village. We are a very happy family. We know each other. We have big yards, and anyone can keep livestock here without it being stolen,” said Siphokazi Mtshaolana.

Before the eviction, children walked to school together safely and the presence of houses and shacks was welcomed by workers from neighbouring areas, who had previously been attacked while walking to work when the land was filled with dense bush.

Most of the residents who moved to Airport Park over the years were born between 20 and 60 years ago about 5km away in Fort Grey or Bhongweni.

Frustrated after first being promised Reconstruction & Development Programme (RDP) houses in the area and then later being told they did not qualify, residents cleared the bush next to the airport fence and moved in, some building shacks and others taking out R200 000 loans to build five-bedroom brick houses.

Mtshaolana, 53, her children and grandchildren lived in three shacks in Airport Park, but two of their homes were demolished in July. Her family of nine now lives in a one-room shack.

“Nine people at the time of the Covid! In one shack! There were even people in our community who work at Pick n Pay who were sick with coronavirus, but they were quarantining in their one-room shacks with their whole families,” she said.

It is illegal to confiscate food, clothing and books during an eviction, but Mtshaolana said the sheriff took everything her children had. Nothing has been returned.

“They even took my children’s shoes ... one of my kids had to go [out] wearing one takkie only. When they came to my house, my kids were eating breakfast, and the kids were instructed to go eat outside. As soon as the kids were outside, they began demolishing the shack. That day there was shooting, and no-one would have a proper conversation with us because there was a lot of mayhem. They took our food, clothes, TV, fridge, bed — everything, they took it! They even took my fence,” Mtshaolana said.

“Even if a place is a shack, it is what you can afford. No-one can come and tell you that a shack is not important because that is where you lay your head,” said Nomalanga Mzilana*. “We are never confident when it comes to the government, but they are forced by the court to rebuild.”

Mzilana’s shack was the first to be demolished. She describes how young men arrived with the sheriff when her teenage niece was home alone and began throwing food, furniture, plates and cups on to a truck while hurling insults at her niece, who was only able to drag a bed outside. The sheriff’s crew broke Mzilana’s kitchen cupboards.

“Everything was just shattered like this,” Mzilana said, pointing to the debris. “They even stole a pile of bricks next to the shack. So many of our things disappeared that day. They even treated helpless old women like that.”

Almost R4m worth of temporary housing building material has been lying unused on vacant land at the airport in Plettenberg Bay since 2018.
News
1 year ago

Other residents described how the anti-land invasion unit removed their clothing, television sets and fridges. Nobody knows where these goods are being kept.

The chairperson of the area where the demolitions happened, Lulama Gwaza, 52, said the crew was laughing at the residents and swearing while they carried out their work. “We even thought they might be prisoners brought to terrorise us,” she said.

Given the slow pace of housing delivery, Gwaza is displeased that public works has not started rebuilding their homes. “This will be a project because there are 77 structures that the government has to rebuild. The politicians are playing hide-and-seek all the time, and we are tired. Now I don’t think we are going to vote because this government is ours but they are not protecting us. We live like animals.”

Residents have been left with post-traumatic stress after the event, said Gwaza.

“We are afraid if we hear the sound of a bulldozer. Our children run away and cry if they see a police van. Because they saw me fighting with the police that day, they call, ‘Makhulu [Grandmother], you are going to fight with the police now, so please take us back home to our mothers.’”

A five-bedroom brick house Babalwa Mausi, 35, and her sister Yolanda Mausi, 40, were living in with two other siblings was also demolished. Babalwa took out a loan to build the house, which she has to pay back even though it has been reduced to rubble.

Not without a fight

Marie Huchzermeyer from the University of the Witwatersrand’s School of Architecture and Planning said the department was “clearly in contempt of court” for failing to start to rebuild or return illegally confiscated goods.

As the department might apply for an eviction order against the community again, Hartle ruled that though the homes should be rebuilt to the same standard, they also have to be portable, so they can be dismantled, moved and set up again elsewhere. But government’s Upgrading of Informal Settlements Programme sets out the “principle of minimal disruption to peoples lives”, so relocation should always be a last resort, Huchzermeyer said.

“What the households need is security of tenure, now and beyond the state of disaster. Households felt secure enough on this land to construct in brick. No-one stopped them from doing so for a considerable period. They also did so in the absence of affordable options to acquire land formally for this purpose. Any future plans for this land must take this into account,” Huchzermeyer added.

She said it would only be justified to relocate the Airport Park residents if all options for them to remain in the area were “found to be unfeasible. If that is the case, the relocation plan will have to be developed with the affected households. Compensation for their investment is needed.”

The residents, who pooled R500 per family to hire the lawyers who took the public works department to court, said they are prepared to mount another court action. “We are going to take them back to court if they don’t follow the order as the judge has told them to do,” said Simphiwe Fani, chairperson of Airport Park and the neighbouring Bhongweni’s community committee.

*Not her real name.

Stellenbosch municipality has started demolishing shacks at a historic farm-worker village on land it claims is being donated to it by community ...
News
1 year ago

Unique deal is a win-win for landless Thais and mangroves

Mashaba disheartened by derelict factories, including where he started Black Like Me

ActionSA leader Herman Mashaba says an industrial revolution is needed to get South Africans back to work.
Politics
1 year ago