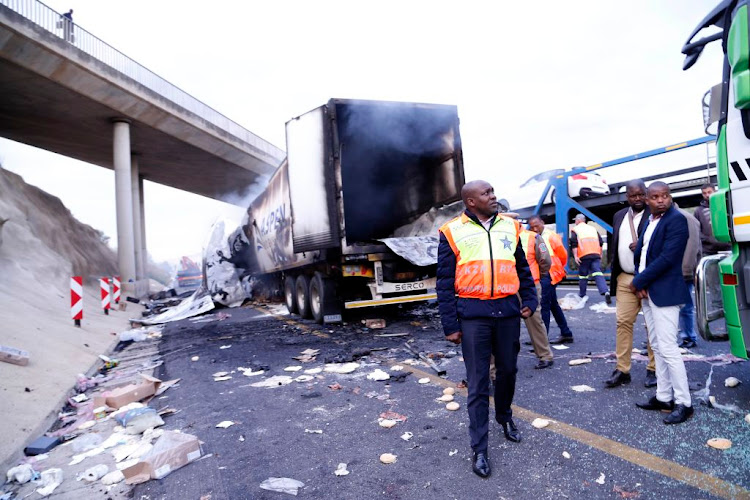 The N3 between Johannesburg and Durban is becoming a dangerous route for truck drivers and transport company owners.
Image: Mbuyiselo Ndlovu

Violent attacks have claimed the life of one person, left two critically injured and seen at least 35 trucks torched in two weeks.

The turmoil stems from a feud between trucking companies and unemployed SA drivers over foreign drivers.

According to the interministerial committee established by President Cyril Ramaphosa and comprising the ministers of home affairs, labour, transport and police, 84 truck attacks have been recorded since April.

On Friday, Cele said 20 arrests had been made after the new wave of attacks, most of which were in Gauteng.

Johan Burger, of the Institute of Security Studies (ISS), said the short-term deployment of troops was warranted given the seriousness of economic, security and diplomatic concerns.

“I am convinced that [this will give] the task team an opportunity to do their work and hopefully they can get to the heart of the problem and make the necessary arrests,” he said.

Lennox Mabaso, spokesperson for the KwaZulu-Natal premier's office, said a series of meetings about the road freight industry began on Friday and continued on Saturday.

“It would be premature to make any announcements before the outcome of Saturday's consultations,” said Mabaso.

This week, hundreds of protesters from the All Truck Drivers Forum and Allied SA (ATDFASA), the SA National Cargo Transport Drivers Association and the National Truck Drivers Federation teamed up with uMkhonto weSizwe Military Veterans (MKMVA) and marched through Durban calling for the removal of foreign drivers and vendors.

ATDFASA distanced itself from acts of violence but general secretary Sifiso Nyathi said many members had lost faith in the forum due to its inability to get the government to act.

“They don't trust us any more because after three years engaging with government and various others in the industry there has been no change,” says Nyathi.

“This issue is long overdue and the drivers are now angry, they decided to take the law into their own hands. While we don't agree with the methods of the torching of trucks and shooting of drivers, we support the plight of SA drivers who want employment.”

He said the forum's decision to protest alongside the MKMVA was not a political move. “MKMVA feel sympathy for the truck drivers. They have their own agenda with the ANC, I don't know what their needs are,” said Nyathi.

“We appreciate their help to force government and employers to comply. Government needs to intervene with the law, our war is with the employers. Some of our members are ANC, some are DA and others are EFF — so we do not carry a cap for any specific party.”

Nyathi said the forum had handed a list of 304 companies that employ foreigners to the National Bargaining Council for the Road Freight and Logistics Industry.

“The issue of the employment of foreign nationals involves amendments to [legislation] which [the bargaining council] has no jurisdiction over. We, however, have been working with the departments of home affairs and employment and labour to assist with aligning [legislation],” said Mchunu.

Thulo Malti, a truck owner and driver, said his truck was one of five torched last Saturday between Sasolburg and Parys.

“They used one truck to blockade the road and we came and stopped there and in less than five minutes I heard noise and my left door opened as bullets were fired,” he said. “I jumped off the truck and ran for my life. The next thing, I saw my truck in flames.”

President Cyril Ramaphosa has spoken out against the carnage on SA's roads as truck drivers and companies have come under attack amid a spate of ...
Politics
1 year ago

Moffat Manyere of the Sadc Crossborder Drivers Association said those responsible for the violence were destroying the economy instead of building it.

“If it's unemployed citizens burning trucks, what are they going to drive after burning down the trucks? Why are they not going to the companies that employ foreigners instead of blocking the N3?” he said.

Road Freight Association CEO Gavin Kelly welcomed Ramaphosa's intervention. “We look forward to the return of calm and stability, that the solutions will be implemented and that every driver can safely perform their tasks wherever and whenever they may find themselves on the road.”

In a statement on Thursday the interministerial task team said the labour matter was complex “as we have truck drivers that are in possession of valid documents and legally in the country, and those that are undocumented and irregular”.

In July eight men, were sentenced to an R8,000 fine or eight months' imprisonment after protest action to prevent trucks entering the port of Durban in 2019. Police said at the time of their arrests the men were wearing ATDFASA regalia.

A truck driver for a company in Gauteng has pleaded for an end to the violence, saying the job is tough at the best of times without fear entering ...
News
1 year ago

If government thinks task teams and rhetoric will end this war, it’s hurtling down the wrong road
News
1 year ago