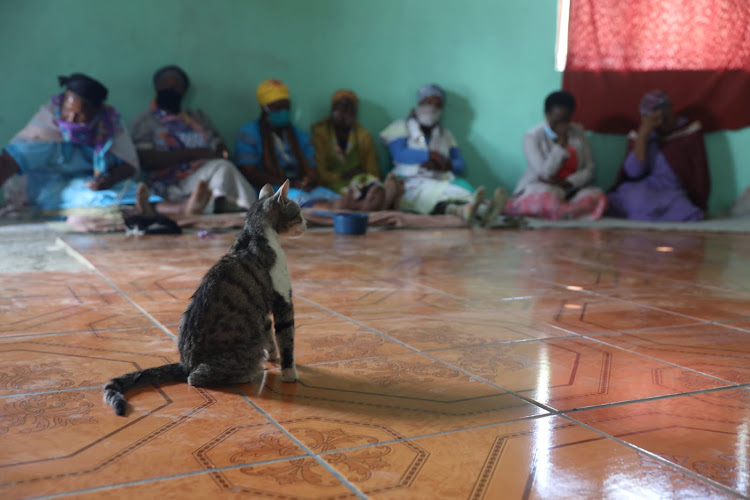 Relatives mourn the gruesome murder of Zazi Nzama, 3, at his family home in Thembalihle, near Estcourt in KZN, on Monday. His grandmother, Theni Majozi, is pictured on the far right.
Image: Sandile Ndlovu

A KwaZulu-Natal family is longing for answers after the murder and mutilation of a three-year-old boy, allegedly at the hands of his father.

Zazi Nzama's mutilated body was found by members of the Majozi family in the community of Thembalihle, near Estcourt, on Saturday.

He had been reported missing a day earlier and was last seen on Thursday.

In a statement on Sunday, KZN social development MEC Nonhlanhla Khoza said a nail was driven through his skull and his eyes and genitals were removed.

The toddler’s father, Themba Majozi, 38, has since been arrested.

The mutilated body of a three-year-old boy was found in Thembalihle in Estcourt, KwaZulu-Natal, on Friday.
News
1 year ago

National Prosecuting Authority provincial spokesperson Natasha Kara confirmed that Majozi had been charged with murder and possession of human tissue.

“The accused appeared in the Estcourt magistrate's court on Monday. The matter was postponed to December 2 for the accused to undergo a preliminary mental observation.”

Speaking to TimesLIVE from their rural village on Monday, Zazi's grandmother Theni Majozi, 57, said she was struggling to come to terms with the gruesome manner in which her grandson's body was found.

She said the boy's mother did not live with the family.

Four people held a family hostage in Barberton, Mpumalanga, on Monday morning, tying them up with items of clothing and robbing them of their ...
News
1 year ago

Three children died on Saturday afternoon after stepping on an illegal power cable at the Jika Joe informal settlement in Pietermaritzburg, ...
News
1 year ago

End this heartbreaking cycle of violence against children

Abused kids can become abusers, and the rate of child murders in SA is double the global average
Opinion & Analysis
1 year ago