PODCAST | The mystery of the Piercey sisters – Coincidence or planned elimination? 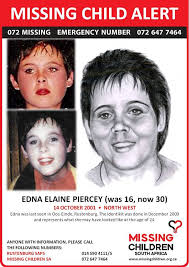 In October 2001, 16-year-old Edna Piercey set out to a friend’s house. She never made it there and disappeared without a trace.

While her desperate family searched for her, they had no idea something far worse was coming.

Lightning was about to strike twice. Not just in the same small town, but within the same family.

Nine months after Edna’s disappearance, her 15-year-old sister Blanche also vanished. Her broken body would be found five weeks later and, suddenly, the investigation had a completely new focus, much closer to home.

In Episode 44, True Crime South Africa explores this two decade-old mystery and asks whether these two events are a horrible coincidence or a targeted plan to eliminate two young girls.

The horrific deaths of Jessica Weyers, Snegugu Linda and a woman whose headless and severely decomposed body washed ashore on Cuttings Beach in ...
News
1 year ago

In episode 43 of 'True Crime South Africa', we delve into this horrific case of truly senseless murder and witness the ripples that continue to move ...
News
1 year ago

PODCAST | Where is Desiree Reid?

At 20 years old, Desiree Reid was navigating the tumultuous waters of early adulthood. Then she vanished without a trace.
News
1 year ago