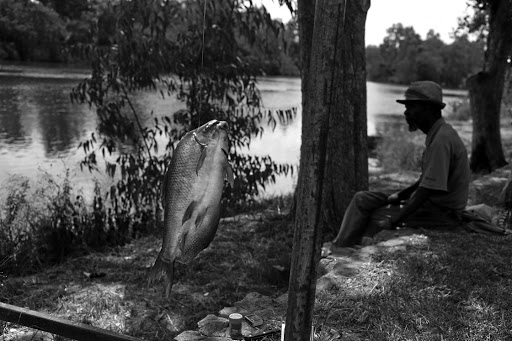 In better days, a fisherman sits along the banks of the Vaal with his prize of the day hanging next to him.
Image: Alon Skuy

The deadline for comment on a report commissioned by the SA Human Rights Commission (SAHRC) on sewage in the Vaal River has come and gone, but there is still no clarity on when the report will be made public.

Since then, there has been no indication of the report’s progress, said Maureen Stewart of environmental pressure group Save The Vaal Environment.

The report had been sent to stakeholders for comment before being submitted to parliament. Save The Vaal, however, was not considered a stakeholder, said Stewart.

“What is in that report that they don’t want made public?” she asked.

Stewart is not alone in her frustration. Residents of Emfuleni municipality have for years had to cope with raw sewage running in the streets and seeping into their homes after its failure to maintain the water treatment plants and keep the pipes in working order.

The municipality, which sprawls along the north bank of the Vaal River near Vereeniging, is one of Gauteng’s most densely populated areas, with Sebokeng, Evaton, Sharpeville and Boipatong townships lying within its boundaries.

In October, the portfolio committee on co-operative governance and traditional affairs (Cogta) said the municipality was dysfunctional and showed no signs of improving in the wake of an investigation that revealed a lack of procurement oversight and failed financial controls.

“It is extremely disheartening to realise that the lives of the people of the area are being affected as a result of lack of both political will and administrative inclination to serve the people,” said committee chair Faith Muthambi.

In 2018, SANDF engineers were deployed as a stopgap measure to unclog the pipes and stem the flow of raw sewage into the river.

Maureen Stewart, vice-chairperson of Save The Vaal River Environment

After a year, they handed over the job to the Erwat — the East Rand Water Care Company — which continued to unblock pipes.

However, Erwat’s contract ended in June this year, before it had a chance to repair the broken wastewater plants. The result has been a deluge of untreated sewage into the Vaal River which is putting the brakes on economic development along the river as well as hammering the local tourism industry, said Stewart.

“The industry is a job creator in a place of high unemployment,” she said. “But no-one wants to come to the river to sit beside a septic tank.”

Between the Vaal Dam and the Barrage, near Parys, the river is now thick with raw sewage as well as chemical pollution from industry around Vereeniging and Vanderbijlpark.

Weekly water samples taken by Rand Water from various points upstream of the Barrage Reservoir have revealed E. coli levels ranging from one part per 100ml to 2.4m parts on the worst-hit section where the heavily polluted Rietspruit flows into Loch Vaal and then the main river itself.

While the worst of the effluent is trapped behind the Vaal Barrage, water quality downstream is sometimes negatively affected.

Veteran whitewater rafting guide Graeme Addison, who runs an adventure tourism company downstream from the Barrage at Parys, said he had been forced to cancel a recent river trip because of polluted water.

“The stench was unbearable,” he said.

The Human Rights Commission did not respond to requests for comment.

One SA Movement leader Mmusi Maimane said the unveiling of foot-operated taps in Eastern Cape was an embarrassment.
News
1 year ago

Dilapidated infrastructure, electricity woes and drought could put the city on the verge of ruin, experts warn
News
1 year ago