Brackenfell High: investigation finds 'no evidence' pupils were excluded from matric bash on basis of race 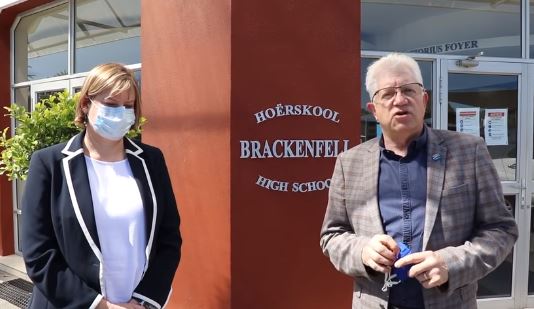 An investigation into a matric farewell event organised for Brackenfell High School pupils has concluded that it was a private function and did not exclude anyone on the basis of race.

Western Cape education MEC Debbie Schäfer said on Monday she had received a report from the provincial department and the facts “corroborate initial reports this was a private function”.

The sequence of events leading to the private function unfolded after the school sent a letter to parents saying the official matric farewell was cancelled. A parent decided to organise a function for her daughter and friends at a wine farm with tickets costing R500.

“The invitation was widely circulated  via WhatsApp groups. The parent asked class representatives to circulate it to their class WhatsApp groups, and the principal has confirmed with that they did so," said Schäfer.

"The invitation was also posted on the organiser’s Facebook page, so was open to people outside Brackenfell High as well. As a result, there were 42 pupils from Brackenfell High and 30 from surrounding schools who attended.”

'When people protest, it must be peaceful': 5 key findings from SAHRC's Brackenfell investigation

The SA Human Rights Commission said the rights of children trump all others and should not be infringed.
News
1 year ago

Allegations were also made that the head girl did not attend “because no pupils of colour were attending”.

According to the report, the head girl and head boy were invited, "but did not attend as they had other plans on that day and were organising their own farewell functions".

"Four teachers were invited in their personal capacities as they had close personal links to the organising parent. The school was aware the event was happening, but the school and the organisers regarded it as a private event."

Schäfer said: “The evidence is thus that invitations were circulated to all matric classes.  There is no evidence people were excluded based on their race. There are also no grounds to take action against teachers who attended the private event.”

However, she said the incident had highlighted other incidents of racial tensions which the school acknowledged. The school had and will take steps to address this, including:

“In addition to this, the district will also arrange diversity workshops facilitated by the Institute for Justice and Reconciliation for all the staff at the school,” said Schäfer.

IN PICS | Brackenfell braces as EFF threatens to descend on ‘racism’