A forklift, sanitisers and strong winds: What we know about KZN factory blaze, according to fire chief 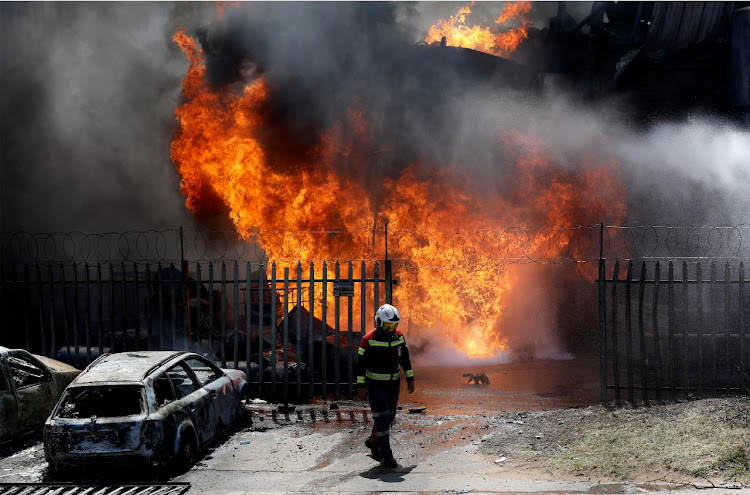 Firefighters battle a blaze at a chemical factory in New Germany, west of Durban, after an explosion on Tuesday.
Image: Sandile Ndlovu

Just after 11am on Tuesday, emergency services in New Germany, Pinetown, received multiple calls about an explosion at a chemical factory.

Multiple emergency services were dispatched to the area in effort to extinguish the destructive blaze in which at least 13 people were injured, Zeta Labs manager Nikesh Singh told TimesLIVE.

Dennis Govender, the eThekwini fire department's divisional commander for the western region, said an investigation was under way.

“We made attempts to extinguish the fire, but we couldn’t, purely because there was no water in the facility and surrounding areas. We had limited water in the tanks that we carried,” Govender said.

More emergency services were deployed to combat the water shortage

At least thirteen people have been injured due to a massive explosion at a chemical factory in New Germany, Durban on December 8 2020. Investigations into the cause of the fire are ongoing.

At least 13 people were injured due to a massive explosion at a chemical factory on Otto Volek Road in New Germany, west of Durban, on Tuesday
News
1 year ago

The chemical manufacturing company was engulfed in flames as highly flammable substances, combined with heavy winds, made it a nightmare for firefighters to battle the blaze.

“The product we were dealing with was mainly sanitiser, which was 70% alcohol. We had petroleum jelly, acetone and various other chemical products in the facility.

“The wind was a contributing factor. We managed to extinguish the fire about 4pm,” he said.

About 115 employees were on site when the fire started. At least 13 people were hospitalised, seven who had suffered injuries while the rest had smoke inhalation.

He said they suspect the fire was started by a product that was recently delivered.

“Some product was delivered and it was suspected to have been leaking. It was transported with a forklift, and the fire started at the forklift. I'm not sure if the fire was started by the forklift.

“There’s a rumour that there was industrial action that started it, but to our knowledge the fire started at the forklift. I don’t want to speculate as it is under investigation,” he added.

When thunder roars, go indoors: beware the bolts of fire from the sky that kill us

SA has one of the world’s highest death rates from lightning strikes. At top SA experts tells us how to be safe
News
1 year ago

Ready, set, party for matrics at Rage festival, and Covid be damned

This year’s pilgrimage has all the makings of a superspreader event, but youngsters are unfazed
News
1 year ago