Bystander critically injured after being shot in the face 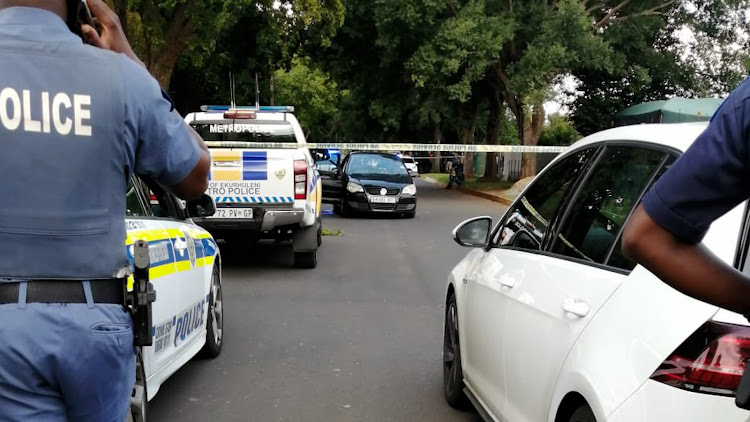 The end of the road for two suspects who were shot dead in a black VW Polo during the car chase.
Image: REZA/Twitter

Five people lay dead — three of them security officers — after a brazen ambush followed by a dramatic car chase and exchange of gunfire through the streets of Benoni on the East Rand in Gauteng.

CCTV cameras captured part of the chase as a convoy of police and security company vehicles pursued suspects in a black VW Polo on Tuesday.

More than 60 gunshots can be heard during the brief clip.

The driver of the bakkie, with “VIP Protection” branding on its doors, was injured and taken to hospital.

A manhunt was launched for the shooters who were travelling in two VW Polos and a Mercedes-Benz.

Police and Ekurhuleni metro police responded and a high-speed chase unfolded through the streets. 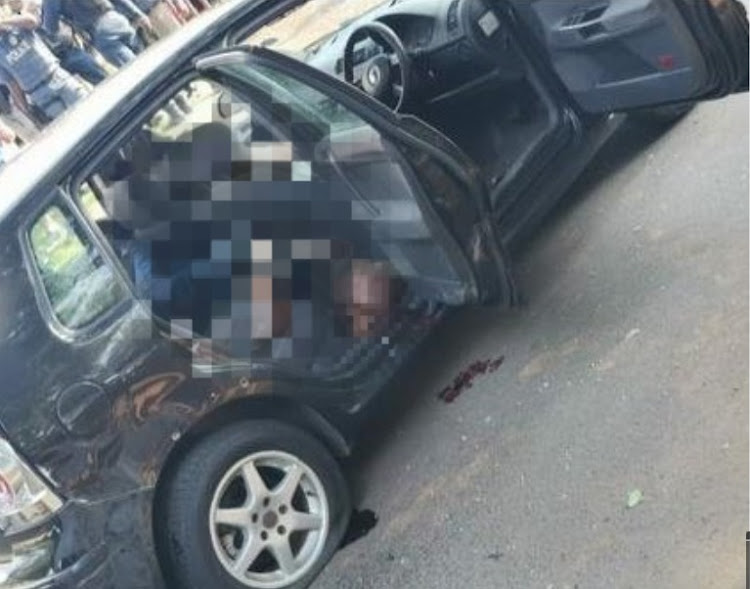 The black Polo after it was brought to a halt.
Image: East Rand Traffic/Twitter

Makhubele said after an exchange of gunfire, three suspects were cornered in Beech Street, Northmead Extension 4.

Two were shot dead while a third, the driver of the black Polo, was wounded and taken to hospital under police guard.

ER24 spokesperson Ross Campbell said paramedics arrived at the initial scene to find a “security bakkie riddled with bullet holes which had been driven off the road at the intersection”.

“Three male security guards were found in the bakkie having suffered fatal gunshot wounds - they were declared dead on arrival. A fourth security guard, a 35-year-old male, had run into a nearby shop - he was found to have suffered gunshot wounds to the back and stomach and was in a critical condition.”

He was treated and transported to hospital.

“A male bystander of unknown age was also found to have suffered a gunshot wound to the face and was in a critical condition. He too was treated with advanced life support interventions and transported to a hospital for further care.”

At the second scene, on the corner of Beech and Kanna Streets in Benoni, two males suffered fatal gunshot wounds in the Polo.

“The motive for the shooting is yet to be determined,” added Makhubele.

A detective sergeant and a police administration clerk were arrested after a failed heist that ended in a hail of bullets in Bryanston, Johannesburg, ...
News
1 year ago

Two dead, one critical after car sprayed with bullets in Joburg

Two people were shot dead and another critically injured when a car was riddled with bullets on the Xavier Street off ramp near the M1 highway in ...
News
1 year ago

Cape Town traffic police have apprehended one person with a firearm after multiple people were shot at the station deck taxi rank on Monday.
News
1 year ago