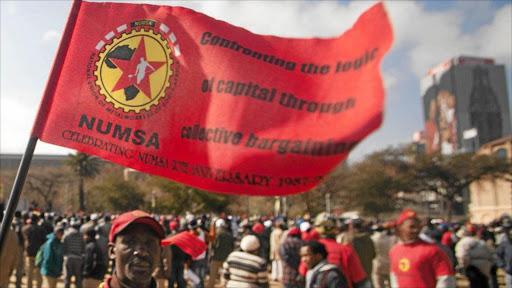 The Supreme Court of Appeal has rebuked a KwaZulu-Natal judge for taking four years to deliver a judgment in a matter in which a company claimed damages against Numsa.
Image: NUMSA

The Supreme Court of Appeal has lambasted a KwaZulu-Natal judge for taking four years to deliver a judgment involving a civil claim for damages emanating from a strike.

In the ruling, penned by acting judge Glenn Goosen (with four judges concurring), the court says this was “an unconscionable dereliction of duty”.

The matter before the SCA was an appeal by the National Union of Metalworkers of SA (Numsa) against a ruling by judge Anton Van Zyl in the Pietermaritzburg High Court in favour of Dunlop Mixing and Technical Services.

The company had claimed for “riot” damages, through the Gatherings Act, arising from a protected strike which had turned violent.

The SCA overturned his ruling, saying the act did not apply because the industrial action was a picket “in furtherance of a protected strike” authorised under the Labour Relations Act, which gives immunity from civil claims.

Towards the end of the judgment, the court notes the four-year delay and says: “The judgment (of Van Zyl) gives no explanation for this extraordinary delay.

“We were informed by counsel that whereas the underlying labour dispute had long since been resolved, the consequences, in the form of civil litigation (for damages), are self-evidently not.

“The prejudice caused by a delay of four years is manifest. How it can take the judge four years to decide this issue and to deliver his judgment defies understanding.”

The judges said if there was a reasonable explanation or excuse Van Zyl should have set it out in his judgment.

“It is, after all, on the basis of judgments delivered by judges that they are held accountable for the administration of justice under their auspices. The absence of an explanation suggests there is none. A four-year delay constitutes an unconscionable dereliction of duty ... It is a matter which ought to enjoy the consideration of the judge president of the division concerned.”

MPs are so concerned about the declining performance of the department of justice that they want the Public Service Commission (PSC) to assist the ...
Politics
1 year ago

At the beginning of the term there were 607 judgments reserved, with 525 for less than six months and the balance, 82, for longer.

KZN judge president Achmat Jappie said he had not seen the SCA judgment, but he was aware that Van Zyl had a number of long-outstanding judgments. He said the issue had been referred to the Judicial Services Commission.

“He is not the only judge in this division who has outstanding judgments, but he is the worst. And it seems he is unenthusiastic about catching up.”

Jappie said he believed the Covid pandemic might have played a part in delays in all judicial enquiries of this nature.

The spokesperson for the office of the chief justice, Nathi Mncube, did not respond to a request for comment.

In a ground-breaking judgment on parenthood, the high court in Gauteng has ruled that the grandmother, not the father, should benefit from the estate ...
News
1 year ago

Average time for judgment takes over six months now compared to less than four months in 2017.
News
1 year ago

With this new memoir, Justice Moseneke hopes to spark conversations about the state of the SA judiciary
Books
1 year ago