Puppets bring together a town divided by apartheid 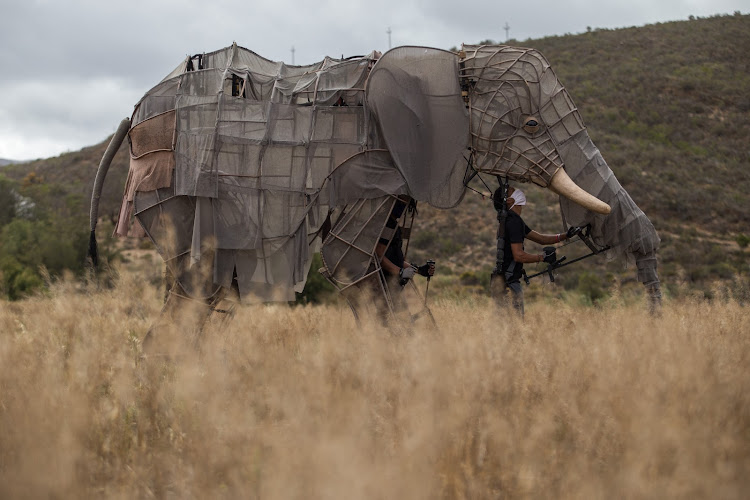 Barrydale will celebrate ten years of puppetry with ‘Reboot Eden’, four short films with nature themes, and our human connection with it.
Image: GroundUp/Ashraf Hendricks

For 10 years, giant puppets in the shape of animals, insects and futuristic robots have performed and danced down the streets of Barrydale.

The annual puppet parade, started in 2010 by the Handspring Puppet Trust, aims to bring together the residents of this small Klein Karoo town which was divided by apartheid. But this year, Covid-19 has chased the parade off the streets and onto screens instead.

Starting on Reconciliation Day, the Reboot Eden event will celebrate 10 years of puppetry with four short films about nature and the human connection to it. The films are a collaboration between the Centre for Humanities Research at the University of Western Cape (UWC), Net Vir Pret, the Handspring Puppet Company and the uKwanda Puppetry and Design Collective.

The four films — Booi’s Soul Searching Adventures, Die Voetpad van die Vrou, Mnumzaan and Protect the Redfin — star puppets from the previous shows. The event will also mark the launch of the album Celebration: 10 Years of the Barrydale Puppet Parade with the music that has brought these performances to life.

Each year, said Aja Marneweck, project director of the Barrydale Puppet Parade and fellow at UWC’s Centre for Humanities Research, the parade would move through the town ending with a final performance at the school on the hill which separates “white” from “black” Barrydale. In 2019 the parade The Final Spring focused on climate change. 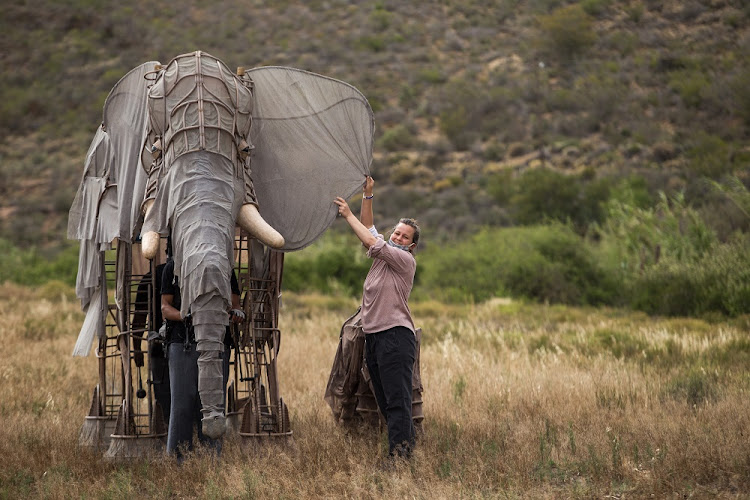 Mnumzaan was filmed at Rooikamp (Red Camp), a site from which families were forcibly removed during apartheid. “It’s a site of pain, it’s a site of remembrance and it’s a site that requires healing” she said. The idea is to use “puppetry to bring awareness to those spaces,” said Marneweck.

The whole Reboot Eden event is about nature recovering, said Marneweck. “Reboot the land, the paradise that was this area before humans came.

“This needed to have nothing to do with Covid. This had to be about hope. And the thing that would bring the most hope is this revival of nature.” 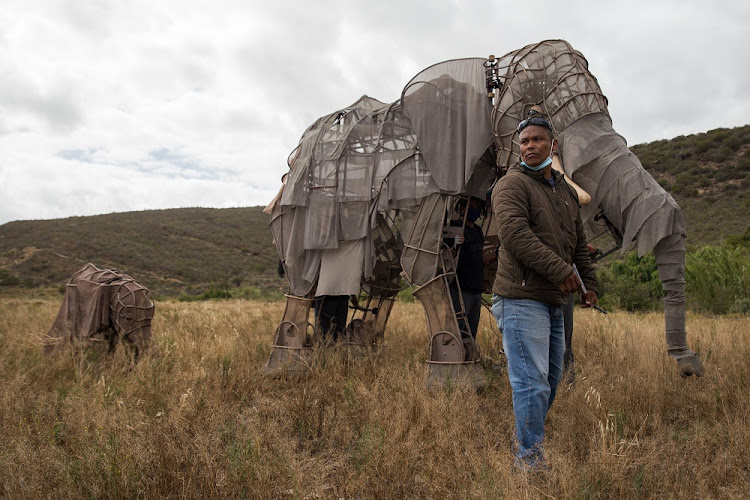 It’s hard work to make the elephant move and breathe, says Angelo Endley who worked the head of the life-size elephant puppet in 2016.
Image: GroundUp/Ashraf Hendricks

Angelo Endley is the director of Mnumzaan and youth and sports co-ordinator at Net Vir Pret, a non-profit company which focuses on youth in the Overberg region. Inspired by 2016’s show Oliphantland, in which he was head puppeteer, Mnumzaan has no dialogue. He said it was easy enough to write — “I just wanted to let the animals be animals” — but hard to film. There were only seven days to rehearse and some of the puppeteers were inexperienced.

“You know what the year has been like. It has been difficult for everybody” he said. Reboot Eden means looking back, starting over and learning from those past experiences. “For me it means Stop, Think, Restart.” 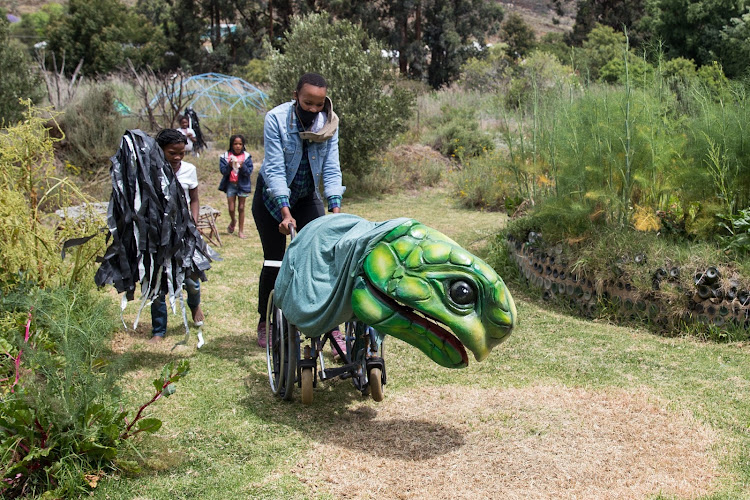 Siphokazi Mpofu of the uKwanda Puppetry and Design Collective said Covid-19 had helped the group come up with new ideas. Mpofu was the puppetry director on Die Voetpad van die Vrou, and trained the local puppeteers. It was hard but “they were so focused”, she said. “Puppets need to move and need to breathe.” One of the hardest things is getting the eye line right, as the head of the puppet is not in the same place as the head of the puppeteer.

Mpofu said she liked the idea of multiple productions and would like to do the same thing in 2021. “When people come to town to see the Barrydale parade, they can go to different sides of the town, to see different work, rather than sitting in one space.”

UKwanda’s Sipho Ngxola, who co-directed the film Mnumzaan and was one of the puppeteers in the life-size elephant in the film, said he had found the process difficult. Everything has changed and performing for the camera is very different from performing to a live audience and feeding off the audience’s energy, he said. “It’s very quiet. You feel very lonely.” 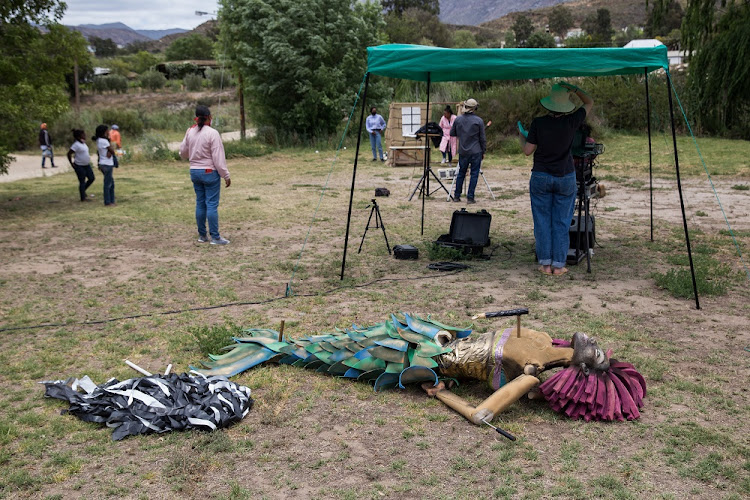 A mermaid puppet lies on the floor during the filming of Die Voetpad van die Vrou.
Image: GroundUp/Ashraf Hendricks

Die Voetpad van die Vrou follows a young woman who leaves to complete her studies, and on returning, finds that things have changed. The story is inspired by a real life tragedy after a young girl from Net Vir Pret was murdered during lockdown this year.

“Through storytelling, we’ve really found our magic,” said Donna Kouter, an employee at Net Vir Pret and assistant director of Die Voetpad van die Vrou. She said that all the stories came from the people. “It’s our voice.”

The parade: a symbol of reconciliation

“As in every town in SA, there are two communities.” said Kouter, who grew up in Barrydale and whose grandmother was forcibly removed. She said at first everyone lived together on one side of the town but during the apartheid removals, “the coloured people were chucked behind the hill”.

“They called that part, Steek My Weg [hide me away]”.

Today, the town is still separated. “They call it Smitsville, but we don’t like that name because it is an old apartheid name. We say Lower Barrydale and Upper Barrydale,” said Kouter. 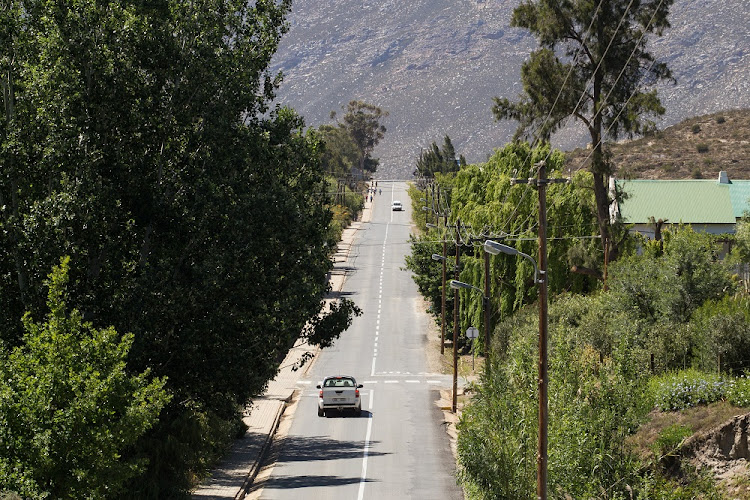 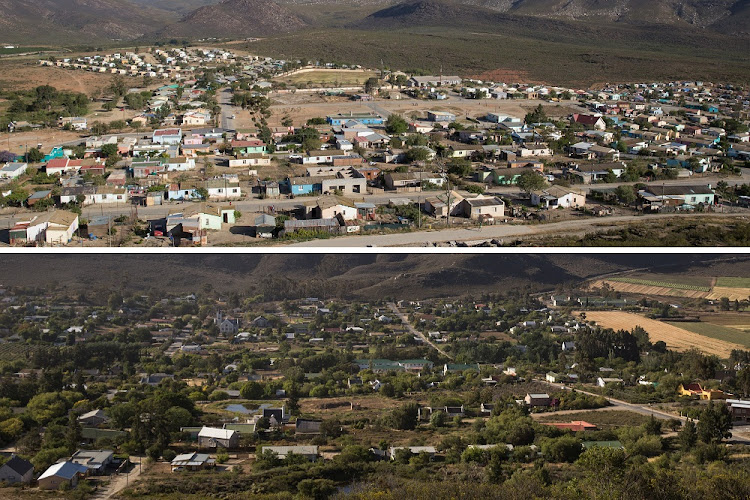 The two sides of Barrydale. During apartheid, the Group Areas Act removed black people from the lower side making it a ‘whites only’ area. Donna Kouter a Barrydale resident said, “The coloured people were chucked behind the hill”. “They called that part, Steek My Weg [hide me away]”.
Image: GroundUp/Ashraf Hendricks

As a child, said Kouter, she had not been allowed to play in the river because it was on “the other side” of the town. So she had not known about the Barrydale Redfin, the small endangered fish found only here, which is the star of the puppet show Protect the Redfin. “We never knew, because we weren’t allowed to come and play in the river.” 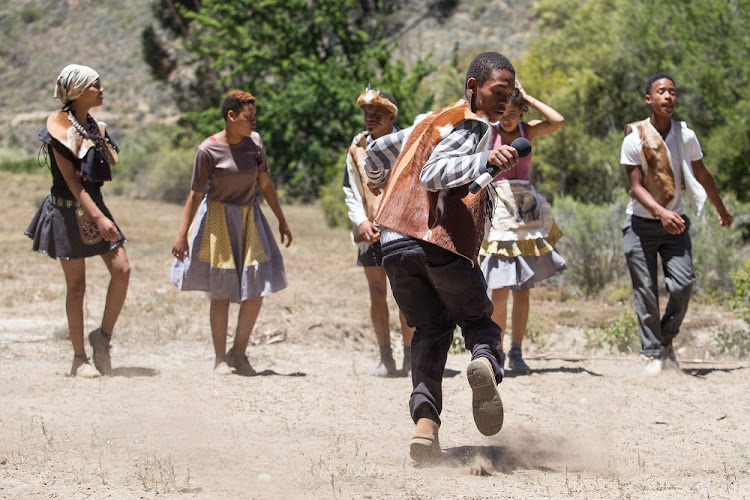 Performers do a traditional reed dance during the filming of Booi’s Soul Searching Adventures. Inspired by the 2014 production Kagg’agn Dreams the story follows a young boy and his rediscovery of his roots within Hessequa heritage.
Image: GroundUp/Ashraf Hendricks

“The parade really helped to bring the two sides together,” said Kouter. “And it was in a neutral space, which is the school. The middle of the community.” She said everyone would come together for that one night.

During the rehearsals something used to happen in the town and everyone used to take notice, she said. “The parade is like a symbol of community building. A symbol of coming together. A symbol of reconciliation”. 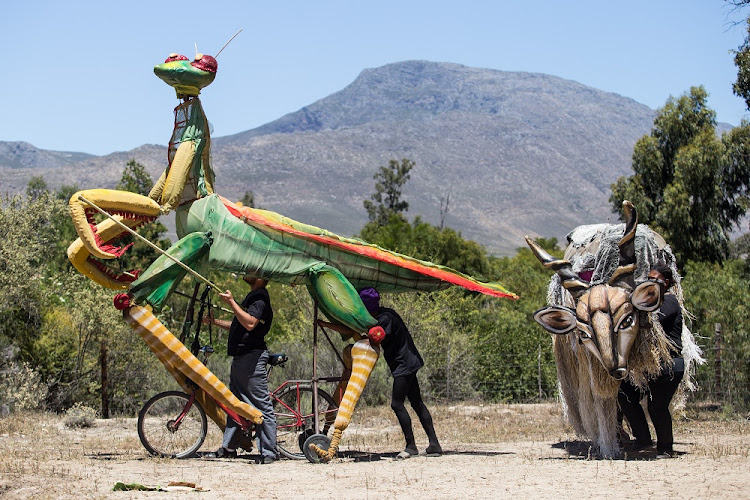 President Cyril Ramaphosa has admitted that racial tensions that flared up in parts of the country continued to open old wounds and also showed that ...
Politics
1 year ago

President Ramaphosa has urged South Africans to learn more languages as part of bridging racial divides in the country.
Politics
1 year ago

“Little Amal”, a 3.5m giant puppet representing an eight-year-old Syrian refugee, will embark on an epic 8,000km journey across Europe next year to ...
News
1 year ago