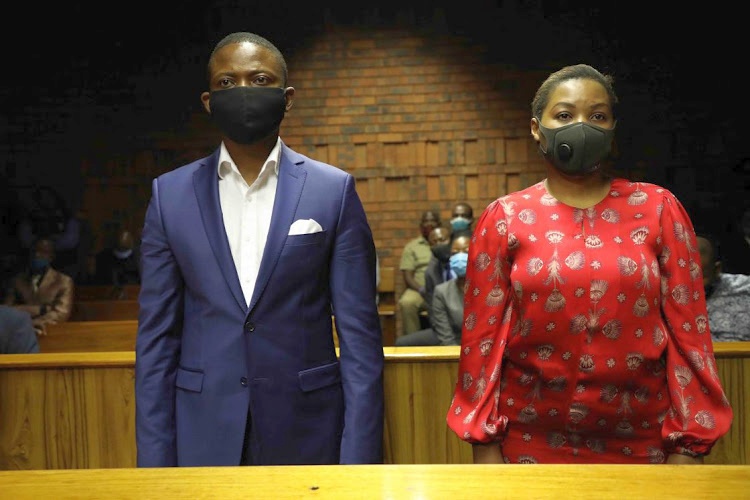 Willah Mudolo, one of the accused in a R100m case involving self-proclaimed Malawian prophet Shepherd Bushiri, will remain in custody after being denied bail on Tuesday.

Mudolo, who runs an investment firm and a property development company, appeared at the Pretoria magistrate's court alongside his wife Zethu and Landiwe Ntlokwana for the verdict on his bail application. His wife and Ntlokwana are out on bail of R100,000 and R20,000 respectively.

The trio, together with Bushiri and his wife Mary, are facing charges of fraud, theft and money laundering involving more than R100m relating to an alleged investment scheme through a company owned by Mudolo and his wife.

Magistrate Thandi Theledi said the conduct of Bushiri and his wife Mary, who skipped bail and fled to Malawi, played no role in the bail decision of Mudolo.

“The court finds that the applicant has failed to convince the court that the interstate of justice permits his release on bail, therefore bail is denied,” she said.

The extradition of the couple has been long-awaited since they flouted their bail conditions and escaped to their home country under mysterious ...
News
1 year ago

Theledi said she was disturbed by allegations that Mudolo was able to communicate with people while in custody.

“While in custody he was still able to communicate with people outside in order to see what he can do, I am also deeply affected by this that he did so in an [alleged] attempt to try to bribe some of the court officials,” she said.

Mudolo, who is a Zambian national, previously told the court he was innocent of any wrongdoing.

“I intend to plead not guilty and will provide evidence to the state that any and all funds paid into the business account of Rising Estates (Pty) Ltd, without my knowledge but on instructions of Mr Shepherd Bushiri, were repaid to the nominated account of Mr Shepherd Bushiri and various beneficiaries,” he said in an affidavit during his bail application.

In his bail bid, Mudolo's legal representative, advocate JP Marais, argued that there was no evidence his client would be any danger to any member of society if released on bail.

“He has left SA on numerous occasions and has returned every time. He has only one wife and two children. He is not going to run away and abandon them,” he said.

Just because Bushiri fled doesn't mean I will, says co-accused in bid for bail

Willah Mudolo, one of the accused in a R100m case involving self-proclaimed Malawian prophet Shepherd Bushiri, will know in a week whether he will be ...
News
1 year ago

However, the court also heard how Mudolo tried to flee the country on three separate occasions, allegedly using different passports.

The state argued there was a likelihood that, if given bail, Mudolo could also flee the country like the Bushiris.

Mudolo's legal representative disputed this, saying Mudolo’s application should be dealt with separately.

“The fact that Bushiri and his wife, with the assistance of some corrupt officers, managed to exit SA in some illegal way should not influence this court. It has nothing to do with accused number one,” he said.

The investigating officer, of the Hawks' specific organised crime unit, told the court Mudolo was in possession of three cellphones while he was detained at the Kgosi Mampuru Correctional Centre. The cellphones were later confiscated.

Mudolo will remain in custody and the case has been postponed to February.

If the testimony by investigating officer Lt-Col Daniel Marais is anything to go by, there will be more arrests in the case involving fugitive couple ...
News
1 year ago