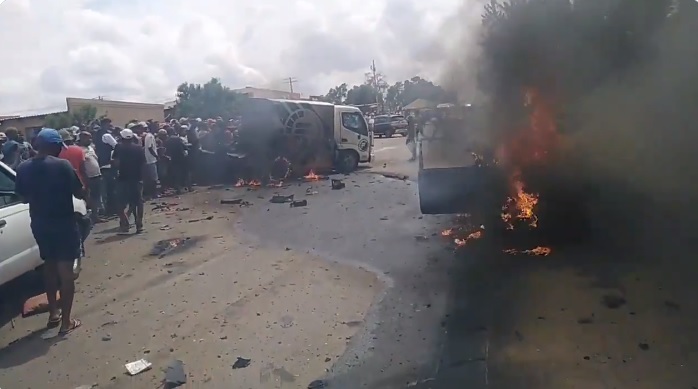 Police said the gang made two attempts to blow up the van and fled the scene empty-handed.
Image: Screengrab of video

A Fidelity security guard and a bystander were shot and wounded during a foiled cash-in-transit heist in Evaton, near Sebokeng, south of Johannesburg, on Monday.

National police spokesperson Col Athlenda Mathe said the cash van was ambushed as it was about to load money from a ATM bank in the area.

“The security guard noticed a suspicious vehicle attempting to block the cash van. A chase ensued and the unknown men started firing at the cash van, which came to a standstill.

“The crew was forced out of the van and the driver was shot in the right hand,” Mathe said.

She said a bystander was also wounded during the incident.

Mathe said the gang had made two attempts to blow up the van and fled the scene empty-handed.

Police recovered two vehicles — a Toyota Camry and a Mazda that was burnt to ashes.

Officers also recovered a rifle and pistol cartridges from the scene.

In a separate incident in Mitchells Plain in Cape Town on the same day, a SBV security guard was left in a critical condition after being shot during a foiled heist.

Mathe said it was alleged that the SBV crew was accosted by a group of men after loading cash into the van at Colorado shopping centre.

“A scuffle ensued and one of the security officials was shot and wounded. With the assistance of the community, three of the suspects were arrested at the scene and handed over to the police,” she said.

Police recovered a 9mm pistol with nine rounds of ammunition.

“Police would like to pay gratitude to the community who played their part in assisting the SAPS in ensuring that a citizen’s arrest was effected.”

Police in northern KwaZulu-Natal are on the hunt for five men who were involved in a cash-in-transit heist in Mtunzini shortly after midday on ...
News
1 year ago

Gauteng police have arrested a man linked to a foiled cash-in-transit heist in Dobsonville, Soweto, on Monday morning
News
1 year ago