Taxi driver beats up, spits in face of 'drunk policeman' in Cape Town 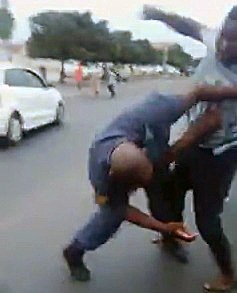 A still image from a recording of the fight between a police constable and a taxi driver.
Image: Screengrab

A 33-year-old police constable was arrested for allegedly driving under the influence of alcohol and reckless and negligent driving after being filmed fighting with a minibus taxi driver in Cape Town.

“The SAPS management in the Western Cape has learnt with shock of videos and/or recordings doing the rounds on social media platforms of a police official involved in a motor vehicle accident and a fight with a taxi driver in Khayelitsha,” said Brig Novela Potelwa.

In the video, the uniformed policeman gets out of a marked van, approaches the minibus and throws a punch at the driver. A fist fight ensues and the constable is knocked to the ground and pinned down. The taxi driver spits on the policeman's face while delivering more blows.

Witnesses can be heard cheering the driver as he throws punches.

Potelwa said when the police arrived at the scene they found two vehicles with damage  and a policeman who appeared unsteady on his feet.

“The Lingelethu West police officials took him for testing. He was subsequently charged for driving under the influence of alcohol as well as reckless and negligent driving. He is a 33-year-old constable attached to Khayelitsha Site B police station in the crime prevention unit. An internal disciplinary investigation has since been instituted,” Potelwa said.

The identity of the taxi driver is known and he will be interviewed as part of the investigation.

“Police officials are reminded to uphold the name of the SAPS at all times in the manner in which they carry themselves,” said Potelwa.

'Not all officers are like this, but your silence will affect you': Mashaba on drunk cop video

The police officer could barely talk or stand while a man held him up to show him the damage to the vehicle.
Politics
1 year ago

Four Gauteng holidaymakers are expected to appear in the Ramsgate magistrate's court on Thursday after a brawl with lifesavers at Manaba beach on the ...
News
1 year ago