Four Gauteng holidaymakers are expected to appear in the Ramsgate magistrate's court on Thursday after a brawl with lifesavers at Manaba beach on the KwaZulu-Natal south coast.

Provincial police spokesperson Capt Nqobile Gwala said a case of assault with intent to cause grievous bodily harm was being investigated by Margate SAPS.

“It is alleged [on Wednesday] at 2.24pm, at Manaba Beach, a group of suspects assaulted the lifeguards who were on duty. Four sustained injuries and one was seriously injured and taken to hospital for medical attention,” said Gwala.

“Four suspects between the ages of 21 to 52 were placed under arrest. They are appearing before the Ramsgate magistrate's court.” 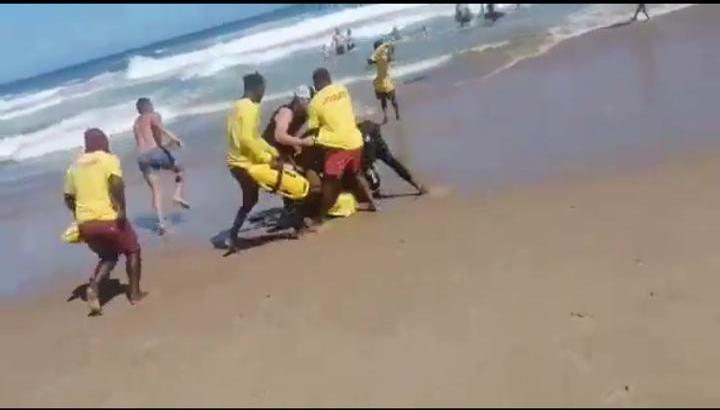 Lifeguards and a group of men believed to be from Gauteng were embroiled in a fight on a KwaZulu-Natal south coast beach on Wednesday.
Image: Supplied

Ray Nkonyeni municipality spokesperson Simon April said there was a scuffle after a group of men allegedly refused to listen to lifeguards.

“It started off as a scuffle when the lifeguards tried to warn the group about how far they could swim. Things got heated and unfortunately it became a physical fight on racial grounds.

“There were punches and kicks and lots of racial abuse and swearing, all because it seems that the lifeguards were trying to do their job and enforce the rules.”

April said the men then came out of the water and the fight continued near the office and change rooms, where one lifeguard was injured.

“The group then jumped into their bakkie while the reservists were trying to detain them and call the police. It was a Gauteng registration. A case of public violence has been opened.

“We welcome visitors to our municipality because we value their business, but this is a case where the rules were violated. We would have hoped that at this time in our country with the pandemic, we respect each other and can adhere to the precautionary measures in place, but it was not to be,” he said.

In the video, dozens of people can be seen frolicking in the sea when the fight breaks out. A number of angry visitors shout at the holidaymakers who are involved in the brawl.

One person is heard telling the men that these are lifeguards who are there to protect people from drowning and that they are “doing their job” so should not be attacked.

The government's beach bans in the Eastern Cape are not irrational, says high court judge Hans Fabricius, who on Wednesday dismissed three ...
News
10 months ago

Kouga municipality mayor Horatio Hendricks has warned residents and visitors, until the outcome of a court challenge, not to set foot on a 60km ...
News
10 months ago