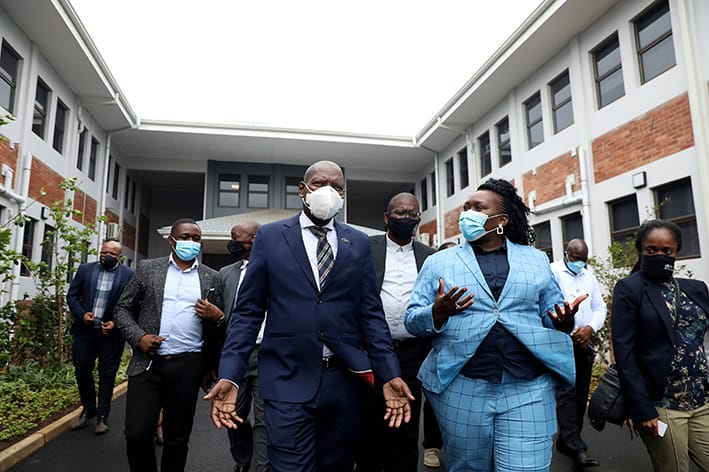 At least 34% of hospital beds remain unoccupied in KwaZulu-Natal as the province continues to battle against the second surge in Covid-19 infections.

These figures were revealed by health MEC Nomagugu Simelane-Zulu during a digital briefing on Wednesday.

Simelane-Zulu said while the bed occupancy rate varied across districts, places such as Ugu, uMgungundlovu and eThekwini - areas identified as hotspots by President Cyril Ramaphosa on Monday - were taking strain. 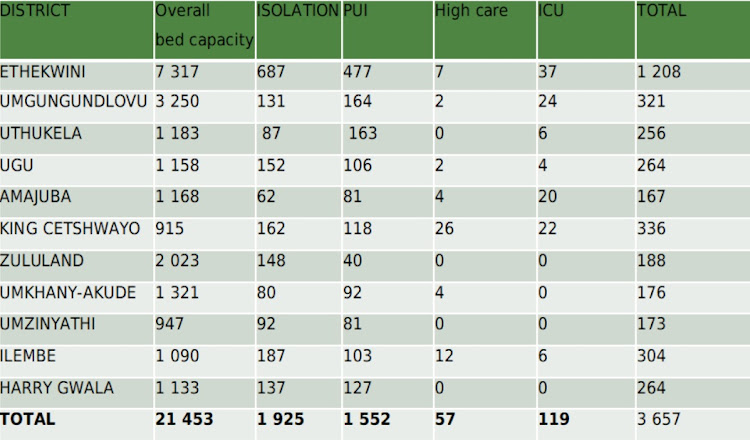 She said as of Monday, the overall beds for isolation and patients under investigation (PUIs) was 3,477.

"Of these beds, 2,289 were occupied, which amounts to a 66% bed occupancy rate. These variations in  bed occupancy rates among districts mean the province has 34% of beds that are unoccupied. This allows for intra–district transfer of Covid-19 patients where there is pressure, should the need arise.

She said districts such as Umzinyathi, Harry Gwala, Amajuba, Zululand, and uMkhanyakude have a very low bed occupancy.

"For instance, patients in Ugu district can easily be transferred to Harry Gwala district, uMgungundlovu patients to uThukela district, and so on. We are confident bed occupancy will become a lot more stable, thanks to the reintroduction of level 3 regulations."

Over the past 24 hours, the province registered 2,835 new infections and recorded 144 deaths related to Covid-19.

Simelane-Zulu appealed to the public to stop spreading rumours regarding the province's inability to admit patients because of a shortage of beds. 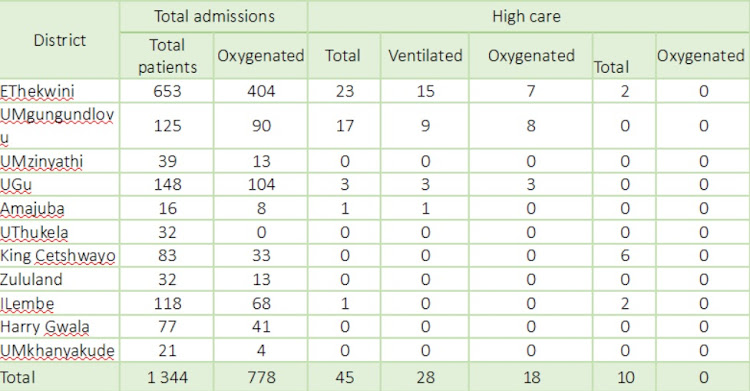 She said there has been high demand for beds in recent weeks, mainly caused by late presentation, which means by the time patients went to hospital, they were already presenting with complications and required high or intensive care.

"There are districts that aren’t regarded as hotspots which have low bed occupancy. Our plan is to ensure that if one district runs out of beds, patients will be moved to where there is space. All the hotspot districts have field hospitals that have been created over and above the normal beds."

She said the province had 954 beds in its five field hospitals, adding that a further 43 beds have been made available for Covid-19 patients at 22 of the province's community health centres (CHCs). 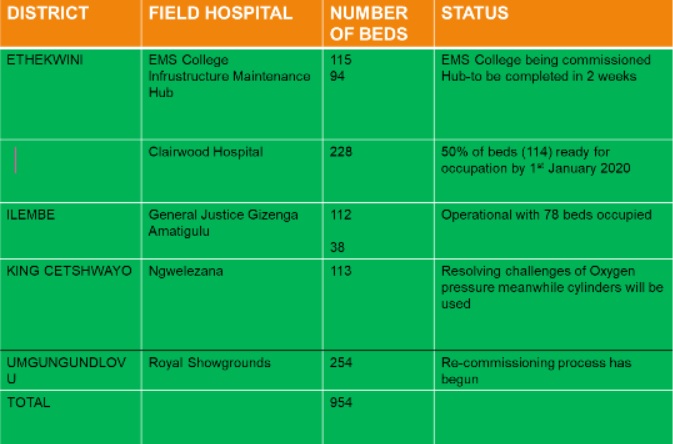 The current capacity of the five field hospitals in the province.
Image: KZN department of health

"These beds will be used to accommodate sick patients while waiting for transfer to the nearest hospital. To cope with this responsibility, CHCs have been provided with special equipment like continuous positive airway pressure (CPAP) machines, high-flow nasal oxygen and rapid tests."

The MEC said as of last week almost all districts had rolled out the antigen rapid test at hospitals and CHCs.

"The aim of the rapid test, which produces a Covid-19 result in 15 minutes, is to ensure immediate diagnosis of patients with Covid-19 so they can be separated and isolated. It also means demand for beds will be reduced because statistics will show you most of our beds are occupied by PUIs."

She urged people to stop sowing panic and fear.

"Certain individuals have made false claims that the province has run out of bed space and that mortuaries are full, due to Covid-19. Now is the time for us to band together and strive to use powerful tools such as social media positively, and to spread factual information that empowers citizens instead of creating and perpetuating fear because no-one benefits from that," she said.

'Some of us will die, but those left behind should continue the fight': doctor

Your chances of survival when arriving at hospital will decide whether you are admitted to ICU or receive oxygen.
News
8 months ago

WATCH | ‘We don’t want to see you on the streets’: Police clamp down under level 3

There are no hospital beds for Covid-19 patients in certain areas of KwaZulu-Natal and not enough oxygen to keep critical patients stable.
News
8 months ago