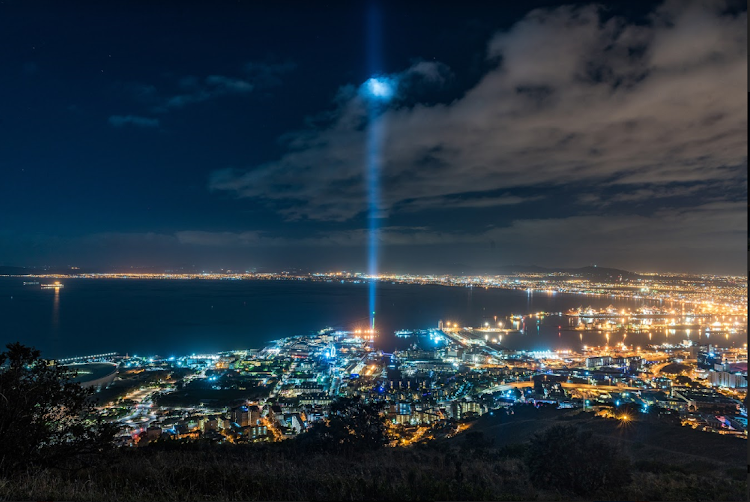 A beam, made up of 36 vertical searchlights, forms part of the Waterfront's Tribute of Light symbolising the lives that were lost, the jobs that were affected, the coming together of a nation in solidarity and ultimately for hope in the new year amid the Covid-19 pandemic.
Image: Supplied

A beam that will light up for an hour nightly at 9pm for the first six days of the new year — this is how the V&A Waterfront in Cape Town hopes to bring some light and inspiration after the hardship that was 2020.

“In light of a year that has been filled with uncertainty and fear, the V&A Waterfront will ... shine a beam of hope from the precinct which, on a clear night, will be visible throughout the city and suburbs that have a view of the city bowl,” it said in a statement.

The beam, which consists of 36 vertical searchlights, forms part of the Waterfront’s Tribute of Light symbolising the lives that were lost, the jobs that were affected, the coming together of a nation in solidarity and ultimately for hope in the new year.

“We are using the symbolic warmth of light to draw us to a moment to connect, even though we are physically apart, and hope everyone who sees it takes the time to contemplate on themes of compassion, solidarity, connection, inspiration, and collaborations we have been able to demonstrate and experience during a very uncertain period.”

Waterfront CEO David Green, said this New Year’s Eve marked the first time in the V&A Waterfront’s 30-year history, that there were no crowds converging for the traditional countdown to a fireworks display at midnight to usher in the New Year.

According to the statement, Covid-19 management protocols remain in place throughout the festive period with the wearing of masks mandatory. In August this year, the Waterfront became the first attraction in SA to adopt the World Travel and Tourism Council’s Safe Travels stamp protocols.

PODCAST | Can tech help save small hotels and guesthouses?

President Cyril Ramaphosa will light a candle on New Year's Eve to commemorate the South Africans who have lost their lives to Covid-19.
News
1 year ago

From lockdown to hotspot: 10 words Covid-19 taught us this year

These are some of the new terms we learnt during the pandemic.
News
1 year ago

It was like a new year scene we have never experienced before as the usually packed East London beaches were deserted on  New Year's Day. Traffic ...
News
1 year ago