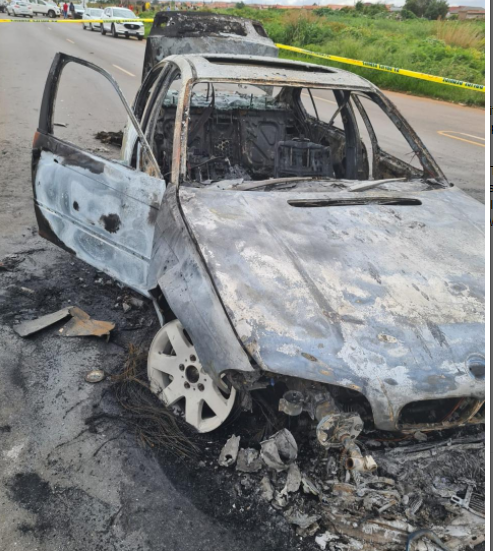 A vehicle which was destroyed during a CIT heist in Mohlakeng on Wednesday morning.
Image: Supplied / SAPS

The head of an alleged cash-in-transit robber was blown off when the gang he was part of tried to blast open a van on Wednesday morning near Randfontein, west of Johannesburg, police said.

The incident happened on the R28 Main Reef Road in the Mohlakeng area.

Col Athlenda Mathe said police officers from the Bekkersdal police station came across the heist in progress at about 9am on Wednesday.

“At the scene, police found that the G4S cash van had already been bombed. Next to the cash van the body of a man, who preliminary investigations suggest was a suspect and that his head may have been blown off during one of the explosions, was also discovered.”

Mathe said a burnt-out 3-series BMW - which was stolen in Kagiso in December - was also found at the scene.

The police are searching for the suspects, who fled the scene and are believed to be in the Soweto area. They took an undisclosed amount of cash.

It is possible that the same people who carried out a heist in Pretoria on Tuesday struck again near Soweto on Wednesday.
News
1 year ago

A Fidelity security guard and a bystander were shot and wounded during a cash-in-transit heist in Evaton, south of Johannesburg, on Monday.
News
1 year ago