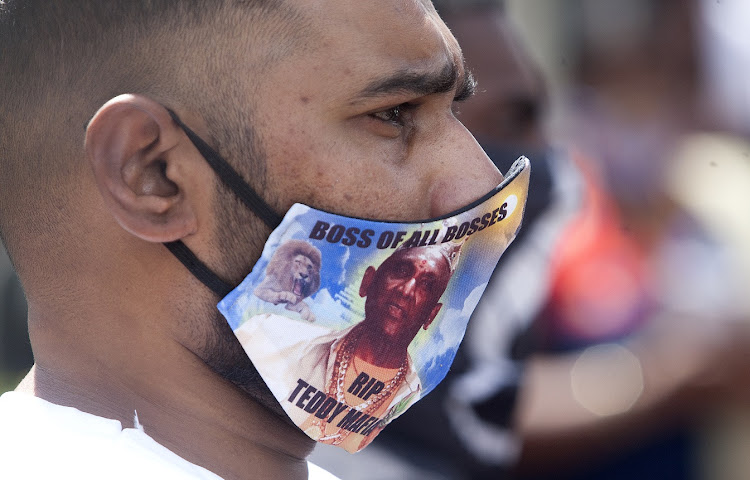 A man attending the funeral of Yaganathan Pillay in Shallcross on Thursday dons a mask with a picture of the slain 63-year-old suspected drug kingpin printed on it.
Image: Khaya Ngwenya

The younger brother of slain suspected drug kingpin, Yaganathan Pillay, also known as a Teddy Mafia, has spoken out against what he say are corrupt police, saying they were the reason for the violent mob justice meted out to two men believed to be behind Pillay's death.

Ronnie Pillay, 59, gave an emotional interview during his brother's funeral on Thursday as dozens gathered in Taurus Street in Shallcross, Durban, to pay their final respects.

He lambasted the police, saying there was a drug war taking place in Shallcross and police had done nothing to make any arrests in relation to the eight murders which had occurred since December 2019.

“There is corruption with police and criminals. The police are well aware of what is transpiring in this country — they are well aware. There is a drug war taking place here, there's a drug war in regard to sales and distribution.”

He went on to claim there were links between certain “drug lords” in Durban and senior police officials, claiming the rot stretched as far as senior officials in Pretoria.

Ronnie Pillay - the younger brother of suspected drug kingpin #TeddyMafia - claims senior police officials in Pretoria are in cahoots with drug lords in the country and says it is about time government did something about it ⁦@TimesLIVE⁩ pic.twitter.com/YwTfK2YGI9

Police minister Bheki Cele's spokesperson Lirandzu Themba said that Cele wanted the person making the comment to tell the police “who exactly in Pretoria is allegedly taking the bribes” — and was urging him to “expose the alleged rot”.

Concerning the gory sequence of events which saw his brother's alleged killers shot, beheaded and set alight in public on Monday, he said: “The reason the community reacted in such a manner is because there is plenty of anger and total animosity against police reaction, especially within the areas of Chatsworth and Shallcross.

“From 2019 right up until 2020, there were eight drive-by shootings and up until now no-one has been arrested and the police have done nothing about it.”

On Tuesday national police minister Bheki Cele questioned police as to why Teddy Mafia was never brought to book despite being a “known gangster and drug dealer”.

Police minister Bheki Cele has some tough questions for his officers in Durban, asking why Yaganathan Pillay, known as Teddy Mafia, was never brought ...
News
5 months ago

In describing his brother, Pillay said, “He was who he was.”

“I can tell you, a fact is a fact — he was who he was but I, myself, personally, had police officers, senior guys, coming to me and offering their condolences ... I had top government officials calling me and saying my brother was a nice person.”

He called for a national commission to address the aspect of corrupt police officers in the country.

The KZN organised crime unit has taken over investigations into the murder of suspected Durban drug kingpin Yaganathan Pillay.
News
5 months ago

Yaganathan Pillay, commonly known as Teddy Mafia, was shot dead at his home in Shallcross on Monday.
News
5 months ago