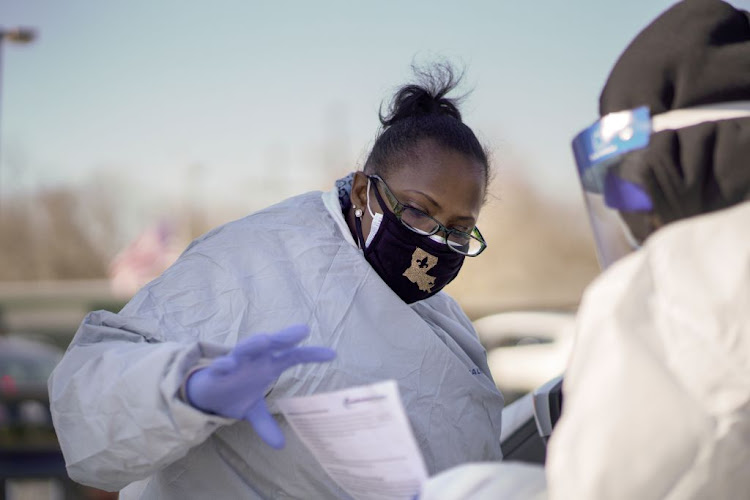 Registered nurse Paulette Braxton, left, goes over medical information with a patient before administering a Moderna Covid-19 vaccination at InclusivCare in Avondale, Louisiana, US, on January 9 2021.
Image: REUTERS/Kathleen Flynn

South Africa recorded 339 deaths in the past 24 hours, health minister Dr Zweli Mkhize said in a statement on Sunday.

Government has roped in religious leaders to assist in communicating facts around the Covid-19 pandemic, the same day that two church leaders were arrested for contravention of lockdown regulations.

According to the President’s Twitter account, on Sunday evening he concluded an engagement with interfaith leaders where a Covid-19 risk-adjusted strategy was discussed.

“At a time of rapidly rising infections and sadly, many deaths, we gave an update on the rate of infections, hospital admissions, lives lost and the vaccine rollout strategy.

Pretoria's Steve Biko Academic Hospital is experiencing a sharp increase in the number of Covid-19 patients, which has been noted since December, says the Gauteng health department.

“The increased number of patients are sicker and require critical care, with some arriving in groups and putting serious pressure on the facility,” the department said.

Some of the patients are coming from private facilities because of lack of space, while others are self-referred from other provinces such as North West, Mpumalanga and Limpopo.

Belgium's death toll from coronavirus infections, one of the highest per capita in the world, has breached the 20,000 mark, according to official data published on Sunday.

The country, home to the headquarters of the EU and NATO, has played down comparisons that show it to be one of the world's worst hit by the pandemic, but virologists point to some missteps and systemic problems.

Public health institute Sciensano said 20,038 people have died in Belgium, according to the official count as of Sunday. An average of 58 people in Belgium died from Covid-19 each day in the seven days to January 6, a decrease of 15% from the previous seven-day period.

Belgium is the second-highest in the world for deaths in proportion to its overall population, behind the tiny city state of San Marino, according to a tracker by Johns Hopkins University updated on Saturday.

Britain has now given around 2 million people a Covid-19 vaccination, health secretary Matt Hancock said on Sunday ahead of a ramp-up in the roll-out of the shots on Monday.

"Over the last week we've vaccinated more people than in the entirety of December, so we're accelerating the roll-out," he told BBC TV.

Asked how many people had been vaccinated, Hancock said: "It's around the 2 million mark, but we're going to publish the exact figures tomorrow and then henceforth on a daily basis."

The government has chased everybody off the beaches, but insists they queue up to renew their car licence discs.

The contradiction makes no sense according to the DA transport spokesperson Tim Brauteseth, who on Sunday slammed transport minister Fikile Mbalula for double standards.

Get off the beaches, and start queuing: Government accused of double...

Deputy minister of employment and labour Boitumelo Moloi has been hospitalised due to Covid-19, the presidency announced on Sunday.

Cabinet spokesperson Phumla Williams, in a statement, said Moloi was admitted to hospital on January 5 after not feeling well and received her Covid-19 positive results the following day.

Correctional services officials are ramping up efforts to contain Covid-19 after an alarming increase in positive cases at its Helderstroom facility in the Overberg town of Caledon.

In total 152 inmates and eight officials have now tested positive at the facility, with infections almost doubling in a 24-hour period over the weekend.

Authorities also confirmed 456 deaths in the past 24 hours, taking the official death toll to 61,837.

SA testing vaccines on variant, hopes for results within 2 weeks

South African scientists are testing whether vaccines will be less effective against a Covid-19 variant first detected locally and hope for initial results within two weeks, a professor at the national communicable disease institute said.

The variant, known as 501Y.V2, was identified by South African genomics experts late last year and is thought to be more contagious than older variants.

Professor Penny Moore told Reuters the National Institute of Communicable Diseases had received samples from several local vaccine trials, including Oxford University and AstraZeneca's shot, and would try to find out whether antibody responses are reduced against 501Y.V2.

SA testing vaccines on variant, hopes for results within 2 weeks

Brazilian researchers have identified the concerning new coronavirus variant first discovered in SA in a woman who contracted Covid-19 for the second time, and said it was the first such case reported in the world.

There have been other cases of reinfection in Brazil and the South African variant had previous been detected, but reinfection with this mutation of the virus is believed to be a first, researchers said.

As a record number of new infections overwhelmed some hospitals this week, SA's long-awaited vaccine programme went into overdrive, with the first jab expected to be administered by the end of January and the government in "advanced" negotiations with vaccine manufacturers across the globe.

Health minister Zweli Mkhize told the Sunday Times that despite concerns by some over the perceived slow pace of securing vaccines, SA will complete its vaccination programme "with many other countries that started ahead of us".

A comprehensive document on the rollout was distributed to stakeholders this week, revealing that the government aims to vaccinate up to 316,000 people a day. It says the government will need 6,300 full-time vaccinators, who will each administer the vaccine to as many as 50 people per day.

More than 60 Covid vaccines are being tested in human clinical trials, and 80 are in preclinical and animal trials.

This month, according to an announcement this week by health minister Zweli Mkhize, SA will receive a million doses of the Oxford-AstraZeneca vaccine from the Serum Institute of India. These will be given to health workers. Another 500,000 doses are due next month.

But many questions remain about the broader vaccine rollout, and this week the Sunday Times put some of them to three experts: Prof Barry Schoub, vaccinologist and chair of the ministerial advisory committee on Covid-19 vaccines; Prof Glenda Gray, vaccinologist and president of the South African Medical Research Council; and Dr Ryan Noach, CEO of Discovery Health.

The number of confirmed coronavirus cases in Germany increased by 16,946 to 1,908,527, data from the Robert Koch Institute (RKI) for infectious diseases showed on Sunday.

The National Health Commission said in its daily bulletin that 21 of the new cases were imported.

The bulk of locally transmitted cases, 46 out of 48, were in Hebei, the province surrounding Beijing which entered a "wartime mode" this week as it battles a new cluster of coronavirus infections.

Mexico reported 16,105 new confirmed coronavirus cases and 1,135 more fatalities on Saturday, according to health ministry data, bringing its total to 1,524,036 infections and 133,204 deaths.

The new daily death toll marks the fifth consecutive day that officials have reported more than 1,000 fatalities due to the highly contagious disease caused by the virus.

The real number of infected people and deaths is likely significantly higher than the official count, the ministry has said, due to little testing.

Government education officials are confident that matric marking will be completed by January 22 despite the fact that about 1,700 markers, more than half of them in Gauteng, have declined to report for duty.

By Thursday, 171 markers had been found to have Covid-19 at some of the 177 marking centres now operating.

Michelle Durand was helpless on New Year's Day when a security guard at Busamed Hillcrest Private Hospital turned away her mother, who was battling to breathe, because the facility was full.

"My mom was turning blue in the face. As I live in Botha's Hill and given the emergency situation I was in, it was the closest hospital. When I arrived at the boom gate at the entrance, the security guard refused us access. The more I said it was an emergency and he needs to look at the state of my mother, the more he stood his ground and said no entry into the hospital, it is closed," Durand said.

Doctors said private hospitals appear to be battling in the second wave of the Covid epidemic, and had to seek beds for their patients in the public sector because of capacity constraints, particularly staffing.

When the government lodged its application to appeal the Western Cape High Court ruling that the lockdown tobacco ban had violated the constitution, smokers immediately began to get jittery, fearing another ban was imminent.

But the government’s case as set out in its appeal court papers suggests a very different preoccupation.

Each time Kouthar Davids swallows ivermectin to soothe her aching body while recovering from the ravages of Covid-19, she is flouting regulations because the drug is deemed unfit for human consumption in the treatment of the virus.

But for the first time in about a month the Cape Town conveyancing paralegal is finally feeling relief from debilitating migraines, body aches and nausea. She claims it is due to the antiparasitic medicine, which is used on livestock but is increasingly being used by people around the world to combat the effects of Covid-19.

ICUs clogged on the way in, morgues on the way out in California's Covid crisis

Southern California is so overwhelmed with coronavirus cases that patients are backed up trying to get into hospitals, and corpses get stuck in ...
News
1 year ago

SA recorded its worst day for Covid-19 infections, with 21,980 cases confirmed in the past 24 hours.
News
1 year ago

Close to 50 burials took place within the last week of December at two cemeteries in the city of uMhlathuze.
News
1 year ago