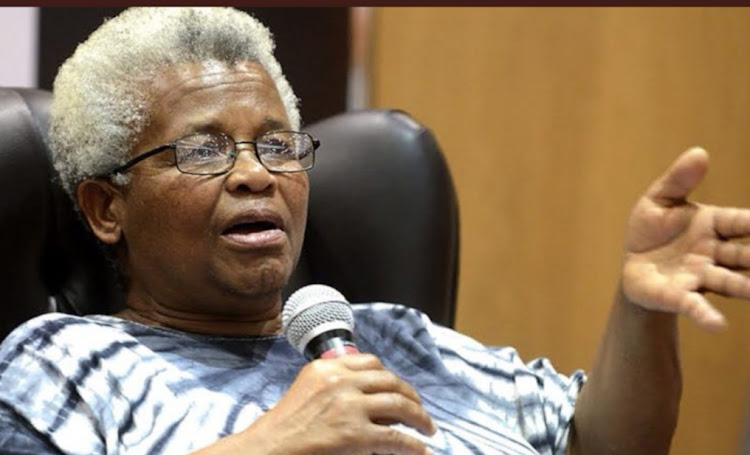 Founder of the Rural Women's Movement Sizani Ngubane was laid to rest in KwaZulu-Natal on Saturday, two weeks after succumbing to Covid-19.
Image: via Twitter

Champion of rural women’s rights Sizani Ngubane was laid to rest in the KwaZulu-Natal midlands on Saturday, more than two weeks after she died alone in her home from complications related to Covid-19.

Ngubane, 74, was the founder of the Rural Women’s Movement which has been at the forefront of advancing the legal rights of rural women in SA.

The movement and its members are applicants in a high court case against the Ingonyama Trust, its board, ministers and others relating to the alleged imposition of leases by the trust, and rentals to be paid to them by the rural poor. The matter is pending.

In a tribute to Ngubane, violence and human rights monitor Mary de Haas said her death on December 23 sent shock waves through her extensive South African and international networks.

De Haas accused the health department and police in Ngubane's hometown of Hilton of failing to respond “to the barrage of pleas from her son Thulani, who had himself been hospitalised, seriously ill with Covid-19, to assist her”.

While parliament is still considering how to amend section 25 of the constitution to allow for expropriation of land without compensation, the ...
Opinion & Analysis
1 year ago

She said after being discharged from hospital, Thulani and his son went to check on Ngubane at her home after receiving no help. They found Ngubane’s decomposing body in the dining room of her home.

“What they found was something no child or grandchild should have to deal with. Their experience [was] a gross violation of their mother’s/grandmother’s dignity, and their own cultural norms about respect.

“Sizani Ngubane was a remarkable woman who has left a void in her brainchild, the Rural Women’s Movement.

“Having been part of the National Women’s Coalition in the early 1990s, and having worked for the Association for Rural Advancement in Pietermaritzburg in the 1990s, she was determined to do something to empower the least empowered women of the province, those living in rural areas,” said De Haas.

“In the early 2000s she registered the Rural Women’s Movement with an outreach to the furthest corners of the province. This movement has played, and continues to play, an important role in advancing the legal rights of rural women.

“The Rural Women’s Movement made a significant contribution to the 2010 striking down of the Communal Land Rights Act of 2004 by the Constitutional Court, one of the reasons being that the legislation had been passed without due input from rural residents.

“Tragically, Sizani has not lived to see the outcome of this case as judgment is still pending,” said De Haas.

In a Twitter post, the Rural Women’s Movement described Ngubane as “fearless, creative, kind [and] determined like no other,” adding that she had “an unwavering belief in others and an endless reservoir of empathy and ubuntu.”

“Reflecting on the life of uGogo Sizani, we are reminded of Cornel West’s proclamation that ‘justice is what love looks like in public’.

“For decades, spanning minority rule to the present, uGogo Sizani was a freedom fighter for love both in public and in private.”

One of her supporters wrote on Twitter: “Mama Sizani Ngubane was one of the most indomitable people I’ve ever known. The epitome of grit, grace and good humour, even where most others would have retreated. It is devastating to read of the indignity of her last days.”

The Ingonyama Trust has once again failed to adhere to the legal mandate it was given by the act of parliament that created it in 1994.
Opinion & Analysis
2 years ago

‘If our mine doesn’t go ahead, thousands of jobs will be lost’

CEO says 1,600 jobs will be gone in two years, and 20,000 will lose income, without the Somkhele expansion in KZN
News
1 year ago

‘My feisty hero’: daughter of slain anti-mining activist pays tribute to her mom

Others remember Fikile Ntshangase as an ‘incredible’ feminist who ‘spoke for justice ... spoke for truth’
News
1 year ago