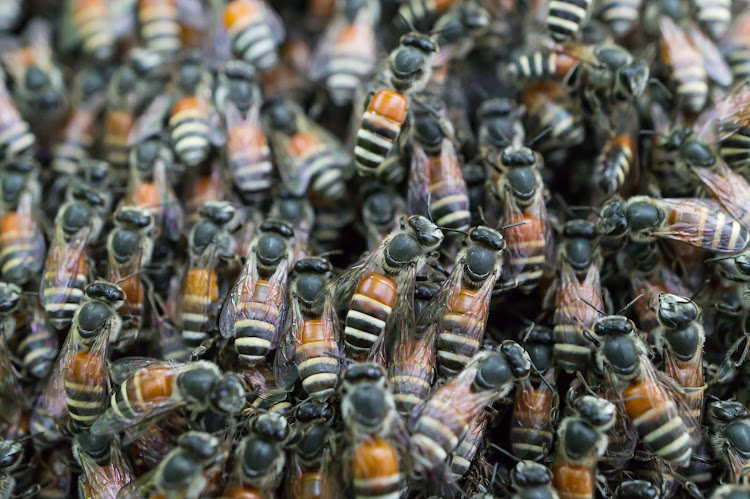 According to StatsSA, 109 deaths caused by hornets, wasps and bees were documented between 2001 and 2011. File photo,
Image: 123RF/Sirawit Hengthabthim

What started out as a relaxing family drive in a nature estate in Mpumalanga ended in horror after a freak accident involving a swarm of bees on Sunday afternoon.

According to ER24's Ross Campbell, a family of five was enjoying an afternoon drive in a veld just south of Mbombela, formally known as Nelspruit, when they drove over a bee hive. Their car windows were open.

All five — the couple, their two young daughters and their baby daughter — are in serious condition at Mediclinic Nelspruit after each receiving hundreds of bee stings.

“The bees swarmed and got into the vehicle through the open windows, causing the family to panic and run,” Campbell said.

The eldest daughter, a 12-year-old, was able to run to a nearby farmhouse to get help — all the while being stung by a following swarm. The owner of the property sprayed her with water and told her to jump into their pool while he called the ambulance.

Why Joburgers are obsessed with jacarandas

Pretoria may be known as the Jacaranda City, but Egoli gives it a run for its money come October, say these Sunday Times Lifestyle writers
Lifestyle
7 months ago

The man also tried to drive to the rest of the family but had to turn back because of the angry swarm.

ER24 paramedics arrived on the scene at 6.15pm and used firefighters' protective clothing to avoid the stings.

“The father was heard screaming for help from a vlei where he had waded into the water with his toddler and baby in an attempt to escape the bees.

“Our medic managed to get close enough to grab the baby and toddler and race back to the farmhouse, handing them directly to the ambulance crew who rushed them through to the hospital. The oldest daughter had also by that time been taken through to hospital.

“More ER24 paramedics had arrived on the scene and they returned to the vlei for the father and managed to find the mother who had run back to their car in all the panic.”

According to Stats SA, 109 deaths caused by hornets, wasps and bees were documented between 2001 and 2011.

PODCAST | Is pollen the bee’s knees of forensic science?

In the world of forensic palynology, tiny grains of pollen help solve some of the most mysterious crimes
Science
5 months ago

The Nelson Mandela University reports that an estimated 1% of the population have a systemic allergy to bee stings. The Allergy Foundation SA warns that the African honey bee is known to be more aggressive than bees elsewhere.

The foundation warns that stings can be life-threatening to people who are very allergic to bee venom, in older people with heart and chest complaints, or those who have multiple stings.

Bee stings have been in the news recently, the latest was in Atlasville, east of Johannesburg, where pensioner Jack Leroy was stung by a swarm on December 26. Leroy died on January 1 after the venom affected the functioning of his heart and kidneys. He was cutting the grass around a meter box when he was stung.

On December 10, 15 people were treated in the KwaZulu-Natal Midlands after a swarm of bees invaded a venue full of people. Four people suffered anaphylaxis because of multiple stings, but all were discharged from hospital that night.

In March last year Johanna de Beer was attacked and stung by 300 bees at her Marble Hall home in Limpopo. The bees were living near the house in a tree stump. That day when De Beer returned home a second swarm of nomadic bees had disturbed the hive, causing them to attack her. Despite her body going into shock, De Beer has made a full recovery.

Three dogs were killed after a swarm of bees took over a street in Richards Bay in KZN on February 11. The swarm also injured four people working outside their homes. It is not known why the bees were swarming.

Mokgadi Mabela is the queen bee of organic honey in SA

The Arrive Alive online road safety awareness group warns of bee attacks on vehicle passengers but says they are uncommon.

“In recent years we shared several incidents of bee attacks and the reports from emergency services who attended to the victims of these attacks.”

Cape honey bees are just the bees’ knees at reproduction

Thousands of virgin births take place every year in a vicious Cape matriarchy, and scientists who have found the gene responsible for the phenomenon ...
News
1 year ago

The car production line is closed, but a 250,000-strong workforce is creating a buzz at the home of the Rolls-Royce factory in Goodwood, UK
Motoring
1 year ago

Bees and berries part of a new investment buzz

The investment horizon for the blueberry bushes is eight years, the beehives 10 years and the solar panels 20 years
Business
9 months ago
Next Article