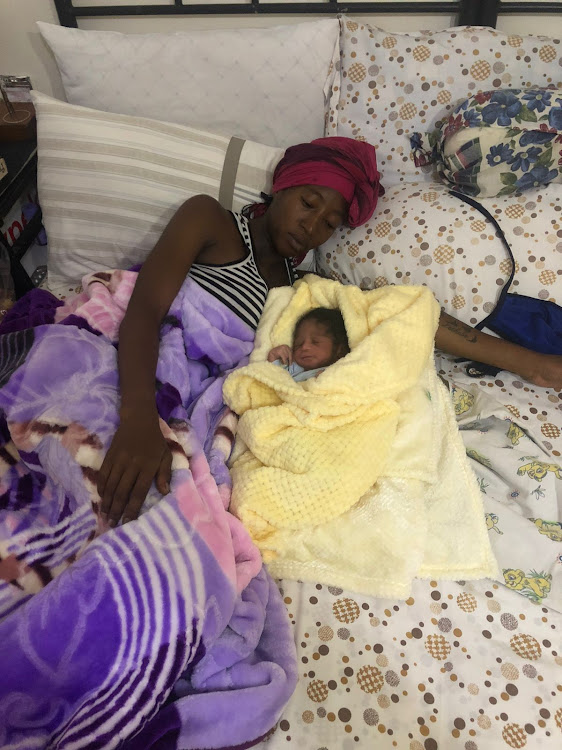 Philisiwe Mabena with her newborn baby boy who fell while she was giving birth to him at South Rand Hospital in Joburg.
Image: Supplied

A 23-year-old new mother, whose baby fell while she was giving birth, and who was allegedly assaulted by hospital security, says she is still traumatised by the ordeal.

Philisiwe Mabena, from Regents Park, south of Johannesburg, said she was happy that she and her baby boy were alive.

According to the mother, her baby boy fell while she was trying to get help from nurses and doctors at the South Rand Hospital.

“I was screaming and asking for help, but no-one came. I kept on pleading for help and said the baby’s head is out. But no-one came to assist me,” the mother told TimesLIVE in a phone interview from her home.

The interview came shortly after Mabena had opened assault and negligence cases with police.

She said all she remembered was seeing her baby fall to the floor.

“I then passed out, and I'm not sure what happened next,” she said.

Mother lays charges after hospital's 'assault and neglect of her newborn'

A Johannesburg woman has opened assault and negligence charges after she was allegedly assaulted at a hospital in the city just hours before she gave ...
News
1 year ago

The first-time mother — who said she was still weak and traumatised by the incident — said she suffered more humiliation at the hands of the hospital staff, who she said treated her like she was mentally ill.

“They called me all sort of names and said I was crazy because I was furious at what happened and the lack of care I received,” she said. Mabena alleges the staff even wanted to take her baby away from her, saying she was a danger to her newborn.

“They called social workers for me and said I’m not fit to look after the child. They said this because I was furious about their negligence and they didn’t want to take responsibility for their actions. They made out I was at fault,” she said.

But after the traumatic experience of the birth, she said she was assaulted by hospital security as she was trying to walk out of the ward to look for her mother.

“They didn’t want me to leave the ward. In the meeting with the social worker, I felt overpowered because they [nurses, doctors and a social worker] were all ganging up against me. They were all together and supporting each other. I was alone and needed someone who would be on my side. They were insisting that I need to give away my child,” she said.

A Cape Town mother who spent her festive season heartbroken and in despair after she thought her premature baby boy had died in hospital has been ...
News
1 year ago

The new mother then asked to end the interview, saying she was feeling weak and wanted to rest.

Philisiwe’s mother, Louisa, 58, said she was heartbroken by what her daughter and grandson went through.

“Childbirth alone is painful and for one to also suffer emotional pain is just dreadful. I wish I could take away the pain my daughter and grandson are going through. Imagine a newborn baby with bones that are still not formed falling to the floor. This is just painful,” she said.

She said that when she met with the social worker, the same statement of her daughter being unfit to look after the baby was repeated — and she told the social worker that if that was the case, the baby could be discharged into her care.

The grandmother said the baby had a mark on his back and said it probably came from the fall.

A Johannesburg mother is encouraging soon-to-be moms to explore the idea of giving birth at home.
News
1 year ago

Louisa said she insisted that her daughter and grandson be discharged because she didn’t trust they would be safe.

On her daughter and grandson’s conditions, Louisa said she was not sure about what to do as they both looked weak. But she was insistent that she would not take them back to South Rand Hospital.

The spokesperson for the Gauteng department of health, Kwara Kekana, told TimesLIVE earlier that the department would look into the matter.

DA MP Luyolo Mphithi said he helped the mother open an assault case at Moffatview police station. He said he had contacted the provincial health department head and was waiting for feedback.

In a year where sudden, suffocating deaths due to Covid-19 hit many South Africans, joy paid a visit to 54 KwaZulu-Natal families in the form of new ...
News
1 year ago

A father from Centurion was arrested on Friday for rushing to a nearby hospital during curfew hours to buy formula milk for his newborn baby.
News
1 year ago

A newborn baby girl was found alive on Wednesday morning in a shallow grave in the Ikageng, Greenfields, area of Potchefstroom.
News
1 year ago