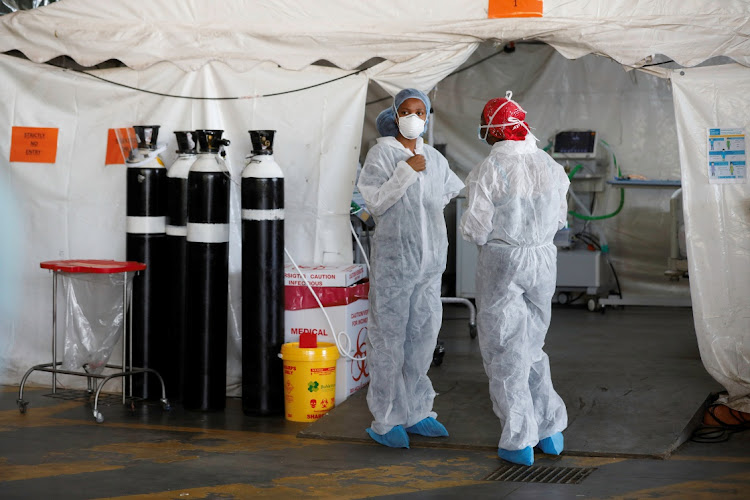 SA recorded nearly 650 new Covid-19 related deaths in the past 24 hours, as the country fast approached the 40,000 fatalities mark.

Health minister Dr Zweli Mkhize said that 647 new fatalities had been recorded, taking the death toll from the pandemic to 39,501.

Different political parties have paid tribute to the late minister in the presidency, Jackson Mthembu, who succumbed to Covid-19 related complications on Thursday.

UDM leader Bantu Holomisa described Mthembu as brave. He recalled Mthembu’s stance at the ANC national executive committee meetings during the turbulent times of former president Jacob Zuma’s tenure — specifically his call for the entire NEC to step down after then public protector Thuli Madonsela’s report into the saga over Zuma's Nkandla homestead.

SA will pay $5.25 ( about R80) per dose for 1.5 million shots of AstraZeneca's coronavirus vaccine from the Serum Institute of India (SII), a senior official said on Thursday, more than some wealthier countries are paying.

Health department Deputy Director-General Anban Pillay told Reuters that SII's price was based on SA's status as an upper-middle-income country under a World Bank classification.

The price is higher than the $3 (R45) a dose that SA and other countries on the continent are due to pay for the same vaccine under an AU arrangement, and the 2.5 euros (R45) per dose EU countries have agreed to pay.

On Thursday, President Cyril Ramaphosa announced that Mthembu, the minister in the presidency, had succumbed to Covid-19 related complications.

Mthembu's life was nothing short of hard-fought and his allegiance in the fight against the apartheid regime was evident.

Jackson Mthembu died with his boots on, working for the people of SA.

This was the moving tribute ANC deputy secretary-general Jessie Duarte paid to the late minister in the presidency on Thursday after the shocking news of his death from Covid-19 related complications.

President Cyril Ramaphosa announced on Thursday afternoon that Mthembu had died earlier on Thursday after being diagnosed with Covid-19 on Monday January 11. The news sent shock waves around the country.

'We have lost a really important person in our lives': Jesse Duarte...

Social media was flooded with tributes to late minister in the presidency Jackson Mthembu after his death on Thursday morning.

President Cyril Ramaphosa said in a statement that Mthembu had died of Covid-19 related complications. He was 62 at the time of his death.

On January 11, Mthembu announced that he had tested positive for Covid-19 after “showing some symptoms”.

Minister in the presidency, Jackson Mthembu, has died of Covid-19 related complications.

President Cyril Ramaphosa said in a statement on Thursday that Mthembu died earlier that morning.

“Minister Mthembu was an exemplary leader, an activist and lifelong champion of freedom and democracy. He was a much-loved and greatly respected colleague and comrade, whose passing leaves our nation at a loss.

On Thursday the group said it has “under 3,000" Covid-19 positive patients in its hospitals countrywide.

To cope with demand, Netcare has in the past fortnight opened three “clinical decision units” to augment capacity in Limpopo, the North West and Gauteng for coronavirus emergency patients.

Flags flew at half mast in KwaZulu-Natal for the second day, when transport, community safety and liaison MEC Bheki Ntuli was laid to rest in Empangeni on Thursday.

Ntuli, who passed away on Saturday due to Covid-19 related complications, was given a special official provincial funeral.

On Wednesday, veteran broadcaster Welcome Nzimande was afforded the same honour, when he was laid to rest in Richmond.

Russia says Brazil is producing Sputnik V vaccine, to up output in Feb

The Brazilian manufacturer of Russia's Sputnik V vaccine is already producing shots, the head of the Russian Direct Investment Fund (RDIF) said on Thursday, and that output will be raised in February.

RDIF chief Kirill Dmitriev said he expected the question of Sputnik V's approval in Brazil to be resolved in the next few weeks.

More soldiers have been deployed to enforce Covid regulations: What you need to know

President Cyril Ramaphosa said the recent deployment of soldiers during level 3 of lockdown was to help preserve life, health and property and would prevent crime.

Ramaphosa informed parliament earlier this week in a letter received by the National Assembly speaker, Thandi Modise, and National Council of Provinces chairperson Amos Masondo that he had approved the deployment of more than 2,000 soldiers as SA remained on lockdown.

More soldiers have been deployed to enforce Covid regulations: What...

A Chinese distributor of Sinovac's Covid-19 vaccine said on Thursday it is facing a shortage of drivers, as the worst wave of new infections in almost a year adds to the urgency of China's inoculation drive.

Jointown Pharmaceutical Group, which started distributing a vaccine made by the Sinovac company this month, has hired 120 drivers to handle shipments but needs 72 more to ease a bottleneck while ensuring normal operations of other businesses, its vice chairman, Liu Zhaonian, told a news conference.

Liu did not elaborate on the reason for the shortage of drivers but said it was expecting to fill the vacancies by Monday.

China reported 144 new infections as of Wednesday, the highest number of daily infections since March 1, 2020.

The tally remains a fraction of what it saw during the height of the outbreak in January-February 2020, however.

Authorities are stepping up a vaccination drive with the goal of vaccinating priority groups before the travel-heavy Lunar New Year holiday next month.

China has used three vaccines including the Sinovac shot in an emergency programme that began in July but has only formally approved one, from Sinopharm, for the general public. A fourth is only being used by the military.Jointown said it has shipped Sinovac's Covid-19 vaccine to more than 10 provinces since January 2.

A big fire has broken out at a plant being built for the Serum Institute of India (SII), the world's biggest vaccine maker, but it will not affect production of coronavirus vaccines, a source close to the firm said.

Africa's coronavirus case fatality rate stands at 2.5%, higher than the global level of 2.2% - a trend that is alarming experts, the head of the continent's disease control body said on Thursday.

“The case fatality rate is beginning to be very worrying and concerning for all of us,” he said.

Dlamini-Zuma fails to respond to AfriForum, Solidarity on vaccine plan

AfriForum and Solidarity had given Dlamini-Zuma until Wednesday to provide answers on the government’s plan for the rollout of Covid-19 vaccines.

Dlamini-Zuma fails to respond to AfriForum, Solidarity on vaccine plan

Norway anticipates reduced supply of the Pfizer/BioNTech vaccine until the second week of February, but has an emergency stockpile and will continue administering doses as planned, the government's public health body said.

Pfizer said last week it would until early February reduce deliveries to Europe of the shots developed with its partner BioNTech while it upgraded production capacity.

Camilla Stoltenberg, head of the Norwegian Institute of Public Health, said the company had given varying guidance, but normal supplies were expected to resume by mid-February."

Pfizer has informed us of adjustments to the weekly deliveries over the coming weeks, and up to the second week of February.

These adjustments of weekly shipping vary in size, and lie between 1% and 15% per week," she told Reuters.

SA pharmaceutical company Biovac Institute has been contracted by the government to import, store and distribute coronavirus vaccines for front-line health-care workers, a letter from the National Treasury shows.

Health-care experts have urged the government to share a detailed plan on vaccine rollout across the country.

Amid the scramble to secure a healthy supply of Covid-19 vaccines, the SA government has been accused of not acting fast enough. Deputy director-general of health Dr Anban Pillay, who has been directly involved in the vaccine procurement drive, addresses the concerns of critics.

SA will pay $5.25 (about R78.17) per dose for Covid-19 vaccines from the Serum Institute of India (SII) — well above what others, including developed nations, are paying for the same shots, Business Day reported on Thursday.

More than 165,000 people in the industry have lost their jobs since lockdowns started at the end of March

The SA Social Security Agency (Sassa) has told parliament that it does not have the money to reinstate and extend the temporary disability grants that lapsed last month.

Dianne Dunkerley, Sassa's executive manager responsible for grants administration, told the National Assembly's social development portfolio committee that the extension of the grant to about 210,000 recipients for the remainder of the financial year would cost about R1.2bn.

Gauteng-based athletes have endured months of struggle, seemingly without help from the provincial government.

Unable to compete due to Covid-19 for almost a year, many athletes had hoped for assistance — but claimed that despite submitting applications for Covid relief funding, they had been left empty-handed.

'Our people have suffered enough': Gauteng legislature worried as...

China plans to impose strict Covid testing requirements during the Lunar New Year holiday season, when tens of millions of people are expected to travel, as it battles the worst wave of new infections since March 2020.

Tokyo Games may be too big a gamble, disease expert says

As embattled Tokyo Olympics organisers enter the final six months of preparations for the delayed Games on Saturday, virus experts believe hosting the world's biggest sporting event may be too big a gamble.

The Olympics are due to start on July 23 but with much of Japan in a state of emergency and growing public opposition, organisers are under increasing pressure.

Japan has been less severely hit by the coronavirus pandemic than many other advanced economies, but a recent surge in cases spurred it to close its borders to non-resident foreigners and declare a state of emergency in Tokyo and major cities.

Tokyo Games may be too big a gamble, disease expert says

(Vaccinations) will happen for 1.4 million health between January to February, after that 17 million public workers will be vaccinated, then we will provide vaccines for 25 million seniors," he told a forum, adding he hoped by May or the end of April Indonesia could start vaccinating the general public.

India's Bharat Biotech submitted on Thursday an application for the emergency use of its Covid-19 vaccines in the Philippines, Food and Drug Administration chief Rolando Enrique Domingo said.

Bharat Biotech, which has developed COVAXIN with the Indian Council of Medical Research, is the fourth vaccine maker to apply for emergency use in the Philippines.

'If I don’t make it, I love you all': Mom of newborn's last words before dying of Covid-19

Anishca died weeks after being admitted with Covid-19 at the Groote Schuur Hospital in Cape Town. She had just given birth to her first daughter — her second child — via emergency C-section. But because of her diagnosis, she was never able to have direct contact with her child.