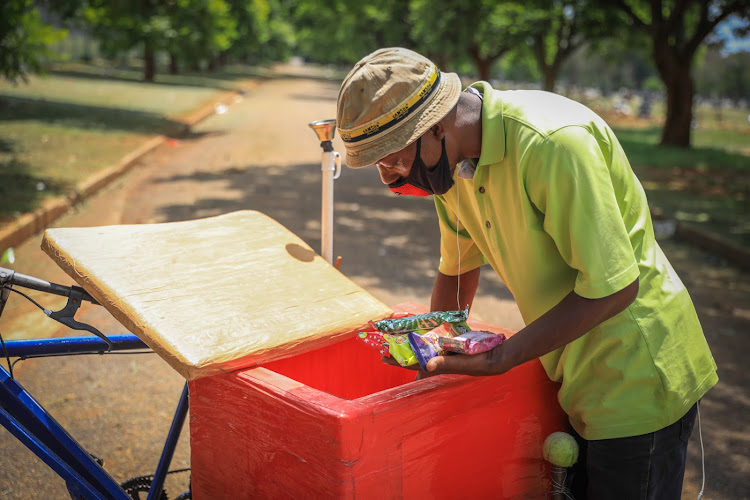 Ice-cream seller Joe Tshabalala used to make a good living selling his wares at schools and parks but the Covid-19 lockdown has changed all that and his business of 21 years has taken a huge knock.
Image: Sebabatso Mosamo

Cemeteries are sacred for many; a place to mourn, remember and reflect. But, as Covid-19 infections climb and as lockdown level 3 bites, cemeteries have become places ice-cream vendors rely on to try to put food on the table.

Driving into West Park Cemetery in Emmarentia, one immediately spots ice-cream carts  and tricycles in the distance. These are men waiting and hoping to make some sales from those burying their loved ones as schools and parks, where they generate the majority of their sales, remain closed.

The vendors say they have been hit hard by the Covid-19 pandemic — and, unlike other informal businesses, they feel their plight has been ignored.

Joe Tshabalala is one of them. He peddles around the cemetery clad in a sun hat and a face mask. He uses his blue and red tricycle, carrying a square box with ice-cream and other cold desserts. He also has a smaller box with two bottles of hand sanitiser.

As you approach him, he immediately jumps off the cart to grab a sanitiser and open the cooler box to help potential customers. 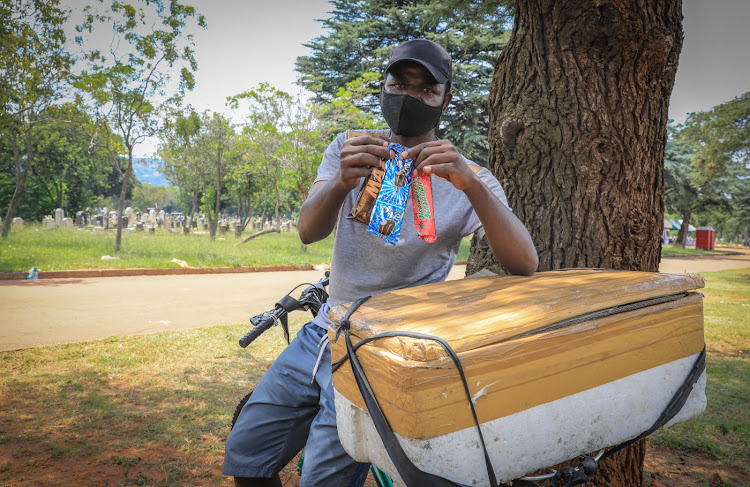 Victor Mlambo often takes home less than R50 - and sometimes nothing at all - after cycling many kilometres hoping against hope that someone will stop him and buy an ice-cream. Before Covid-19 he made a good living.
Image: Sebabatso Mosamo

The father of five, who is originally from the North West, said he ventured into the business in 1999 and never struggled to make ends meet. He sold ice-cream to four neighbouring schools during the week and various parks at the weekend.

“I have always been a provider to my family, and never struggled even on a single day until the arrival of this virus. Things changed drastically and the business took a hard knock,” said Tshabalala.

He said he and other vendors had not recovered since the country went into hard lockdown.

“I have been struggling to support my children. Right now I am just hustling to make sure that at least rent is paid, because it is a big headache.”

The extension of level 3 lockdown regulations, which prohibit the sale and distribution of alcohol, has been described as the death knell for many ...
News
1 year ago

“Years are different, prices change every now and then, but right now there is no business any more. I have never seen something like this in my life.”

On Thursday afternoon, Tshabalala had only sold two ice-creams, for R8 each.

“It is painful because you return home with all the stock and nothing else. It's even harder to explain to the children that times are tough.”

Tshabalala said he was new to being a sole breadwinner, having lost his wife to Covid-19.

“It was a huge blow to our family. We have not healed from her death. We underestimated Covid-19, thinking it would fade as she was a strong person.”

Another vendor, Themba Moyo of Westbury, said he too was frustrated at being unable to make a living despite putting in the effort.

The government could not care less, said Moyo, who on an average day peddles nearly 50km, usually in scorching heat, to try to make sales.

“Some of us are not scared of working hard, but the government shuts down everything. We do not receive any food parcels, or money. If we don’t wake up and sell something it means we won't eat.” 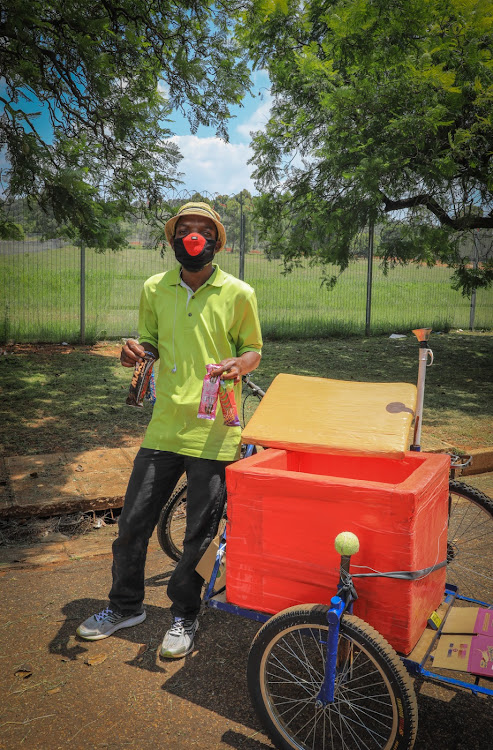 When TimesLIVE interviewed Joe Tshabalala at West Park Cemetery on a Thursday afternoon he had sold only two ice-creams, for R8 each.
Image: Sebabatso Mosamo

Victor Mlambo stands far from the graveyards with his cart. He orders that we speak softly.

Asked why, he said: “My sister, in my culture this is a sacred place ... If I had a choice, I would not be standing here.”

Mlambo said he fled his country of birth, Zimbabwe, in 2010 with the hope of finding work. After many unsuccessful attempts to start his own enterprise, he ventured into the ice-cream business in 2014.

“The past five years were really successful. I have a lot of things to show for the money I made,” he said.

Mlambo said he and other vendors now relied on funeralgoers to make “anything we get”.

“Death is not nice, we see so many funerals here every day, sometimes even 30. When we see people we just pray and hope they support us. Some understand why we have to do this and some do not.”

The father of two said that on an average Saturday before Covid-19 hit, he would make a profit of R900. On a Sunday it would be slightly less.

Like Tshabalala, there are days he makes less than R50 — or nothing at all. He would ride home with a hope and a prayer he gets stopped by a stranger to sell just one or two ice-creams.

Western Cape premier Alan Winde is offering suggestions how to allow for a controlled reopening of the economy under Covid-19 regulations, including ...
Politics
1 year ago

'Seems we're not getting our jobs back any time soon': Mzansi reacts to Mkhize praising booze ban

More than 165,000 people in the industry have lost their jobs since lockdowns started at the end of March.
Business Times
1 year ago