Just before he died in chopper crash, Joburg doctor tried to save Mthembu 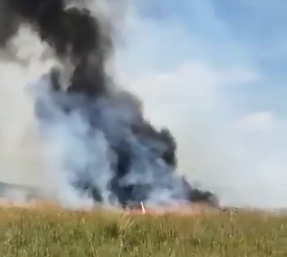 A Netcare 911 medical helicopter crashed near Bergville in KwaZulu-Natal on Thursday, claiming the lives of all five people on board.
Image: Twitter / via @Abramjee

On Thursday morning, anaesthetist Dr Kgopotso Rudolph Mononyane was meant to leave Johannesburg’s Milpark Hospital as part of a medical crew flying to Durban to transport a critically ill patient.

However, that flight was put on hold when the doctor called in to try to save the life of minister in the presidency Jackson Mthembu. Despite his best efforts, Mthembu succumbed to complications related to Covid-19.

Shortly after, Mononyane boarded the medical flight to Durban which crashed near Bergville, killing all on board, in the early afternoon.

He spoke about the incident about 5½ minutes into the interview.

Mononyane was one of five people who died when the helicopter crashed.

They were travelling from Milpark Hospital to pick up a critical patient from a private hospital in Hillcrest, west of Durban.

“One of the doctors who has did in the crash was called by a friend, Dr Paul Williams, to come and assist to save minister Mthembu during that difficult time,” said Mkhize.

“He dropped the trip. His team waited and  delayed the flight. He came back to help minister Mthembu. They worked very hard. Mononyane came together with other doctors to do everything they could to support the minister.

“Unfortunately after he flew out he had a fatal accident,” Mkhize said.

A helicopter pilot and four health-care workers died when the helicopter they were travelling in crashed in KwaZulu-Natal on Thursday.
News
1 year ago

“We’d like to convey our very sincere condolences to the families of all the doctors and  the pilot who lost their lives. We know their dedication, hard work and effort to try to save lives all the time.”

On Friday, Mkhize further paid tribute to the doctors.

“This is a tragic loss that has robbed the country of highly skilled professionals who were prepared to put the lives of others before their own. I salute our departed colleagues and the pilot who fell in the line of duty.

“This country has weathered the Covid-19 storm because of the sheer dedication of professionals such as these.

“We convey our sincere condolences to the families and loved ones of our colleagues lost in this terrible accident. May their souls rest in eternal peace and may we never forget they remained dedicated and committed to delivering quality health care right to the end of their lives,” he said.

Mkhize also called for a full investigation in the accident.

“We call on the aviation industry to thoroughly investigate the circumstances surrounding the helicopter crash so we may never in future suffer such a devastating loss of valuable front-line responders who travel in emergency aircraft.”

Jackson Mthembu to be given official state funeral this weekend

Minister in the presidency Jackson Mthembu, who died of Covid-19 related complications on Thursday, will be given an official state funeral at the ...
Politics
1 year ago

In the eNCA interview, Mkhize said he had spoken to Mthembu about two days before his death.

“I spoke to him just before he was flown out of Steve Biko Memorial [hospital] to Milpark Hospital. He would call me every now and again. Maybe he’d call twice a day to  tell me how he was doing, and I called him to reassure him he was in good hands.

“When he tested positive for Covid-19 he called to tell me and described the symptoms he was going through. Later he called back to indicate he was not happy and was feeling uncomfortable and we made arrangements for him to move to hospital.

“He was always very positive. He was a man who never really demonstrated stress whenever he had to deal with issues. He would talk, laugh and joke and make you feel at ease. Up until our last chat, he was always trying to make sure we knew he was fine and strong.

“When we received the report that he had died, we were devastated. We will miss him. A giant tree has fallen.”

SA recorded nearly 650 new Covid-19 related deaths in the past 24 hours, as the country fast approached the 40,000 fatalities mark.
News
1 year ago