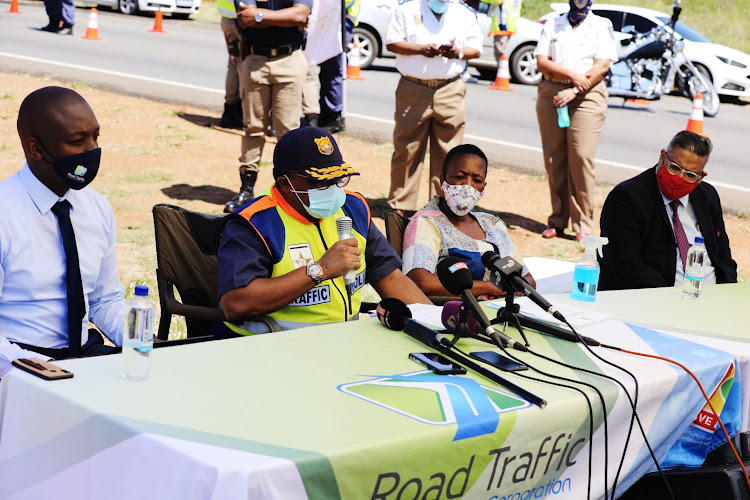 A total of 34.1% of crashes during the festive season happened during the curfew hours, between midnight and 6am, transport minister Fikile Mbalula said on Friday.
Image: via RTMC

The Western Cape recorded the biggest decline in road accident fatalities over the festive season, closely followed by KwaZulu-Natal.

Releasing the 2020 festive period stats on Friday in Johannesburg, transport minister Fikile Mbalula said the Western Cape had a decline of 15.9% - 132 fatalities compared to 157 in 2019/2020.

Mbalula said 34.1% of crashes during the festive season happened during the curfew, between midnight and 6am.

“While the numbers demonstrate that while the majority of South Africans respected the law and observed the curfew, a few intransigent motorists were on the road when they should not have been.”

A lot of accidents are happening after curfew, says Fikile Mbalula

Most accidents occurred on Fridays, Saturdays and Sundays, after the curfew time, said transport minister Fikile Mbalula on Friday, as he announced ...
News
1 year ago

He said more than half (54.3%) of fatal crashes occurred on a Friday, Saturday and Sunday, which suggests that the majority of crashes took place within residential areas long after travellers had reached their destinations.

Mbalula said the main cause of crashes were jaywalking, hit and runs, speeding, overtaking into oncoming traffic, wet and slippery surfaces and tyre bursts.

He said the ban on alcohol sale and transportation also contributed to the decline in fatalities.

“When we started to announce the curfew from 9pm and we saw police visibility on the road, the numbers drastically dropped. The sale of alcohol also contributed to the dropping of the numbers because as much as people drink alcohol underground, alcohol is scarce, you don't get it easily because the movement of alcohol with private cars is also prohibited. The drunken drivers also, in terms of numbers, were reduced on our roads, so alcohol and drinking does contribute to the number of fatalities. You can see with the pedestrians that the numbers of pedestrians who are dying have decreased,” he said.

Though the department recorded a decline in fatalities in eight of the nine provinces, it fell short of achieving its ambitious 20% target that was set for the festive season, Mbalula conceded.

“We are encouraged that these reductions make a positive contribution towards the realisation of our target of reducing fatalities on our roads. Mpumalanga is the only province that recorded an increase in fatalities.”

A woman has been killed and her child is critical after an accident on the N2 near uMdloti, north of Durban, on Wednesday.
News
1 year ago

Mbalula sent his condolences to families who lost their loved ones on the roads.

“We are saddened to note that two of our own officers are among those who perished on the roads this year,” he said.

“Inspector Tefoamuel Motaung from the Free State died after he was knocked down by a minibus while on duty on the N3 near Villiers.

“Raymond Masango, a co-ordinator of traffic training delivery at the Road Traffic Management Corporation also died in a horrific multi-vehicle crash on the N3 near Harrismith.”

Here is a breakdown of fatalities in the rest of the provinces:

Health minister Dr Zweli Mkhize said on Tuesday that the suspension of alcohol sales has helped in the fight against Covid-19.
News
1 year ago

ikile Mbalula says his department has engaged scores of motorists and pedestrians on the importance of road safety during the festive season.
News
1 year ago

Breathalysers out, roadside routine in

If you’re stopped for suspected drink-driving this festive season, expect some old-fashioned treatment at the side of the road.
News
1 year ago