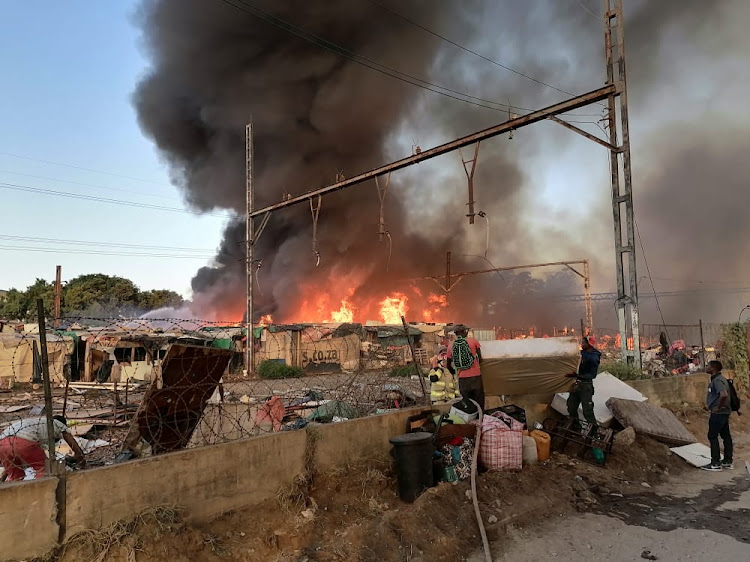 When Ayabonga Herman from Booysens informal settlement in Johannesburg left his workplace on Friday, he did not expect to arrive home to his shack reduced to a smouldering heap.

According to Joburg EMS spokesperson Nana Radebe, emergency services received the call at 4pm about shacks on fire at the informal settlement.

“Fire engines battled to get to the area, but fortunately we found another entrance. No fatalities or injuries were reported. The cause of the fire could not be determined,” Radebe said.

Though no fatalities were recorded, Herman and the rest of the people in the area have to rebuild their homes from scratch. More than 500 shacks were ravaged by the inferno.

@HermanMashaba RegionF team on the ground in Booysens ward 124 assisting devastated families who’ve lost their properties to the Fire which took place on Friday night, working together with NGOs by providing 500 Cooked meals, 250 Blankets and Water .💚 #ActAsOne @Action4SA pic.twitter.com/077Lo7dK7D

“It’s so painful to come home to nothing. We don’t know how we will begin again, but we can only hope the government will place people at a shelter in the meantime.

“Everything I owned is burnt in the fire. I only have my ID because I had it in my pocket. The rest is gone. I will have to buy furniture and other things afresh,” Herman said.

He said they suspect that the fire was started by a kerosene stove.

“People are trying to pick up their lives but it's devastating.”

Three shops in the Durban city centre were set alight by a group of protesters on Monday morning.
News
1 year ago

Two men who attempted to steal fuel from a Transnet pipeline in Mpumalanga got badly burnt — and arrested.
News
1 year ago