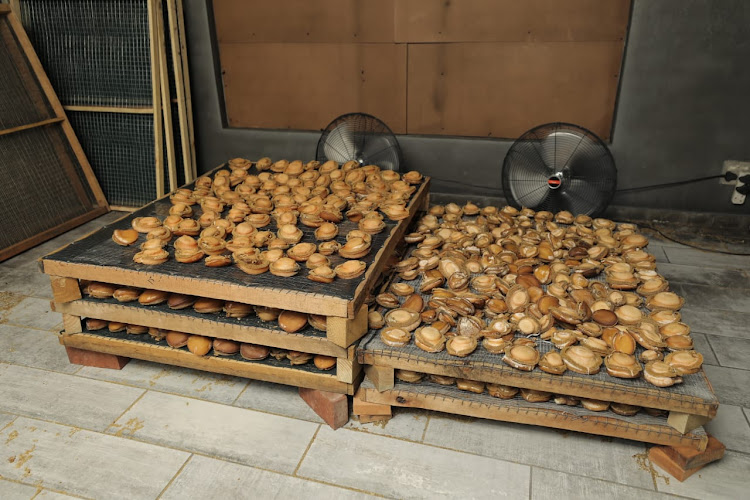 More than 1,000 units of dried abalone with an estimated value of R1.4m. File photo.
Image: Saps

Police are investigating a double murder in which alleged abalone smuggler Leon Titus and Patrick de Kock were gunned down during a rendezvous next to a farm road in Philippi, Cape Town, on Tuesday.

Western Cape police spokesperson Sgt Noloyiso Rwexana said the circumstances around the double murder, which occurred at 7.30pm along Weltevreden Road on Tuesday evening, were being investigated by Philippi police.

“According to reports, two men, aged 50 and 51, were shot and fatally wounded inside a Toyota bakkie by unidentified suspects, who are yet to be arrested,” said Rwexana.

“Police detectives are following up on leads to bring the perpetrators to book. The motive for the killing is unknown at this stage.”

According to police sources, Titus was alleged to have been a senior figure linked to the 28s prison gang affiliated Terrible Josters gang. They also state that he was a police informant with an affiliation to murdered alleged 28s boss Ernie Lastig.

However, it is claimed that his relationship with certain officers was allegedly mutually beneficial, with sources saying that information on illegal abalone consignments would be exchanged for money and de facto immunity for his own alleged smuggling operations.

Sources said the duo were waiting on the shoulder of Weltevreden Road in rural Philippi in a Toyota GT6 bakkie. Eyewitnesses reportedly said the shooting suspects arrived in a silver Toyota sedan and appeared to be talking to the duo from their vehicle on the opposite side of the road.

They then apparently fired 13 shots at Titus and De Kock before fleeing the scene.

Cape Town gang boss Ernie "Lastig" Solomon, 62, died in a hail of bullets in Gauteng on Friday.
News
1 year ago

Abalone worth more than R1m found at property in Cape Town

A man found in possession of abalone worth more than R1m in Cape Town is set to appear in court on Friday.
News
1 year ago

Gang battles in Ocean View, Cape Town, have prompted police to beef up their presence in the township.
News
1 year ago