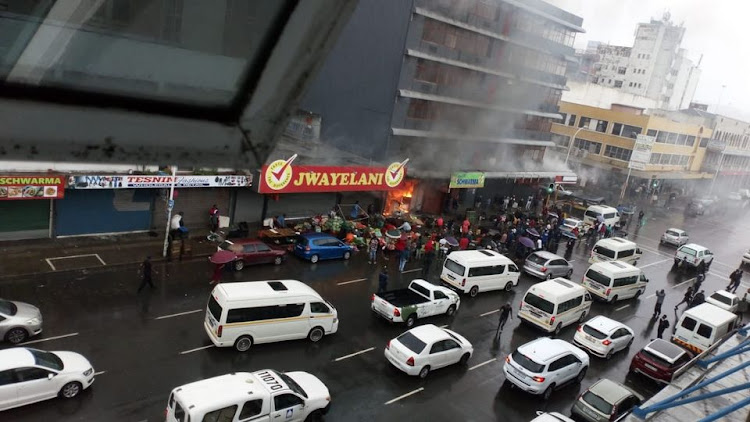 Durban firefighters swiftly contained a fire at a shop in the city centre on Monday morning.
Image: supplied

Foreigners trading in the Durban CBD have been left traumatised after their shops were looted and set alight earlier this week.

A group of Durban protesters allegedly threw flammable liquid into the shops, resulting in the loss of more than R400,000 for one family.

Here's what we know so far:

A shop owner who spoke to eNCA on Tuesday said of the incident: “We were inside. They came inside and they took whatever was in there and they threw petrol bombs in the shop, so we tried to save our lives. The total of the stock that we lost was about R400,000.”

Another shop owner said a group of about 35 to 40 people stormed into his shop and looted it before they set it alight.

Three shops in the Durban city centre were set alight by a group of protesters on Monday morning.
News
1 year ago

What was the protest about?

Police spokesperson Brig Jay Naicker said a group of protesters gathered at King Dinizulu Park where they wanted to hand over a memorandum. The group was informed by the police that they would not be allowed to protest.

Naicker said while this was happening, another group “converged in the city” and looted shops. Authorities told TimesLIVE that two shops and a stall belonging to a street vendor were set alight.

A case of attempted murder was opened by police against a protester who tried to stab an officer on Monday morning. Naicker said the police were restoring calm when the incident happened.

“They pursued the group and one suspect was arrested. He attempted to stab police officers during the arrest but was quickly subdued without any injury to any of the arresting officers,” he said.

“An operation is ongoing to identify and arrest the other perpetrators. A case of public violence has been opened for further investigation. The arrested suspect will also be charged with attempted murder.”

Law enforcement agencies in KwaZulu-Natal were on high alert on Monday amid reports of a looming truck protest.
News
1 year ago