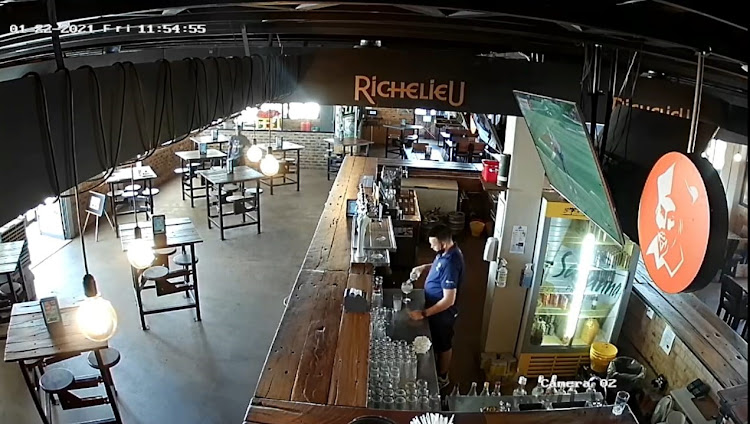 CCTV footage from Hennie's Moreleta Restaurant in Pretoria on Friday shows a manager pouring what he said was a non-alcoholic gin and tonic from a glass bottle.
Image: Supplied

A Pretoria-based businessman has threatened to sue the state after police detained his employee for eight hours on Friday night, for serving what he says was a nonalcoholic drink.

Werner Pretorius, 36, owner of Hennie's Moreleta Restaurant in Pretoria, is launching a civil claim against the state after his general manager, Atrayo Nolte, 31, was arrested by three police officers, who were adamant that a patron had been served an alcoholic gin. Under current lockdown level 3 restrictions, selling or distributing alcohol is a criminal offence.

The case eventually ended up in the Hatfield magistrate's court on Tuesday, where Pretorius' lawyer Alet Uys told TimesLIVE, a decision was taken not to enrol the matter.

Police and the National Prosecuting Authority have been approached for comment.

Nolte, speaking to TimesLIVE on Tuesday evening, said the incident happened just before midday on Friday, when three patrons had sat down for a meal.

Durban man arrested with R6,000 worth of illegal alcohol

A 55-year-old Durban man was arrested for dealing in liquor and being in possession of stock estimated at R6,000, KwaZulu-Natal police said on ...
News
11 months ago

“One of the guys approached the bar and was very persistent that he wanted us to serve them alcohol. We told him we didn't have it, and he agreed that they would have a nonalcoholic gin and tonic. He asked us to 'make it nice', and we explained that all he was going to get was a nonalcoholic drink,” said Nolte.

Nolte said an employee who was manning the bar on the day poured a nonalcoholic drink and served the men, who were seated outside.

“Two police officers in civilian clothes then entered. They didn't sign our Covid register or have their temperatures taken at the door. They walked up to me and asked me where our liquor was,” he said.

He claimed the officers were adamant that he had served alcohol to the men outside and wanted to know where the stock was.

“I told him our stock was in the storeroom, locked away. He ran outside and smelled and tasted the drink our bartender had poured and was convinced it was alcohol,” Nolte said.

Pretorius was not in Gauteng at the time of the incident, and had to talk to the police and his staff via cellphone.

“My staff even showed the cops the empty bottle of Soho nonalcoholic gin that was poured. They were having none of it. They just wanted to know where our storeroom was,” he said.

The officers, who introduced themselves as being from the Johannesburg South precinct, said they were confiscating all of their stock.

“I told my staff to immediately do a stock take and assist with an inventory list. They even helped load all the alcohol — worth about R112,000 — into the vehicles,” said Pretorius.

Nolte was then instructed that he would need to meet the cops at the Garsfontein police station to sign a declaration form.

Once the law is in place, the government will have a zero-tolerance approach to alcohol consumption by drivers.
News
11 months ago

“They literally told me I was not going to be arrested; I would just need to sign a form to declare all the items confiscated,” he said.

But this was not to be. Shortly after getting to the station, he was put into a police cell with a host of others, none of whom were wearing masks.

“I can take care of myself but I have a five-months pregnant wife at home and two young children. Can you imagine what she was going through because she couldn't get hold of me as they had confiscated my phone? She was terribly traumatised,” said Nolte.

Understanding the seriousness of the charges, Pretorius hired Uys, a private attorney.

“I arranged that one of my counsel go to the police station and wait there until I was able to arrange for an advocate to grant him station bail,” Uys told TimesLIVE.

Uys said he appeared in the Hatfield magistrate's court on Tuesday for charges relating to contravening the Disaster Management Act.

“The lead prosecutor took the decision to not enrol the matter, saying there was no concrete evidence and that the case would be based on hearsay. The prosecutor also gave us her word that he (Nolte) would not get a criminal record for this,” she said.

A document from the court sent to TimesLIVE states that the matter was “not enrolled — excused”. It is dated and signed Tuesday, January 26. 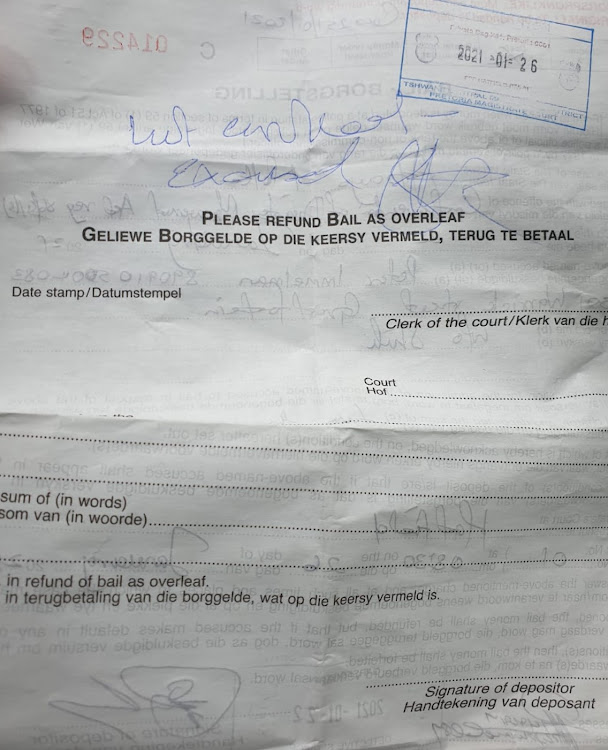 Not enrolled - excused. That's what was written on the back of Nolte's bail form after the state chose not to enrol the matter due to the lack of concrete evidence on Tuesday.
Image: Supplied

Despite having already forked out for legal fees and bail, Uys confirmed that Pretorius had instructed her to take the matter further by launching a civil claim.

“There is so much that was irregular about this arrest and the confiscation of the alcohol. All three police officers refused to sign the Covid-19 register and didn't want their temperatures taken. The same thing applied at the Garsfontein station; no-one was tested for temperature, no-one was asked to fill in any Covid-19 forms.

“So the irony is that police are the ones who actually didn't comply [with Covid protocols]," said Uys.

Pretorius said police had not yet released his stock as they required the docket back from the state before doing so.

“I don't know why but I have a feeling they were after my stock. That's all they seemed to worry about,” he said.

CAIPHUS KGOSANA | This is an intervention: restaurants have an alcohol problem

How come is it that booze accounts for more than two thirds of their profit margins?
Opinion & Analysis
11 months ago

Can the national anthem be used to sell beer? The answer, according to the ad watchdog, is yes.
News
11 months ago