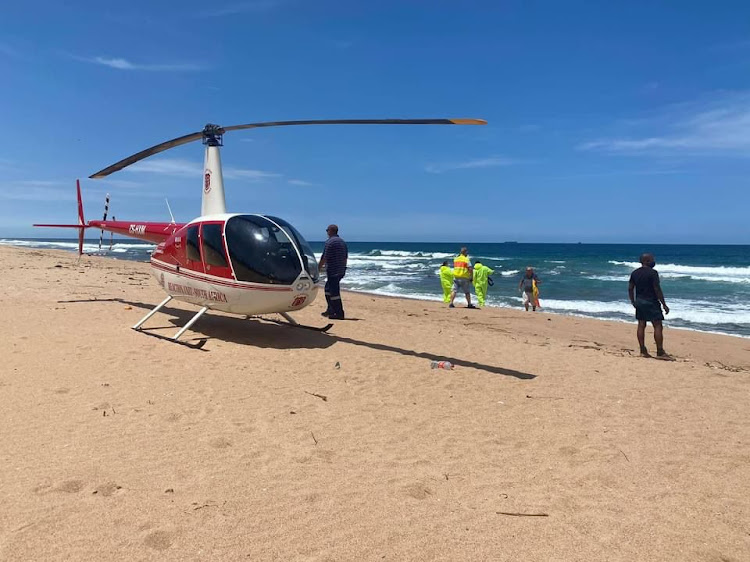 Rescue personnel on La Mercy Beach, north of Durban, on Friday after a father, his son and their dog drowned while swimming.
Image: RUSA

Tragedy struck on Friday when a 44-year-old father, his 14-year-old son and their dog,  believed to have attempted to save them, drowned at La Mercy Beach, north of Durban.

Shawn Herbst of Netcare 911 said paramedics responded to a report about a drowning  north of La Mercy Lagoon shortly after midday.

“Reports indicate an adult male, a male minor and their pet dog had drowned after swimming at an unprotected beach. All were declared deceased after being removed from the surf,” said Herbst.

“Circumstances leading up to the incident will be investigated by the relevant authorities.”

Reaction Unit SA said the incident was witnessed by the deceased father’s 18-year-old son, who was also swept out but managed to grab onto rocks and exit the water.

“According to a witness, the father and son were swimming when they began to experience difficulty. Their dog entered the water in what is believed to be a rescue attempt but it also drowned.”

The search for a missing two-year-old girl resumed on Friday after the vehicle her mother had been driving plunged down the notorious Voëlklip cliff ...
News
8 months ago

Four Gauteng holidaymakers are expected to appear in the Ramsgate magistrate's court on Thursday after a brawl with lifesavers at Manaba beach on the ...
News
9 months ago

Covid-19 lockdown has hit the NSRI’s schools programme, with less than half the planned number of children getting water safety lessons this year ...
News
10 months ago