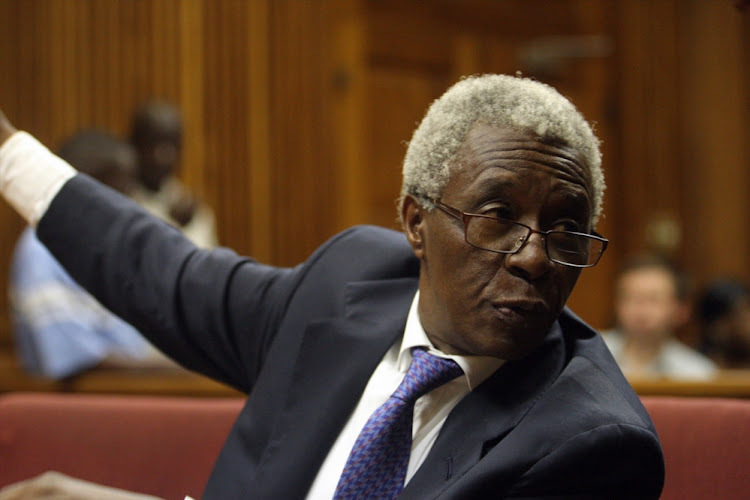 Nkola Motata retains all benefits due to judges, years after he crashed into a wall and used racial language towards the home owner.
Image: Gallo Images/Sowetan/Veli Nhlapo

Freedom Under Law (FUL) has won the first round of its battle to have retired judge Nkola Motata impeached.

In a judgment on Thursday, the North Gauteng High Court granted permission for the organisation to include Motata as a respondent in its application for a review of a Judicial Service Commission (JSC) decision.

There was no order on costs.

In its application, FUL was seeking to review and set aside the JSC decision to find Motata guilty of misconduct instead of gross misconduct.

Motata was convicted of driving under the influence in 2009 by the Johannesburg high court, which sentenced him to a fine of R20,000 or 12 months’ imprisonment.

The matter was later referred to the Judicial Conduct Tribunal, which found Motata guilty of gross misconduct and recommended to the JSC that it start proceedings to remove Motata as a judge.

The tribunal found that Motata’s conduct at the scene of the car accident‚ and the remarks he made at the time‚ were racist and prejudicial to the impartiality and dignity of the courts.

However, the JSC overruled the tribunal decision and found that Motata's conduct did not warrant his removal from office.

Instead, the JSC found Motata guilty of misconduct.

The JSC said Motata should pay a fine of R1.1m to the SA Judicial Education Institute over a period not more than 24 months from the date of the JSC decision.

Motata retired in 2018 with all benefits due to a judge, including a salary for life.

Judiciary must be seen to be impartial with its own

Last October, no fewer than 12 years after he got drunk, drove his Jaguar into the wall of a Johannesburg house and aimed racist slurs at its owner, ...
Opinion & Analysis
2 years ago

'Drunk judge' Motata fined R1.1m for misconduct, gets to keep salary for life

The Judicial Service Commission has found that Judge Nkola Motata's conduct did not warrant his removal from office.
News
2 years ago