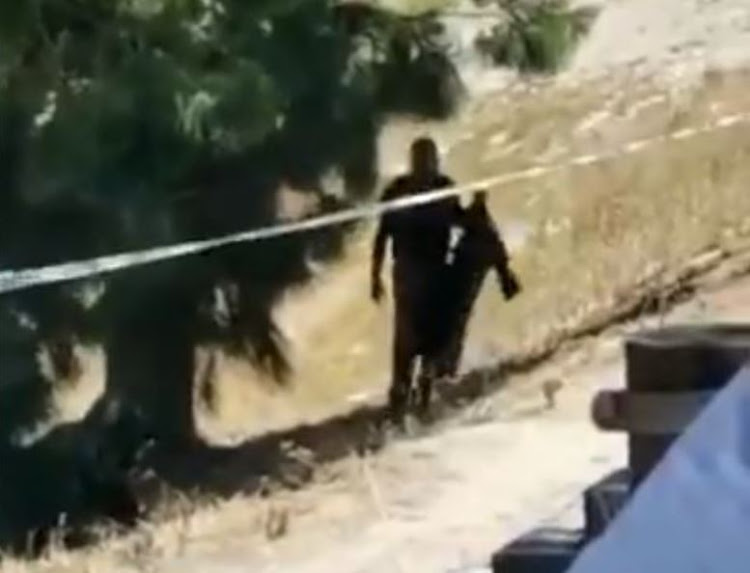 The scene on January 30 2021 in Macassar, Cape Town, where a cash-in-transit guard had an explosive device strapped to his body by robbers.
Image: Twitter/Bosbeer2006

SA’s cash-in-transit industry has been thrown into turmoil after a gang of armed robbers hijacked an SBV officer and strapped a bomb to him as he serviced an ATM.

The attack on the SBV officers took place on Saturday in Macassar, Cape Town, is the first of its kind, according to criminologists.

“This is alarming. It’s a totally new tactic, and is driven by the improved security to cash vans,” criminologist Dr Hennie Lochner told TimesLIVE.

He warned that news of the new modus operandi would spread quickly among CIT robbery gangs.

“This is what the Islamic State has been doing. The problem with an attack like this is that you can kill all the robbers on the scene, but the bomb’s trigger man can be somewhere else, with a cellphone, and all he needs to do is make the call to the device and the bomb goes off.

“This is going to get a lot worse. It shows how vulnerable CIT guards are. What happens when these robbers start strapping explosives to civilians?”

A police bomb disposal team disarmed an explosive device strapped to the body of a hijacked cash-in-transit guard in Cape Town on Saturday.
News
8 months ago

In a statement released on Saturday, SBV said an unknown number of suspects were involved in the attack.

“While servicing an ATM, two of our first-level maintenance teams were hijacked and were later released unharmed on the N2 near Macassar. One of the staff members had an explosive device strapped to his body, which has been disarmed and safely removed from the scene.”

SBV Group CEO Mark Barrett said on Saturday that criminals continued to invent “new, brazen and more violent ways in an attempt to get to the money.”

“Out of the 293 CIT robberies last year, SBV had three against their vehicles and staff. With the company’s security measures in place, robbers are naturally going to ramp up the measures they use to get to the cash.”

He said the new modus operandi posed a new level of threat to the CIT industry, its staff and the public.

“Already we have seen CIT gangs deploying new tactics, where they kidnap staff of cash management companies and their families to force them to reveal information on how money is moved and stored. But this [the strapping of explosives to a guard] is a totally new development, which everyone should be very worried about.”

SA's cash heist season has struck early, with armed gangs carrying out waves of deadly attacks in which at least 56 people died and dozens were ...
News
1 year ago

The woman accused of pulling off a brazen R4m theft from an SBV depot in Midrand, by strolling off with cash stuffed in refuse bags inside a trolley, ...
News
1 year ago

The head of an alleged cash-in-transit robber was blown off when the gang he was part of tried to blast open a van on Wednesday morning near ...
News
9 months ago