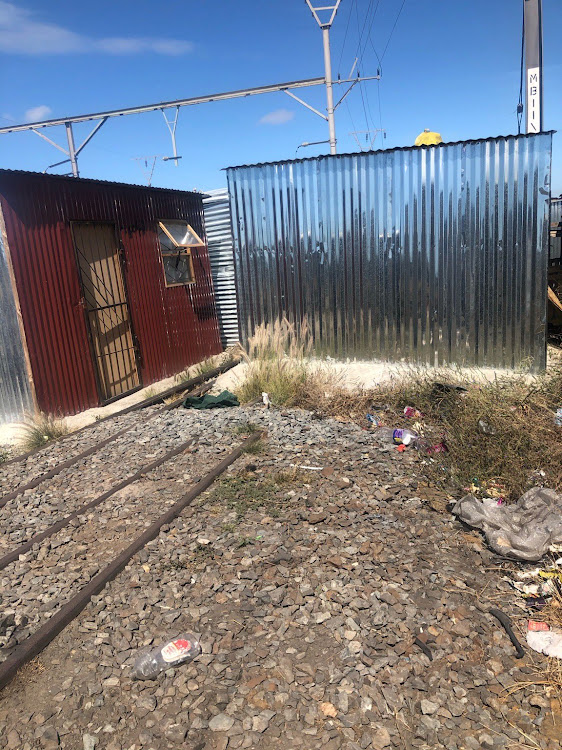 Prasa said on Monday that people had allegedly paid R9,000 and then erected their shacks on the central railway line in Langa, Cape Town. The agency's board, led by chairperson Leonard Ramatlakane, visited the central line on Monday to establish how the tracks had been occupied.

“In his engagement with the people illegally occupying the tracks, Ramatlakane was informed by the illegal occupiers that they had been sold the sites in Prasa's operational tunnel for about R9,000,” Prasa said in a statement.

It said the illegal occupiers declined to say from whom they bought the sites.

“The chairperson of Prasa confirmed that Prasa at no time mandated any person to sell sites on the rails tracks, as the said tracks are Prasa property and specifically demarcated for trains. He reiterated that no Prasa rail tracks, or any rail track in the country, was demarcated for human settlement,” the statement read.

It added that Ramatlakane would take a Prasa delegation to the Western Cape government and the City of Cape Town to help find and/or identify a suitable site on which to relocate the illegal occupants — this for their own safety and to enable Prasa to start much-needed restoration of infrastructure.

Ramatlakane will lead the delegation on Tuesday to persuade the shack dwellers to vacate the rail tracks.

“Prasa wishes to resume the rail services on the central line in Cape Town and in Pretoria [the Mabopane line] and urges the community to vacate the rail tracks voluntarily and peacefully. The central rail corridors are the region’s highest-volume services. Prasa is aware that since its trains are not in service transportation costs of commuters have escalated dramatically. Further, it is in the interest of the public at large to have the trains back to relieve traffic congestion,” the agency said.

Prasa said it was ready to run train services from Cape Town to Langa and had appointed consultants who will prepare designs and help in managing the construction of walls, along with the Prasa servitude.

“To this end tenders have already been advertised to reinstate the power supply systems so that trains are able to operate safely on the line. These infrastructure works cannot start in the areas where there are illegal land invasions and illegal settlements. Prasa will temporarily use diesel locomotives while the process of repairing the infrastructure is under way,” the statement read.

Residents of Airport Park next to the East London Airport who lost their homes and possessions during government demolitions are waiting to hear when ...
News
1 year ago

Noma Sozwe spent most of Sunday rebuilding her daughters' two shacks after the structures were demolished by a group of people who wanted to occupy ...
News
1 year ago