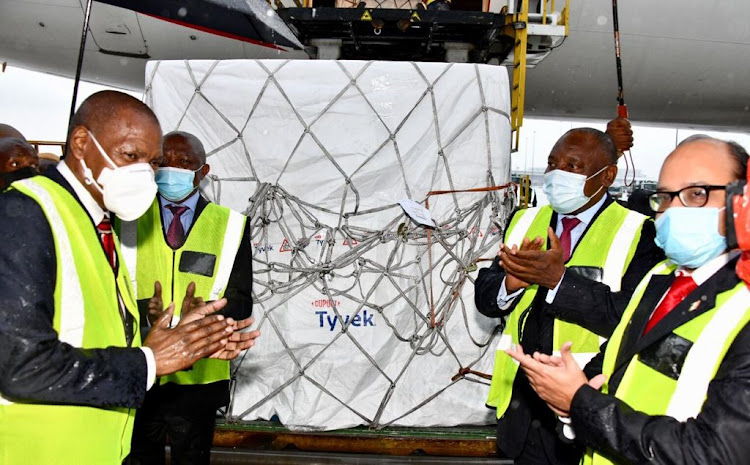 From left to right: Health minister Zweli Mkhize, Deputy President David Mabuza and President Cyril Ramaphosa were among the government representatives who witnessed the arrival of Covid-19 vaccines from India.
Image: GCIS

South Africans of Indian origin vented on social media on Monday night, expressing their anger with President Cyril Ramaphosa for an apparent snub to the Indian government in his address to the nation.

In Facebook posts, several asked why the president had only thanked MTN and Cuba in his address on Monday night, a few hours after receiving the country’s first batch of Covid-19 vaccines from India.

Some users said given the country’s historical and cultural ties with the subcontinent, which was the first to deliver when SA was facing criticism for not securing the vaccines quickly, the president should have used the opportunity to pay tribute to India.

A post by an unknown author then made its rounds on WhatsApp.

“Dear Mr President. Your address tonight was shockingly disgraceful and sadly lacked international protocol. You made a point of thanking by name several parties, including a cellphone company and the Cubans, yet you completely omitted to mention or thank the Indian government which so graciously donated one million vaccines to the people of SA.”

President Cyril Ramaphosa will address the nation at 8pm about the latest developments regarding Covid-19.
Politics
1 year ago

However, while many said the lack of acknowledgement of India was disgraceful, others argued that Ramaphosa did not need to thank the Indian government as the vaccine procurement was a business deal.

On Monday afternoon, Ramaphosa led a government delegation to welcome the arrival of the first batch of AstraZeneca vaccines from India. The vaccine has undergone successful trials at Oxford University.

Chairperson of the international relations and co-operation portfolio committee Tandi Mahambehlala on Tuesday said the arrival of the first batch of Covid-19 vaccines from India signified the success of SA’s approach to bilateral and multilateral relations.

“We congratulate the department of international relations and co-operation, through its missions abroad, for their candid vaccine diplomacy. This has been demonstrated through its successful initiation of negotiations, which secured the first batch of Covid-19 vaccines for SA,” she said.

“We also extend our gratitude to the friendly government of India, a true friend in need and a trusted partner in the Brics [Brazil, Russia, India, China, SA] formation, for prioritising SA to receive its first batch of the vaccine to fight the pandemic.

“The importance of diplomacy has once again been proved and is apparent for all to see during the pandemic outbreak. The country under the capable stewardship of President Cyril Ramaphosa should work hard and enhance bilateral and multilateral relations with countries and multinational pharmaceutical companies that have shown capability in manufacturing the vaccines.”

KwaZulu-Natal premier Sihle Zikalala on Tuesday thanked India for its support and solidarity.

“We extend our heartfelt appreciation and thank the people and government of India for their solidarity and support. Because of them, for the first time we can say we have a strong and direct line of defence against the coronavirus,” he said.

The presidency and consulate general of India did not respond to requests for comment.

University of KwaZulu-Natal political analyst Dr Lubna Nadvi told TimesLIVE the president was not obliged to thank the government of India.

“His task was to outline to South Africans the facts about the vaccine, where it was purchased from, how many doses and how citizens would be vaccinated. He further highlighted other sources through which more vaccines would be sourced and when.

“These are all business transactions and have no bearing on personal and historical relationships between states. The first shipment of vaccines could have actually come from anywhere,” she said.

SA has officially received its first batch of Covid-19 doses, which President Cyril Ramaphosa hailed as a major milestone in the fight against the ...
News
1 year ago

An online database is being set up to register for the vaccine. A post-vaccination care and support team will monitor if anyone experiences adverse ...
News
1 year ago

The first shipment of one million doses of the Oxford AstraZeneca Covid-19 vaccine is en route to SA and due to arrive in Johannesburg on Monday. ...
News
1 year ago