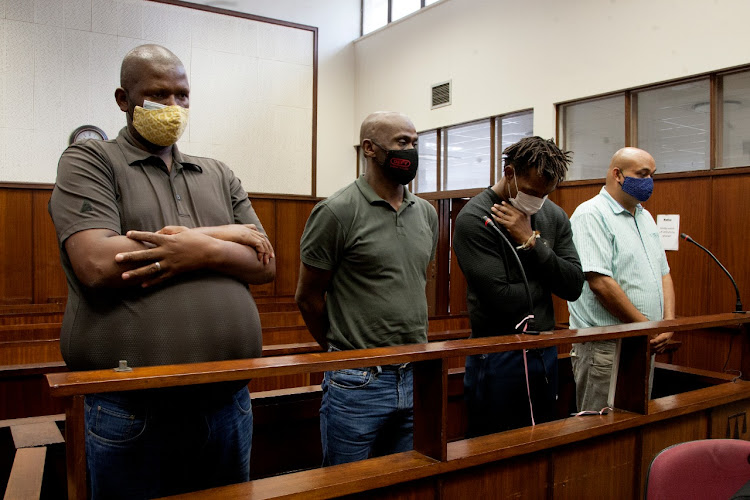 The four men accused of assaulting and robbing a South African woman and her foreign boyfriend were granted bail in the Durban magistrate's court on Wednesday.

Basize Nhlumayo, Jabulani Mthethwa, Siyabonga Mnyandu and Lylle Lloyds, who were all charged with two counts of robbery in aggravating circumstances, were granted R3,000 bail.

The suspects were arrested during a heated confrontation with eThekwini metro police officers after an alleged robbery incident at a Durban shop during a demonstration organised and led by the Umkhonto we Sizwe Military Veterans Association (MKMVA) on January 25.

At least two more shops, and a stall belonging to a street vendor, were also allegedly looted.

In a memorandum submitted to premier Sihle Zikalala, the MKMVA members detailed their anti-foreigner sentiment and also rejected the use of masks and Covid-19 vaccines.

According to the charge sheet, the couple were walking in Durban when they were robbed by about 15 people. They were only able to identify the four suspects.

Accused number two, Mthethwa, is understood to be an MKMVA member who works in the KZN premier’s office as a community outreach officer.

The charge sheet detailed that during the alleged assault, other people approached and helped themselves to the couple's belongings.

The state told the court, however, that none of these were items that were recovered from the suspects by the police.

The court also heard that the woman sustained injuries after she was allegedly assaulted for dating the foreigner.

Somali shop owners and caretakers are scared for their lives after attacks on their shops on successive days in Atteridgeville, west of Pretoria, ...
News
7 months ago

Immigrant shop owners in Durban say they fear for their lives after looting and vandalising of their businesses on Monday and Tuesday.
News
10 months ago

The ANC in KwaZulu-Natal has condemned attacks on foreign-owned shops in the Durban city centre on Monday.
Politics
9 months ago