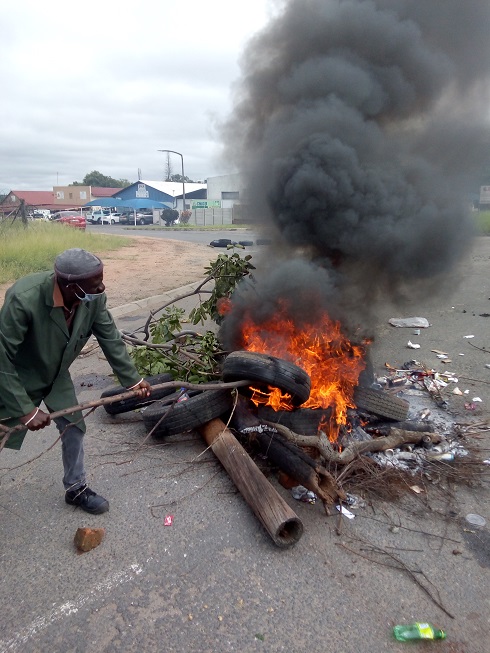 A member of the Ba-Phalaborwa Community Forum adds fuel to the fire as protesters demonstrate outside a Foskor mine in Limpopo on Wednesday.
Image: Mashudu Sadike

Production at Foskor's mine in Phalaborwa, Limpopo, came to a halt on Wednesday as community members protested outside.

The protesters — who blockaded the entrance to the mine with burnt tyres and debris — were demanding jobs and contract work at the mine. It comes after a Pretoria firm was contracted for a multimillion-rand deal to supply oil to the mine.

The protesters, affiliated to the Ba-Phalaborwa Community Forum (PCF), did not allow employees of the mine to enter or exit.

PCF secretary Given Risenga complained that the company, Advent Oil, had not introduced themselves to the community in and around Phalaborwa, and did not hold discussions about employing locals.

“Advent Oil comes all the way from Gauteng with their own employees to come work our land, while hundreds of local community members are unemployed and live in poverty,” Risinga said.

He said Foskor had set up a meeting between Advent Oil and PCF for Friday, but vowed to continue with protests until their demands were met.

“No-one is going in or out of these gates, even tomorrow,” he said.

Foskor's is one of the biggest phosphate acid open pit mines in Limpopo.

Police minister Bheki Cele has conceeded that SAPS management "dropped the ball" in their treatment of Sassa grant applicants who were were sprayed ...
News
1 year ago

While the protest did not cause any major disruptions, some employees were sent home around 10am for their safety.

Foskor spokesperson Hulisani Nemaxwi confirmed that the two parties would meet on Friday.

“Production was low today due to the protest and there were some criminal disruptions, but the situation is calmer now,” Nemaxwi said.

He said the mine was committed to ensuring that local people were considered where there were job opportunities directly through contractors.

Officers from Phalaborwa police station were monitoring the situation.

No schmoozing and boozing as the Mining Indaba goes online

For the mining industry, it means not only forgoing Cape Town's famed wines, vistas and sun but also a key deal-making and networking opportunity.
Business Times
1 year ago

Experts believe cash-in-transit gangs are behind attacks on gold mines, with R52m stolen since 2018
News
1 year ago

A farmer died on Tuesday after a speeding tractor overturned in central Delhi, according to Indian police, amid clashes with farmers.
News
1 year ago